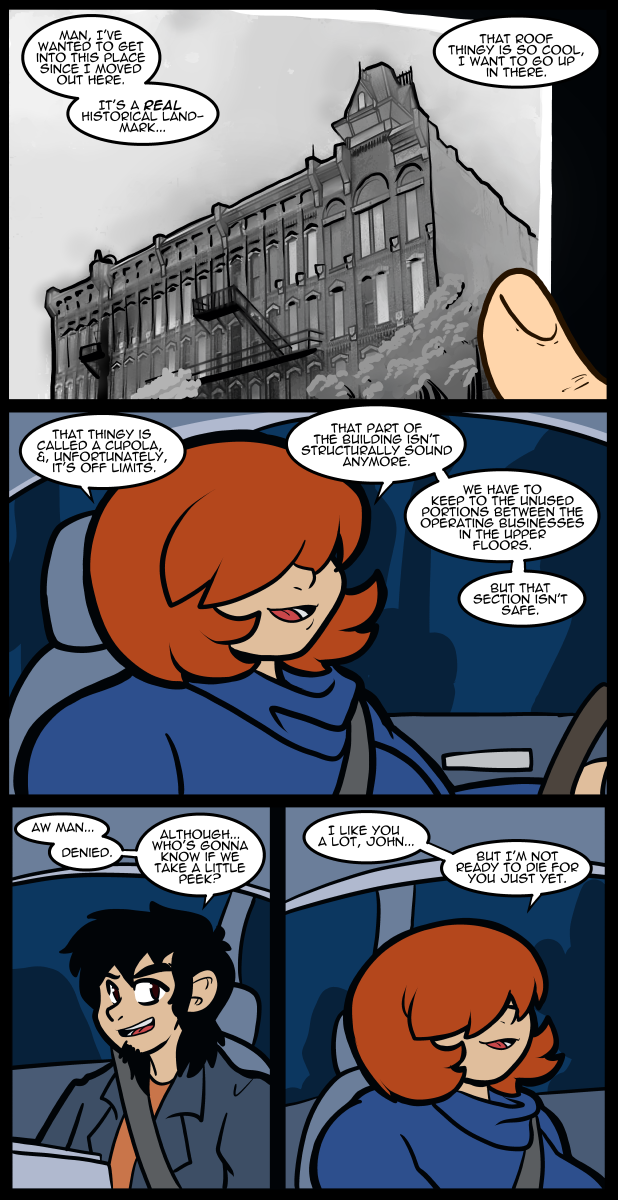 It was the final Splafest for Splatoon 2 last weekend. It’s always strange to think about stuff like that because it’s an experience locked to one point in time. It may not be an important part of history, but it is lost. Kind of like the special online features in KOTOR for the xbox. I have them saved to my old one, but I don’t want to break it out to play it on that. Do new versions have it? I don’t know. Maybe. It’s impossible to save everything about a culture. Sometimes you just get swallowed up by time and it’s like you never were. Maybe it’s like that for everyone and everything eventually.

Alex continues showing off her ability to deliver deep lines in that last panel.

Also, is the first panel of a real building, and if so, where?

This segment was hypothetically hosted by Robert Stack.

It’s the ‘yet’ that really makes it on that final line imo. I honestly see John getting together with Alex so much more than Reggie. The latter has just been doing the same thing he always does, which, admittedly, is not a bad thing. He met a woman he found attractive (smart) and treated her with respect and charm – but he would do that to any other woman of his type. John and Alex… well now. Alex changed John’s entire outlook on women, and made him reconsider what he wanted in a partner – he’s clearly outmatched, but he accepts that and just plays the game with her, and in his own way, that’s how he’s keeping up, which I think is something Alex finds attractive as well – someone who *works* to earn her affection.Or I could just be reading way too much into stuff, but yeah, that’s how the dynamic between these three comes across to me.

Also, I hear you. I was part of a forum coupled to a petsite for close to a decade, and eventually to the owner it had just become something to make money. But the forum was its own little community, with people met over the course of years. And then one day, the owner decided to throw a fit and he just deleted the entire forum – years of posts and friend lists and everything, just gone. I’ve since found some people I was close to back, but that was still a special place and special time that was its own thing and then just… disappeared.

I like your analysis and I agree, John is a good match for Alex, at least from what we’ve seen so far. :)

Whoa, Windsor Hotel, what a blast from the past. Though your comic’s characters and storyline are awesome and they stand on their own, the tidbits of history that I can recognize always add a little thrill when I check the new pages.

Pretty much anyone from Garden should recognize the structure, it’s iconic but the city has always been tepid about actually keeping it in decent shape, which really shows the short sightedness of people.

Too true. I always thought that if I ended up with a stupid amount of money, I would restore it and several other sites there to its former glory days, but I don’t doubt that the investment would be lost on a community that gives so few fucks.

On the KotOR online stuff, if you’re referring to Yavin Station, the PC version has it.

Oh man!
A big, TALL, scary building! o.0
Does the photo of the building, remind anyone else of the Disney ride, “The Twilight Zone Tower of Terror”?

On Twitter, Jackie created the idea of- a baskeball playing, Bruce Wayne adventure.
He calls it The Dunk Knight.

I would read that comic. Sign me up! :D

“Sometimes you just get swallowed up by time and it’s like you never were. ”

“Our works have all faded, our kings but a list
The faintest of ghosts, we won’t even be mourned.
It was by creation we hoped to persist
Yet all we created is shattered and scorned.

What has become of the tablets of law
Broken to shards that no whisk will reveal
Clay that our scholars once studied with awe
Dust ground to dust by a plundering heel!”

I met a traveller from an antique land,
Who said, “Two vast and trunkless legs of stone
Stand in the desert… Near them, on the sand,
Half sunk a shattered visage lies, whose frown,
And wrinkled lip, and sneer of cold command,
Tell that its sculptor well those passions read
Which yet survive, stamped on these lifeless things,
The hand that mocked them, and the heart that fed;
And on the pedestal, these words appear:
My name is Ozymandias, King of Kings;
Look on my Works, ye Mighty, and despair!
Nothing beside remains. Round the decay
Of that colossal Wreck, boundless and bare
The lone and level sands stretch far away.”

As Marcus Iunius Brutus is alleged to have said, Sic semper tyrannis”.

“There was a time
I knew a lad,
Who went out on the sea…

I never saw that lad again.
I guess that he was me…”

Re: your remarks about cultures, Jackie:

How much of that interpretation is made up of romanticization?

I have worked in buildings like that. When I was training to be a road supervisor for security, I was sent to an old mill not far from where I live now. The duty guard warned me, “Stay away from the southeast corner on the third floor.” She was right. The roof had been leaking there for years and the floor was iffy.