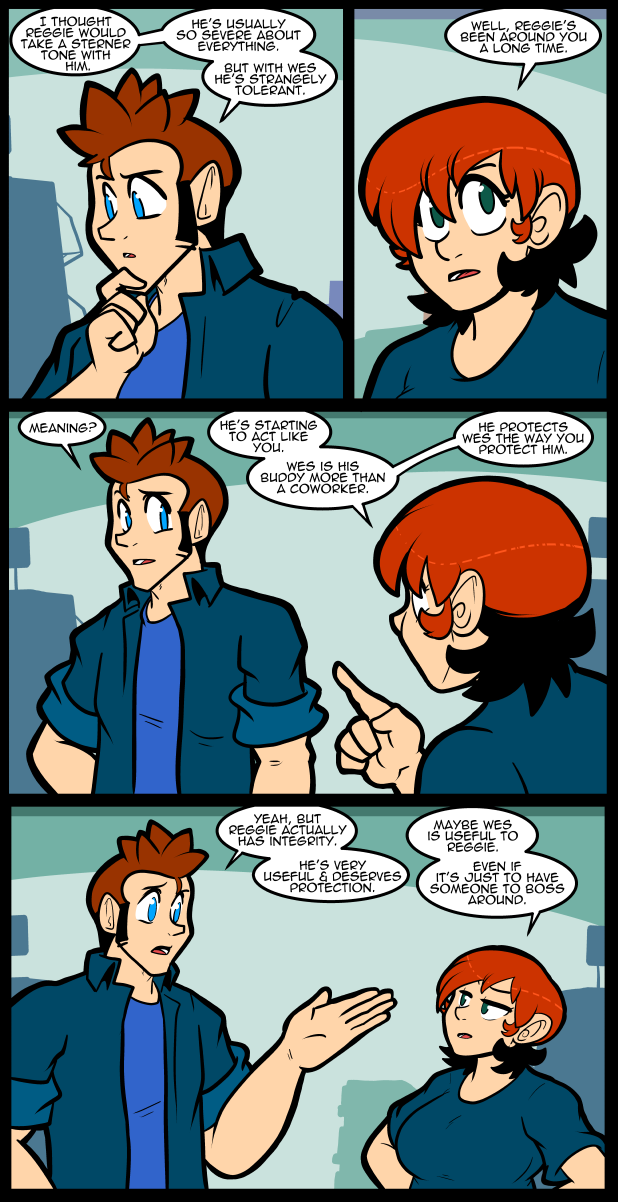 Before I talk about anything else I’m going to plug my Patreon for a minute. I almost never do it so it won’t be annoying, but tax time always knocks out a swathe of supporters. The patreon is what keeps the comics coming, so if you like it please consider supporting it. Also, if you’re ideologically opposed to Patreon I also have a Subscribestar account as well. (I can’t actually withdraw money from it at the moment, but maybe someday…) I will try to refrain from pestering you fine people about this, but it is important to keep the lights on as it were.

I was having a really bad night when I was drawing this page. Sometimes my inner workings just won’t go along with me & things end up looking off to me. Most people won’t notice, but I know. Sometimes my allergies will reach this crescendo of symptoms that will make it impossible to fall completely asleep. The last three days have been like that & the result is sort of a half functional brain. Most people would say “You seem fine on social media.” & that’s because I have years of faking my actual status under my belt. I can function reasonably well on the broken software that is my consciousness. After the last 7 years I’ve been so plagued by problems that what’s wrong with me now seems relatively minor. If I could drop 50 pounds I’d probably be a whole new person practically. In any case I’m still a bit off. My brain won’t make the chemical that makes me feel sleepy, so what it does instead is make me dizzy, or makes me want to cry. Sometimes both. At the moment I’m rested enough physically that it’s only doing dizziness. This is probably the last day of that before my body does a hard reset on this issue & I’m sorted out. Eventually other systems take over for the ones being sabotaged by pollen, or whatever it is that’s causing the reaction.
Anyway, as far as the page goes this is still pretty good all things considered. I’ve been powering through this stuff for so long I think I can do most of the art just on the strength of muscle memory. I tried to get my bearings with a sketch earlier but looking at it now I realize I was way further off with it than I realized at the time. I feel like I was really on a roll with the D&D stuff but the streak had to come to an end eventually & switching scenes was the break.

I dislike pointing it out but- other typos:
starting, + not staring…in panel 3, and…deserves…in panel 4.
But- Jackie’s been feeling poorly, health-wise, so I don’t care about typos. Whatever floats your boat, and all of that.

Probably, also- “the way you protect him”, in panel 3.

I’ve been through this page and fixed several things. I need one person who can find all of them at once so I don’t have to keep doing it…

It’s my own fault for not taking my time & doing it right the first time.

Coolness. Everything is cool. :D

I only try to help Mister J out.

The Joker has been a little frazzled about Gotham city, lately! :D

I kind of know what you mean about health, Jackie- I probably don’t eat enough…because I worry about people sneering at me w/ a larger silhouette, and I probably don’t take enough water + exercise, or do all of those “happy, healthy” things that the blinking, daffy, boy scouts + girl scouts told me to do. To me, doing healthy things is just a pest. People can think ill or well about me, but that’s just how I am. *shrugs*
*awaiting the flame comments from some current boy scouts + girl scouts* ;)

Thomas’s hair seems to be getting increasingly anime.

It is only a matter of time before he goes full super saiyan on one of the customers.

I can see why Carol is such a talented manager. People who aren’t good at dealing with other people often fail at understanding that others don’t always view utility in the same way, that there are some (many) who consider “enhancement of ego” as much an asset as “makes my life easier” or “provides me with material reward.” I suspect if her ambitions were greater, she could go much further in terms of influence or power :)

Well, she was supposed to become assistant manager, but Thomas made that not happen not to lose her when she would have been used as a fuse by the company

Dang it. Formatted my computer and my pseudo was gone

Aw, look at him complimenting Reggie behind his back. One day he’s gonna overhear.

Panel 3, Carol from the most difficult angle. Reminds me a bit of Hajime no Ippo, where it turns up frequently.