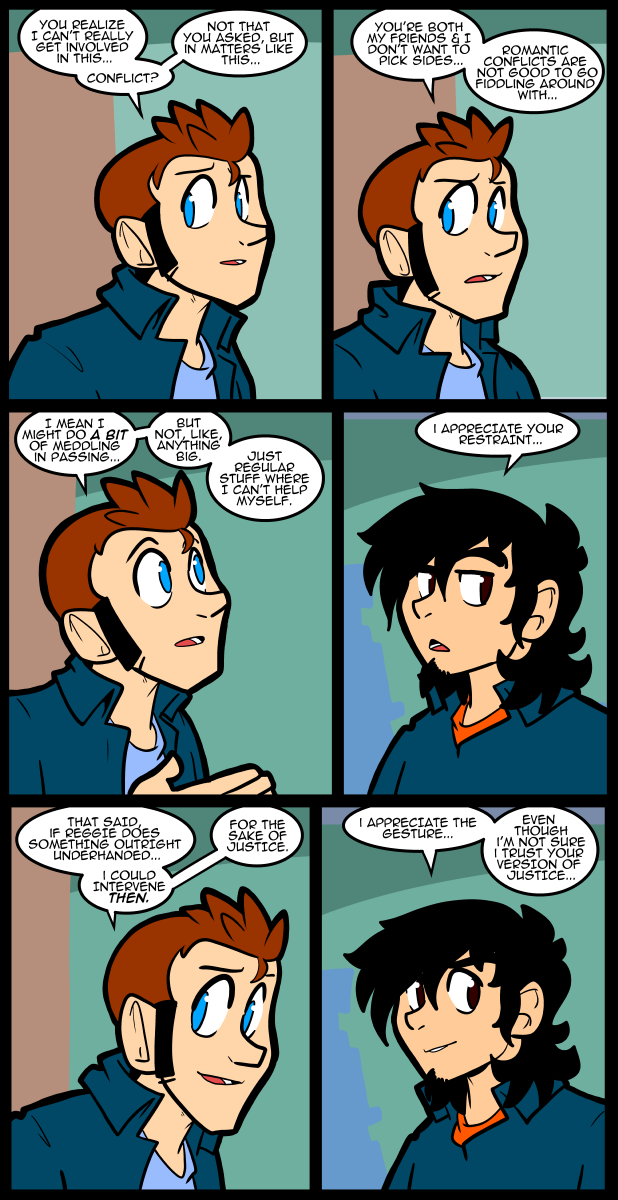 What a fucking week. It’s only Tuesday and it’s been a fresh hell every day. On the one hand I’ve been mentally sharper recently than I have in a long time, on the other I’ve felt generally sick almost every day for several days. Some days I sleep almost not at all and feel fine, others I just can’t seem to sleep enough. Some days I’m not very sore and others I’m in so much pain I can hardly stand it. On top of that the constant political bickering that has bled into every aspect of daily life has become unbearable. Someone is always doing something, or saying something, that sends mobs rampaging around doing fuck knows what to whoever happens along. The constant worry is really getting to me.
I might just take Xmas off this year. Or maybe post a one off comic or something. I haven’t not worked over the holidays in over a decade. We’re coming down to the last few Christmases I’ll ever have with most of my family, so I kind of want to be present. That said I don’t know what I would do if I wasn’t always thinking about working on the comic. Pushing everything else out by not leaving room for anything else is basically my coping mechanism. I guess I’ll cross that bridge when I come to it. I always say I’m going to take a day off but I never actually do it. This is basically all I am now. A weird fat guy scribbling furiously at all hours of the day and night. Could be worse.

you have made one of the most consistent and enjoyable webcomics around. i dont think anyone will be upset if you take a holiday off.

Zo just to be clear, we must wait to take off every zig?

Somebody set up us the bomb!

You have no chance to survive make your time!!!

How are you gentlemen?

You know what you doing!

All your base are belong to us!

Sure, go for the low-hanging fruit.

Is this better?
“I know Frankenstein. I used to date his sister, Phyllis.”

Please take whatever time you feel you need to take to be with your family. We’ll still be here when you get back.

Hell, Eric Schwartz over at Sabrina Online did 3-5 strips a month and SO ran for 20 years before he did a soft ending w/only semi-regular updates.

It’s all good-do what you gotta!

Just as an FYI, my Dad passed away recently…and one of the things that made it bearable was we saw it coming, and everyone made sure to say what they wanted to, and he *KNEW* he was loved, and that we’d be able to carry on, and carry out his wishes, when he wasn’t here. (He was happy to know he was getting his Wake, for an easy example)

I love your comic, but no way in hell would I want it to take priority over your life.

My Dad too died this year (The same day my daughter got married)… We knew it was coming for more than a year, and I don’t think it helped at all.

Everything pretty much stopped in life for around a month.

Take the time you need, Jackie, and don’t worry about us. We’ll be fine.

Was completely unsurprising when my Dad passed away, but it was kind of surprising how much it hurt all the same. Take your time, think up some plot twists, love your family, and hopefully come back rejuvenated. Whenever you’re ready. We’ll be here.

Please do take some time off. If you really want to put up something for right after Christmas, I do agree that a single-panel image is a great idea. Whatever is easy and fun for you to draw… someone wearing a Christmas hat, or something equally easy.

I would love to see a picture of Jo looking surprised because she just realized she was standing under a mistletoe sprig. Your facial expressions are great and I would love to see that one. But it’s only a suggestion and if it would be in any way difficult I withdraw it.

Take it easy, hang with your family. We’ll still be around after the holiday. You make one of my favorite comics and you have totally earned some time to relax.

just do it, we will wait for you.

You could be a weird fat guy with absolutely nothing to do. That’d be worse.

But, yeah, go right ahead and one-off. Not a huge problem. That week’s half-dead anyway, even if you’ve got to work it.

A few months back I asked my son (he is a RN) about depression and if there were any supplements I could try. I had been on anti-depressants in the past and had horrible side effects. He suggested that I start taking folic acid and vitamin B12. So I did as he suggested and although I never felt any difference after a few weeks I noticed my house was tidier. And now a few weeks further on and I feel, not happy, but OK and somewhat less anxious than before I started taking the two things. Your mileage may vary.
cheers
~ulrich

Since the news is just “the constant political bickering that has bled into every aspect of daily life [that] has become unbearable. Someone is always doing something, or saying something, that sends mobs rampaging around doing fuck knows what to whoever happens along”, I’ve stopped “keeping informed.” It’s really lowered the stress levels, and, since it’s all just garbage anyway, I’m not missing out on anything.

If “The News” ever started carrying important information again, I might be tempted to pick it back up.

Have yourself a Merry little Christmas, Jackie. :)

I think via your consistency (both in making us feel and in getting out the comic) and amazing story line you have secured yourself a faithful following. Take the time off to enjoy your family! After all, that is what this season is truly meant to be about!

And if you feel like you’ve had too much family, you can always surprise us with a single panel.

I am sure someone will complain, but this is the internet where complainers and haters come to breed and thrive… so just ignore them and do you!

It’s as @Mgeth says. Don’t worry, your readers are here to stay, Mr. Crave. :D Anyway, it’s nice to see the friendships Thomas have, how he handles these. Surprising how he calls Reggie a friend, even when Reggie’s not really in good terms with John. But there’s some loyalty in there… haha. Stay well Crave, and take your time. :)

Everyone is entitled to a vacation. If you need a break, take it, we aren’t going anywhere.

Let’s go for a theme here: title the next strip “The Battle of Midway.”