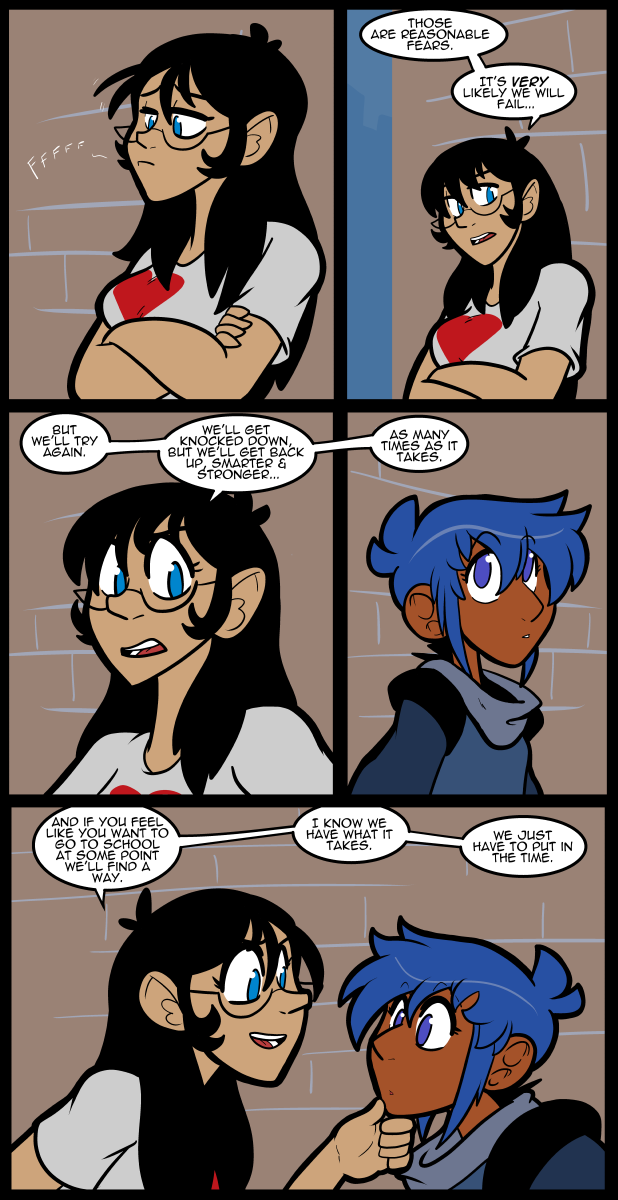 If Jo is the sum of all me psychosis then Jess is all my crazy belief in myself. She’s not fooling herself though, or trying to fool Jo into believing. To her this is all a calculated risk and all endeavors involve some risk. People who succeed are just the ones who outlast their failures. There is a junkheap of disasters strewn behind every person whose name you know because they made something of themselves. You don’t make Spider-man on your first swing. You work up to him, and even then you’ll likely spend 60 years evolving him into whatever he is to the world at large. Not everyone is built to survive the stress that consistent failure causes. I could never trade cattle, for instance. It’s too complex with too many variables to cope with, but my father thrives doing it. At the same time he couldn’t tolerate sitting, alone in a room, making imaginary people say things to each other. Everyone has their place in the world…

I could never trade cattle either. They’re necessary for my civilizations in CATAN.

Or am I thinking about sheep?

So you have wood for sheep then?

I think Jo is awesome! I never thought I’d hear “Jo” and “psychosis” juxtaposed. “Quirky” definitely but her quirks are cool!

Thank you for saying so.

Thank you for that. That’s just what my ear-worm started up on a hacked-musak, ala Steven Bierce.

And as long as it is Thanksgiving, I’m wishing you all, Health and wealth and happiness and the best fun, food, and family,… or friends.
I’m thankful for this comic and Jackie’s fine art, and the thought he puts into his characters. I’m tired of superhero characters like Harry P. I need Jo and Thomas in my life. They’re real, relatable, and I feel better any day I get to read about them. So; Thanks Jackie, you rock.

X2 Sorry I don’t say it more often. Seriously, I hope you have a happy Thanksgiving.

Damn, you beat me to it… by several months… I really need to keep up with my regular comics more often.

I cannot find whom to attribute this quote but it seems applicable.
“Don’t let the internet rush you. Nobody is posting their failures.”

Whoever said it doesn’t know shit about the internet, that’s for sure. XD

No matter how many times they fall, their success simply means that they got up one time more often than they fell.

I think the meaning of that is mostly pointed at webcomics and the terrible sense of artistic self-hatred there seems to be on the Internet.

I read forty webcomics minimum. Out of the forty, thirty-five of them have artists who HATE their own art. Absolutely loathe themselves and what they draw (or at least they claim they hate their own creations – not sure if it’s just the drama they are creating or what). Most of them have the “fuck it, I’ve drawn this ten times already, I’m done, it’s not gettting better” attitude after the comic is posted.

So the saying, “Don’t let the Internet rush you. Nobody is posting their failures,” is the comment of Randall Monroe of XKCD, meaning that web artists actually post their best when they loathe their art the most.

At least that’s what I remember reading at one point for that meme.

I was raised around the cattle business myself and worked the stockyards as a teenager. Raising cattle and trading cattle are two different but related businesses. Dad tried to pass on the trade but it’s a good thing i went off to college.

That’s what happened to me. My dad was the quintessential farmer in that he had several large fields of different crops; raised cows and pigs; and grew his own produce. His great great great grandfather started the farm, and it was passed down to each first son. I was forced to be in 4-H (I don’t really hate it now like I did then, since I learned a LOT about community and self-worth) to learn how to raise and show livestock. I realized then I have absolutely no talent or desire to raise and trade cattle. So I covertly attended college using ROTC, and then when jumped into the military as soon as I was able, abandoning the family farm.

Despite all the drama and implosion that caused in my family, I’m glad I did it. I really can’t stand farming in the slightest (all the males in my dad’s family usually die around 58, because of the stress being a farmer caused).

I get Knocked Down
https://www.youtube.com/watch?v=2H5uWRjFsGc

On twitter, Jackie is talking about the painter, Bob Ross.
I mention this only because I find it kinda amusing:

You can buy a toaster that burns Bob Ross’s face into your toast. (Bad spelling, I know).
There is a waffle maker, that does a similar BR image.

Here is a link to see the toaster:

You have frightened me out of a year’s growth!

Hee hee hee! Sorry, I should’ve put a warning on my comment! :D

I rarely post but your analogy in the blog as it pertains to today’s comic and, by extension, life was very well put. Not sure to what extent, but it made me think, and made me happy.

I’m glad it had a positive effect.

Just so you know you are well above average on the positive effect scale. On a regular basis you bring joy into my life. So thanks.
~ulrich