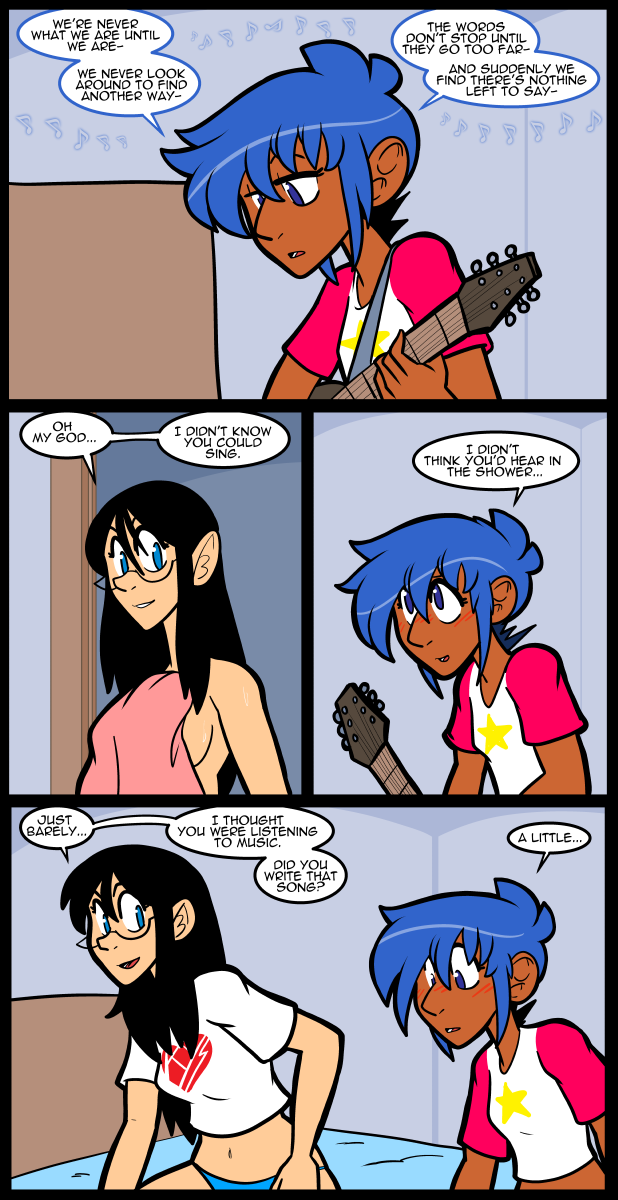 I am, by no means, a songwriter. That first panel is about as much as I could muster without taking a ridiculous amount of time. One thing I do know about songwiting, however, is that lyrics only have to SEEM meaningful. Most song lyrics don’t mean anything if you really scrutinize them. You filter them through the lens of your experiences and assign them meaning. That’s not true of every song, but a large majority of pop hits, for example, have very limited actual depth of meaning. Really though, that can be said of a lot more than just songwriting. The reverse is much worse, I think. Being beaten over the head with a message is pretty lame. I try to slide my message in under the radar, rather than just spell it out. I feel like I’ve done relatively well. I also feel like I’ve done okay at showing that there are multiple sides to any situation. Although, generally this comic isn’t a real message heavy affair.

I’m probably going to have to write that whole song eventually though, which is… daunting.

…how did she get dressed so fast?

…and more importantly, why?

They already made out earlier today. Maybe they want to do something else for a while.

Sure, but Jess has never really been shy about leaving some skin bare.
That it’s Jo”s shirt she’s wearing warrants noting, I think.

Hey, Jackie! Love the webcomic! Just wanted you to know that it’s “too” in Brooksie’s second speech bubble. Keep up the great work! :D

unless it was intentional?

There are no typos, everything the author does is carefully planned. Clearly this is some form of forshadowing. Perhaps they break up over the usage of to, too, and two.

typos are my main source of audience interaction…

Ooow! Harsh! I th Ugly we were doing better than that.
(Buzzer) oops, looks like time is up, and it looks like our team failed.
(Sigh)

But hey, kudos on getting the nuance of putting the guitar down, and that beautifully. It’s the little things in your art that raise it from a web comic to real art. I’d put any page you’ve done in the past three years against Roy Lichtenstein any day of the week. (And secretly glad you’re not vying against Dali or Seurat, that would be a rough battle)

I th Ugly = I thought
I don’t know why the evil tablet does that to me, after I have corrected it once.
Correct me once shame on me,
Correct me twice, shame on Apple.

Love your comic I check it every chance I get. Also in the last panel you “though” instead of “thought”. :P <3

Man, I wish someone had caught both typos before I fixed it the first time. XD

Some of us don’t get up that early

I amusing that there is a typo correcting the typo.

A spooky voice says: “Use the SPELL CHECKER, Luke!”

That would be the joke!

If you need a proofreader, I’ll volunteer! ^_^

How did she change clothes so far? Is she wearing the same shirt still?

Re_”I’m probably going to have to write that whole song eventually though, which is… daunting.”:

While, on the one hand it can be stressful to be racing to make a deadline, I suppose that it’s less daunting to compose without any set deadline for completion, but THAT method contains the risk of just never finishing. I’m not sure what sort of ‘compromise’ might be applied here.

On a separate note, did you have a particular melody in mind while designing Brooksie’s lyrics?

It only took me about 30 years to come up with a filk for The Bee Gees’ Tragedy. Don’t stress, it’ll come.

Second panel:
My wife when she says, “I’m ready. I just need to find my shoes.”

Fourth Panel:
Me: “Hurry up and get dressed.”
Wife: “It only takes me a minute to get dressed.”
Me: “I know that. However, it’s the time that it takes for you to start getting dressed that I’m trying to expedite.”

Jess, (in panel two), is one of the sexiest things!

How did Jess change so fast?

By the way, I love Return to Oz as well. :) I still have that movie on beta tape!

The art design was surprisingly true to the original illustrations.

The Gnome King frightened the shit out of me when I was a kid. Now that I’m older, his and all the other characters look pretty cool! :)

Well, I just sat down and binged from page 1 to here. Amazing work, so glad I found this comic. Just wish I new the update schedule so I could set reminders!

Monday, Wednesday, Friday, regular as clockwork.
I have it bookmarked, and folders are M-W-F, weekly, vote every day, Tuesday-Thursday,
Check on every month, and last; hiatus or not updating/Finished.
Every day- webcomics, meh, it’s a life.

First panel is an interesting new look for Jo. I liked the blue borders to signal singing too.

Jess sure is sexy and so is Jo.