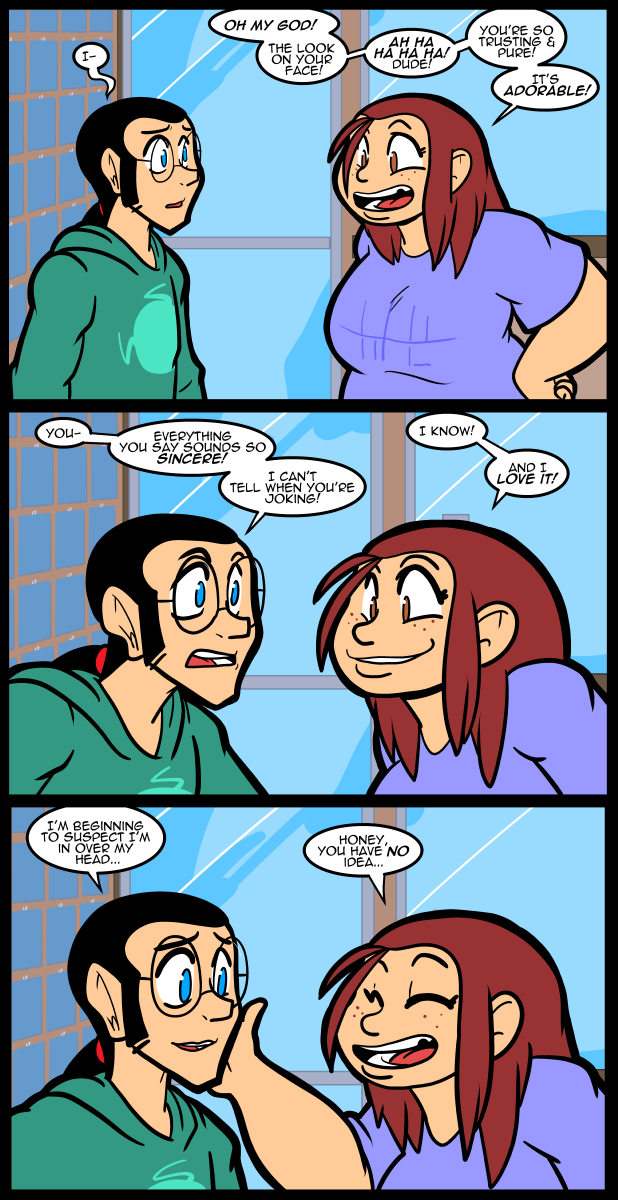 Poor Ed, he can’t quite parse out Patricia’s weird personality. It’s ironic, because she’s a tease, and a flirt, which is exactly how his sister is. Of course Jessica doesn’t flirt with her brother, so maybe he’s no used to that being part of it. Also, it might be more accurate to say that Patricia is flirty, but not flirting. She has a friendly personality that reads like direct flirting when it’s not totally her intention, or maybe if you aren’t accustomed to really forward open people.

There’s been this weird thing happening with my internet. Random pages are blocked, but we’ve been going over it on the Discord server and can’t figure out who’s causing it. It’s really weird. I noticed it was happening because I can’t read Zombie Roomie on my computer. It only shows on my phone and only if I use cellular data and not the house’s connection. There’s no reason for anyone to block the site. It’s just a comic without sex, or anything uncommon for the internet. Anyway, I’m sure your totally invested at this point so I’ll keep you posted.

There’s all kinds of fuckery going on with big tech right now. It was supposed to be “big gubmint” censoring everything but we live in an era where megacorps that make billions of dollars a year have decided they are going to be the moral guardians of the internet.

yeah, definitely Jackie’s ISP doing some shit
I really don’t get how doing this can even be considered legal >_<
but that's the US for you I guess, they have pretty much complete control over their customers because of lack of direct competition (my GF told me that an already established big fish would prevent others from settling in a given city, so yeah, that's how you get fucked over time)
hope we never get to that point in France, I like capitalism, but it becomes a meat grinder for the consumer if you overdo it

Isn’t the U.S. supposed to have anti-monopoly laws?

Sorta. There is already massive loopholes around it that get around it. Basically people in companies on are various boards of other companies. The appearance of other companies and healthy competition are alive, but there is no way someone in several companies doesn’t wind up doing things to help their best interests all around.
From Lina Khan’s work on the “Amazon’s Antitrust Paradox” she draws attention to how Amazon’s business practices have been less about turning a profit and more about expanding its influence to grow into what it is today. Amazon’s presence on the web is so strong, it’s almost impossible for small to medium sized businesses to not have to be involved with Amazon when wanting to market and sell their product. Amazon works as a hub for all these businesses to function, but also is their biggest competitor. Having access to all the sales and numbers, Amazon can see the hottest and trending products and then produce them itself, creating a “competitive” market, but really giving preference to their own products. In the sense of monopolies, Amazon is facilitating business and even enabling a more diverse market yet actually keep prices low, so the biggest winner is always Amazon.
Monopolies in the strictest sense of the definition don’t exist yet corporations like Amazon control 46% of all online sales

Ah sorry, I forgot the term I had to remind myself, the thing about people being on different boards in different companies is called “Interlocking directories”. It means means that someone that is on the board of a company like Comcast may be on a board for a health company like Aetna or even something like American Airlines and Citigroup. (Domhoff, “Interlocking Directorates in the Corporate Community”). These elite few are poised able to help legislation pass laws to give tax breaks to companies, but the perks don’t go to the common worker, it goes to them. They not only get the tax break, but they get it for each company they are a member of the board.

Except that businesses classified as “utilities” can be monopolies, and the government not only allows this, but actually protects their monopoly status. The idea is that government regulation of these monopolies will be better than “wasteful” competition. If you have any questions about how stupid that idea is, just look up the phrase “regulatory capture”. (Short version: regulators usually end up doing more to protect the monopolists than the customers they’re supposed to be protecting.)

I’m lucky enough to live somewhere with more than one viable source of broadband service. Comparing the service I get to the frequent horror stories I hear, I’m pretty sure this works better.

That’s what brought the end of net neutrality.

You’re not missing anything with ZR right now. He seems to be on a break. I hope your issue gets fixed soon!

Man, I hate when ISPs start dicking with your stuff instead of just providing access to the internet like you pay them to.

Mine’s decided a DNS lookup failure is an excuse to reroute me to their page so they can get some ad dollars. It makes typos VERY annoying.

That’s part of why I use third-party DNS services. Preference of OpenDNS, then Google DNS. (American internet providers suck. Too entrenched and somehow immune to prosecution over even the most obvious anti-trust violations.)

Yeah, I only recently noticed it. The machine I was on didn’t have the DNS settings changed.

I now strongly empathize with her.
Apparently very deadpan sarcasm runs in my family, but it’s a little extra strong with me.
The only reason I’m not a ‘pathological liar’ is because when I lie right to someone’s face, I make sure they know I wasn’t serious within about 10s.
But despite people knowing of this trait, I can manage to convince people I’m telling the truth over and over again because I’m just very good at sounding like I’m being serious about what should obviously be not-serious things.
I find it hilarious. Others tend to find it annoying. Ah well.

I get into trouble the same way. My mother always asks if I’m telling her the truth when I tell her interesting facts now because of it. My friends actually made me use a safe word so they could tell if I was fooling around or not.

With me, it’s often easy to tell. If what I’m talking about seems logical and consistent, it could very well be something I made up. If it flies in the face of all reason and sounds wildly improbable, it probably actually happened.

Sounds like you can have a potential career in politics, Tabris.

Unfortunately (or rather, very fortunately) no. I can’t keep a lie going. Or rather I theoretically could, but my urge to be honest and not keep it going is too strong.
Plus, I only ‘lie’ like this in the spirit of sarcasm. I’m way too blunt and honest about anything important. No place for that in politics.

I’m actually honest enough that i let people know I may lie to them.

Or quite possibly, that’s a lie.

If it was not for Nina right now, i would love to ship them.

For me, it’s Mike that’s the dealbreaker there. I suspect Nina would be willing to share, under the right conditions, but Patricia is Mike’s best shot at romance in this shitsville town. Not that what’s fair or leaves everyone with some kind of companion tends to have much influence on what actually happens, but such concerns can influence ships…. come to think of it, they could influence what actually happens, given Ed’s and Nina’s benevolent attitudes and friendship for Mike.

they do look like the kind of couple you could totally ship :)

That face on the second panel tho

Whose? They’re both priceless.

I don’t know if this is related to Jackie’s internet troubles, but-

I’ve recently renewed my Norton Security [the antivirus stuff]. Now NS tries to block me from seeing the webcomic, Questionable Content, because the QC site doesn’t have a web address that starts with- https.
NS does stuff like that.

Norton had fallen pretty hard reputation wise ever since they were acquired by Symantec.

The whole – oh we left our update servers open to hackers inserting crap through our updates, didn’t go over well with those who paid attention at the time.

If your ISP is blocking random sites, then you might want to look into getting a VPN or using Tor. The Tor browser bundle is very easy to install – you can just download and install the browser, open it, and go.

Both of these options make it impossible for your ISP to selectively block certain sites because they *can’t tell* which sites you are visiting. (Of course, your ISP might block traffic to and fro any given VPN provider or the Tor network – in which case these solutions won’t work.)

You might want to get your computer scanned for viruses either that your router has been hijacked. Usually big corps will play games universally. One company owns certain backbones of the net and things like that… I will say this much tho I’ve seen content creators chased off the net due to what they publish. An angry mob gets whipped up or someone tries to dox someone… that sort of thing. The media sometimes jumps in to sell a story. Of course sometimes it is a coordinated attack because a corp doesn’t like you….

Is this page’s title, a reference to Disney’s, Jungle Book [film]?

So do you get like an “This Website is blocked” message or a “This page cannot be displayed” type message?

Sorry – I’d be on the Discord to see what you’re experiencing, but ironically, Discord is Blocked at our proxy so I can’t run over there right now and see (however, I can hit a lot of other sites, including ZR).

It’s sort of like a 404 error, but not exactly. I had a picture of it but I must have deleted it.