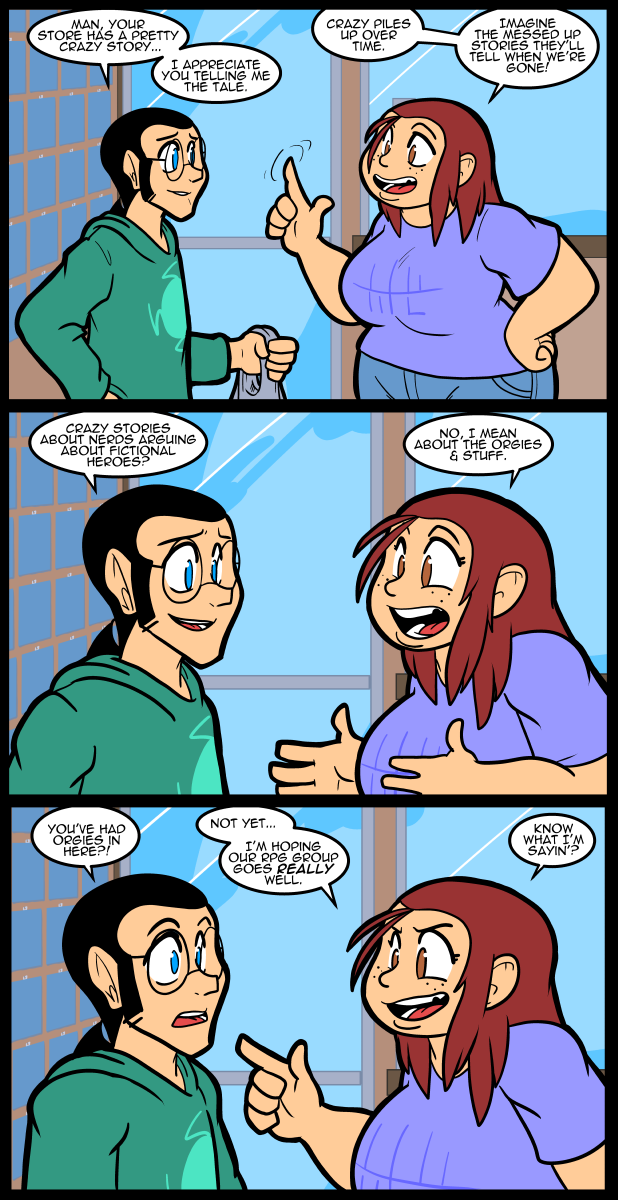 Patricia takes at least some inspiration from a few girls I knew over time. They were all into drama. By drama I mean theater, rather than drama caused between people. Of course they all seemed to like that kind of drama too. In any event each group of drama students seems to have one of these women in it. A very forceful, opinionated, person who sort of urges everyone on to make questionable life choices. Fun people, but sometimes very draining. Certainly not intentionally, but by being a font of energy they spur the less energetic to go a little further than they are comfortable with, which makes them exhausted mentally & physically. Ed is a pretty vanilla guy who is beset on all sides by people who are much more flavorful. I think, however, that he enjoys it in spite of himself. He just doesn’t expect people to be as adventurous as they are because he generally isn’t.

I finished South Park Shattered But Whole. It was fun, but I’m really not enticed by the DLC. If it had come with the extra content originally I think I would enjoy playing it as part of the main story, but as an addition I’m not really all that interested. Maybe if I had an idea of what I was getting into more than a store blurb I would be more interested, but the idea of more costumes I’m not going to use and more items I’m not going to equip isn’t enough. I also have doubts about the content matching value with the price. I’ve noticed that this is becoming more and more of a problem with DLC. It needs to be added in during the main game to make it worth the bother. Getting it after you’ve finished results in a hard limit on value. I prefer stuff like the Fire Emblem DLC that basically lets you fast grind character powers so the min game isn’t so much of a slog.

Last week was the Teen’s birthday. She lives far away now so we couldn’t do anything on the actual day, so mom and I are going to see her tomorrow. She is finishing her cosmetology courses & is going to get whatever it is you need to do that. The stress of being an adult is beginning to get to her though. I have a limited amount of advice. Mostly I just muddled through as much school as I could tolerate then allowed myself to sink into the mire of mediocrity most of us end up in. I wandered into telling stories with pictures more or less by accident, but the threat of the swamp is ever present. That’s adult life for most people. No real safety, just a little fortress strong enough to keep out the wolves for a little while. Every so often they get through and you have to run for your life. Either way they’re always there, watching the walls… Most of what we do when we aren’t working on the wall is to distract us from the howling.

Hey, I don’t know how useful it is to you to point it out, Jackie, but Ed’s speech on the second panel’s for a typo (agruing). Also, are you still taking good recent games recommendations? If so, try out Iconoclasts, it’s a nifty puzzler-platformer with cool boss fights. It’s not nearly as tough as Hollow Knight, even if you play on hard mode, and it’s got a great soundtrack and story. It’s one of the best I’ve played lately.

Ps: try to point out a typo, end up having a typo on the message. Ironic!

I appreciate people telling me when I make a typo or spelling error. It’s only annoying when they can’t do it without being smug, or snotty, or generally annoying about it. For some reason it’s really ingrained in people to correct typos in that way for some reason.

I’ve been recommended Iconoclasts before. Since I’m sitting here I should look up a video and see if it looks interesting to me.

I think it is just that the people most likely to highlight a typo are also the people who feel their mastery of all the rules makes them objectively superior(“grammar nazis”). Most of us just shrug and move on with life.

In my case, I often don’t even notice the typos. I have a fairly well-honed editing phase in my head that proofreads everything before it gets to the “conscious processing of language” stage.
…
Some would say that developing such a skill is proof I read too much.

Ed: I still can’t tell if you’re messing with me or you’re serious…

Oh, you mean we DON’T get to see Patricia/Rulette in the stock-room in her underwear? I thought there was a trend forming here…

I’m not saying one way or the other if that’s the attitude you’re going to assume.

One point does no define a trend line.

Not sure of the timing here, but how long since Ed and Nina took the puppies out to the park? I rather doubt that Rulette has his full attention… plus, there’s the dumb blonde throwing herself at Reggie, if he stands still long enough to let her take aim.

I just thought of a sales promotion, for Patricia’s store:

Sell white panties with Patricia’s logo drawn on them.
Then write this slogan on the panties:
“Patrica’s Panties!….Are you game?”

Man, that’s really awkward. Like, one second they’re joking around about the store and craziness, and the next she declares she wants to jump his and Mike’s bones at the same time. In a fairly forceful manner. Awkwaaaard…

Also happy birthday to the teen, hope everything goes well for her! :)

The end of the last part of the blog is so strikingly fucking accurate… it kinda made my head hurt. Well said Jackie, well said…

Thanks, Jackie. Now my co-workers are wondering whether to call the men in white coats, because I literally cannot stop laughing… XD

Man, nothing prepares anyone for adulting. In fact, nowadays, most of us refuse to “grow up” in the terms my father would use. From what I gather, you discarded all your childish hobbies (as my dad and his dad would point out – video games, cartoons and toys) for adult ones (watching sports, going to picnics and basically anything boring AF); you would take on a serious trade (in their case – farming, accounting or law) and you shut the fuck up and didn’t talk about your problems with others. Ever.

I thought for a while it was only my family that was broken, but after 26 years of being among the older generation, the same attitude prevails with most of them. I had an older gentleman and woman both say to me, “The Internet is the worst problem of your generation. You can tell anyone how you feel and get validated, which is just wrong.”

So people panicking about adulting shouldn’t. Our older generations have no clue what to do in the modern age, and think that suppressing emotions and being serious about everything is the only way to be an adult. My dad would tell me (and you) that having a life in computers is not a serious job and we’re all fucking stupid for doing it.

BTW, I’m 46, and the older generations didn’t even let me really participate in their world until I entered into my 20s. Another problem with “adulting” the old fashioned way – don’t take people seriously until they reach what is considered an “adult” age.

Sorry about tacking my 2 cents on here, but your comments reminded me of a conversation I overheard between two, I am assuming, grandmothers lamenting how smartphones are making kids less attentive and more anti-social. They reminded me of what I was told as a teenager about computers and before that as a child about TV. I asked my parents about this once and they heard similar statements from the older generation about radio when they were young.

Yet here we all are, trucking right along and inventing new things for some of the older generation to blame for making kids “less attentive and more anti-social”.

Personally, I’m waiting to see if there is an uptick in tinnitus cases and how it might relate to ear bud usage.

While I don’t disagree entirely, it is statistically relevant that accidents due to people using cell phones while driving have been on the rise and that sometimes you can’t even interact with others unless it’s via text messages. That last one I haven’t experienced firsthand, but I’ve heard it from some parents who have children from teenagers through their twenties. I’ve also heard about and read a couple of psychology studies indicating that the prevalence of “screen time” disrupts sleep patterns and can, in some cases, be a form of addiction (texting).

I’m not advocating that we get rid of our technology or chastise entire generations for overusing it, but it would be a good idea to find a balance in our lives between technology and face to face social interactions, because humans are social creatures by nature, and texting is not the same as hearing voice inflection or seeing all the minute visual cues that make up in person contact. Absence might make the heart grow fonder, by it doesn’t replace a handshake or a hug. :)

I liked Fractured But Whole. The ending wasn’t the greatest, but it was downright appropriate for South Park.

What. The. Literal. Fuck?

After so many pages of her fucking with him you’re suddenly shocked by her doing it again?

Lol, is it just me or is Rulette looking more wildeyed and disheveled by the panel?

Ed, you’ll need to see a chiropractor, ’cause that’s one helluva case of whiplash! XD

Another good LOL in that last panel.