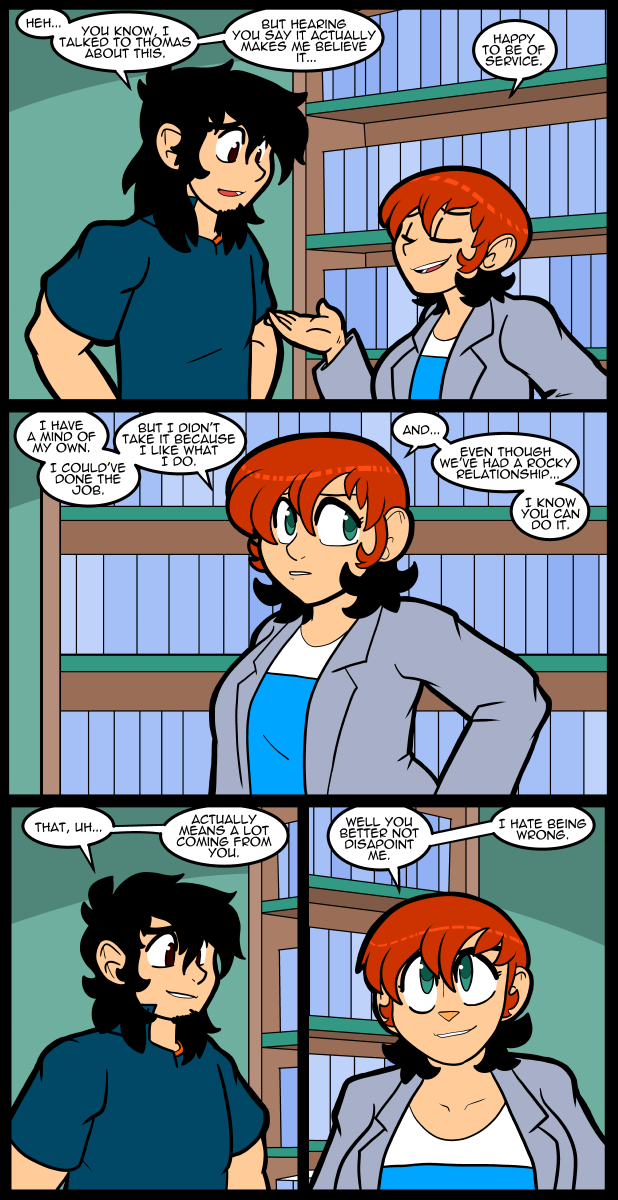 These two have grown up a little in their own ways. A little give from Carol will probably allow them to become collogues at work at least.

I’ve been feeling sick all day today, but I’m not sure why. Maybe I slept wrong, or not enough, or too much, or maybe it’s some other thing. Everything has the same symptoms, plus my body doesn’t do things the way I expect it to anymore. Like, I can’t tell when I’m sick because I need to eat something because the feeling I get when I do sometimes makes me not want to eat. It also seems like tension can cause me to feel bad without giving me any indications that it’s the culprit. Like my shoulders will be incredibly tense, but they don’t hurt, so unless I touch one & realize it’s stuck rock solid I’m not aware of it. My best guess right now is that I have a pinched nerve in my back, but I can’t get it to release, so it’s making me sick to my stomach even though I should probably eat something. Usually it happens in conjunction with a headache, but it’s starting to happen without them, which I guess is an improvement. I can at least think clearly. At least what passes for clear thinking these days. Sometimes just having dry eyes from allergies makes me feel sick. Well, it’s not dryness exactly. It’s more like there’s something in the fluid on them that needs to be washed away, but it makes them feel dry. I got some medicine for it, but sometimes it gives me a massive headache, so it’s a choice of evils. (The bottle says not to use it if that happens, so I pretty much don’t now that it seems to be the cause of the headache instead of some other thing.)

I’ve been exercising and it has helped with some of my sleep problems. I don’t usually fold myself in half along my sternum if I fall all the way to sleep anymore. It’s helped build the strength in my arms back up too. So, there’s improvement in some ways at least. My legs are kind of weak at the moment since I don’t walk as much as I used to, but if I get back in to doing that I expect they’ll adapt. My calves are stronger now that they bad leg has nearly healed. I can stand on my toes, or walk quietly on them again, which I couldn’t do very well for a very long time.

You know just a thought they could have given it to Reggie. After all he wants the power, and that would also be a good way to get him fired or is everyone playing sweet with him?

Thomas protects him because he understands Reggie’s true value.

The expression work certainly continues to improve! Great work. Snappy dialogue is what I live for.

Carol’s eyes in that last panel…!

I went to the Doctor for a monthly check-up (the Metformin I got for my diabetes may be counterfeit — thanks, Mall*Wart) and found I’ve lost ten pounds and my blood pressure is way down — even if my blood sugar is up. I guess getting back to work has its benefits on my health.

I appreciate the assistance.

Walk softly and …. scare the poop out of friends, family and coworkers who are used to Autobots patrolling the halls.

I think my spelling is better, but thank you for telling me.

So a 5 minute talk is enough for a 4 year grudge to go away? Wish it was that simple in real life

In fairness it was probably on the decline already. Being mean to John was more habit than rage by this point. It’s not like he killed her dad.

A line, written by a friend of mine:
“Come in, and see Peter’s Hometown Pizza Bistro.
All we are saying, is give Pete’s a chance.”

So I recently went back and read all the way from 1 to now, and have wondered. By all accounts we have gone maybe 4 weeks to a month and a half since the start correct?

The first 600 pages or so are two days. After that it’s not clear.

Awww. These two are playing nicely together.

I have to say, after almost making my way through your entire archive, even through some of the comments, that you’ve done quite a good job here. I will say, however, a bit of advice: if your area keeps on getting storms and Internet and other computer failures, you might want to write your posts on a text editor like Notepad or whatever you use, THEN copy-and-paste into your blog.

I appreciate the advice and thanks for reading. Please tell a billion of your friends.

Well, I’ll tell a few, for sure, but where I come from, even with your hesitancy to do anything really pornographic, a comic like this would be frowned upon for, ahem, moral reasons. Which I think is silly, but such is society nowadays.

IMO- The USA has, at least since1776, has always been confused about what morality it wants to have:

Does it want to be 1) a kind of stern, authority guy, who likes rules to be black + white…[Like Ronald Reagan, or Harry Truman], or does it want to be like 2) a sort of easy-going hippie -person, who is very flexible about stuff, as long as you’re not doing things (that put people’s lives and limbs in danger, and you’re not doing abuses to people, like- emotional abuse, verbal abuse, physical abuse, + other abuses).

For example: Most of the US people haven’t been consistent about “what horrible stuff they don’t want innocent children, or innocent anybodies”, to hear on the radio, and on TV.

The Radio censors “beeped out” the words, “ass wipe”, but left in the words, “hash pipe”,

while- the TV censors beeped out the words, “hash pipe”, but left in the words, “ass wipe”.

I think most of the US people are unsure, about what morals they want 80% or more, of the USA’s people to have.