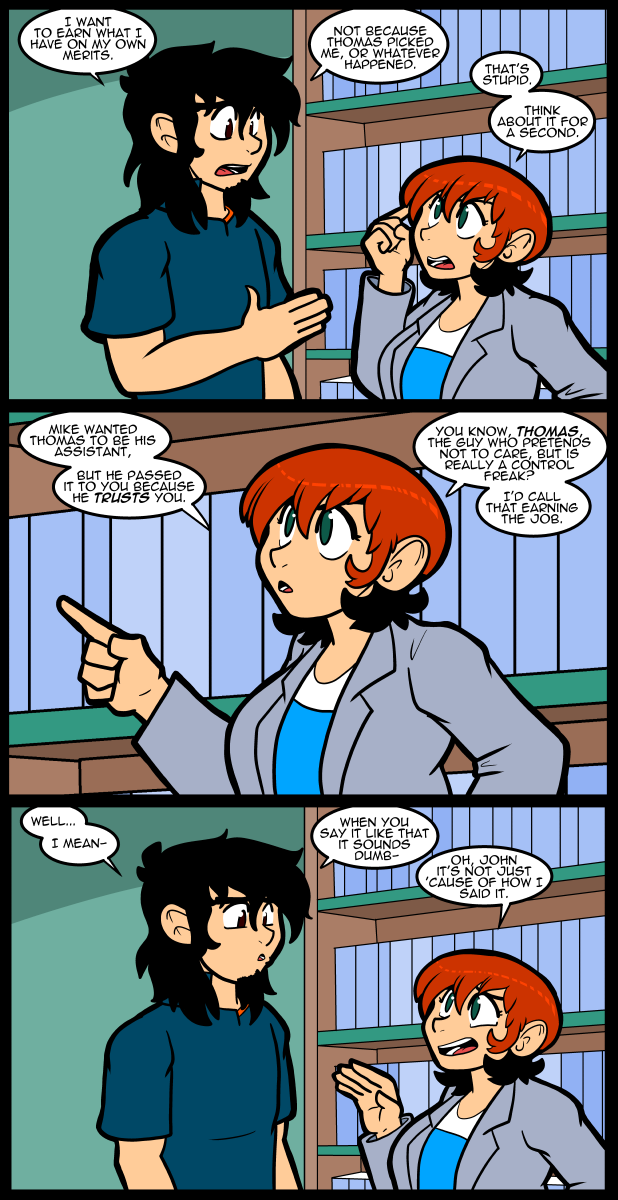 Carol and Reggie are similar in some ways, which has always been why I’ve written them as antagonistic to each other. They are arrogant, think they are smarter than other people, and kind of enjoy being mean. Which is generally caused by a lack of true confidence. Even so, I love them both. I have kind of a mean sense of humor. I don’t know why, but I do. At the same time I like John’s casual style and willingness to accept his own faults. In many ways he’s the most mature of the cast, but offsets that with being flirtatious and making bad choices in his personal life. That’s the duality of all humans. A mix of strengths and weaknesses. I think that sometimes it’s easier to love someone because of their faults than their strengths.

The Civil Rights Act Of 1866 was passed, you guessed it, in 1866. Andrew Johnson attempted to veto the bill, but congress overrode the veto. It’s an important and interesting piece of legislation if you want to look it up.

Yes Reggie and Reggie are similar. In other news Reggie is the best character.

Yeah, I wouldn’t be surprised if Reggie got more screen time over Reggie. In the mean time, I just hope for more Reggie.

I saw Carol when I typed that. I don’t know how my brain stroked out to fool me like that, but there you go.

If I had to make a choice between Reggie and Reggie, I would pick…Reggie.

Forget it, Reggie isn’t even in it. Reggie all the way.

Ok I’d love to see like a David bowie Reggie

Got to have a Bizarro World Reggie.

Maybe someone will beat me to it-
I like today’s comic, however:
One of John’s facial attributes is missing, and I think the line probably needed a period, as in: Oh, John. It’s not just ’cause of how I said it.
[Whichever].

Honestly at this point I think the goatee should just be treated like Price John’s mole from Men in Tights.

Heh. Yeah! Like the mole, or “The Koosalagoopagoop”, or something! :)

All hail the mysterious disappearing goatee !

“Hey Thomas?”
“Yes John?”
“Have you ever noticed how similar Carol’s and Reggie’s personalities are? I mean, they both (explains). So I’m just curious … When you and Carol get together … Do you ever feel like you’re … uh, like you’re banging Reggie?”
(silence)
“DAMN YOOOUUUUUU!”

So please remind me, didn’t Thomas only recommend him so he’d get fired instead of Carol? I didn’t think it was altruism at all, more putting an order to the chopping block.

Not only. By Thomas’s reckoning John has the traits to last longest AND survive best if he does get fired. He also wanted to keep Carol, Nina, & Jo safe for the varied reasons he would want to do that. Out of all the possible scenarios John is the best choice for continued success. He went over why each person was a worse choice when last he spoke to John, although he didn’t go into excruciating detail.

Ooh gotcha, thanks for the refresher. It’s true, he does seem to be the only one fit for the role, really probably the only one outside of Reggie who’d really want it too. I’ll now spend the next hour thinking about if Brooksie ran the store.

A bit off-topic, but apparently RSS is not working properly. I mean, it IS, but it only displays the last few comics. I was hoping it was possible to, say, set a parameter and possibly get the entire archive. Also, I found this error in the RSS’s source, which might explain a thing or two:

It’s been years since I set up the site so I can’t remember for sure, but the RSS is set up that way to thwart content scraping. That may be a false memory. In any case I’m not sure I can change it.

Especially if you consider some faults may be dictated by the stars. Not sure why I keep responding to these comments as there never has been a response, but I guess I like monologues.

If there’s nothing I can add to the statement there’s not much I can say.

Now that I remember, we’ve seen Thomas, Carol, Reggie and Ed’s houses, I wonder how John’s home looks like

I had one job where I was brought in as a sort of Team Leader to fire one of the teammates and assume her duties. The other teammate knew exactly why I was there; in fact she mentioned it on my first day. It took her years to trust me.

Fortunately, the marked teammate saw the handwriting on the wall and inflated a minor case of MS into a permanent disability and a full medical retirement — at the age of 38. I didn’t have to go through with the termination (although I ran across the files on my server a few weeks back). It really sucks being put into a position like that; I hope I never have to do that again.