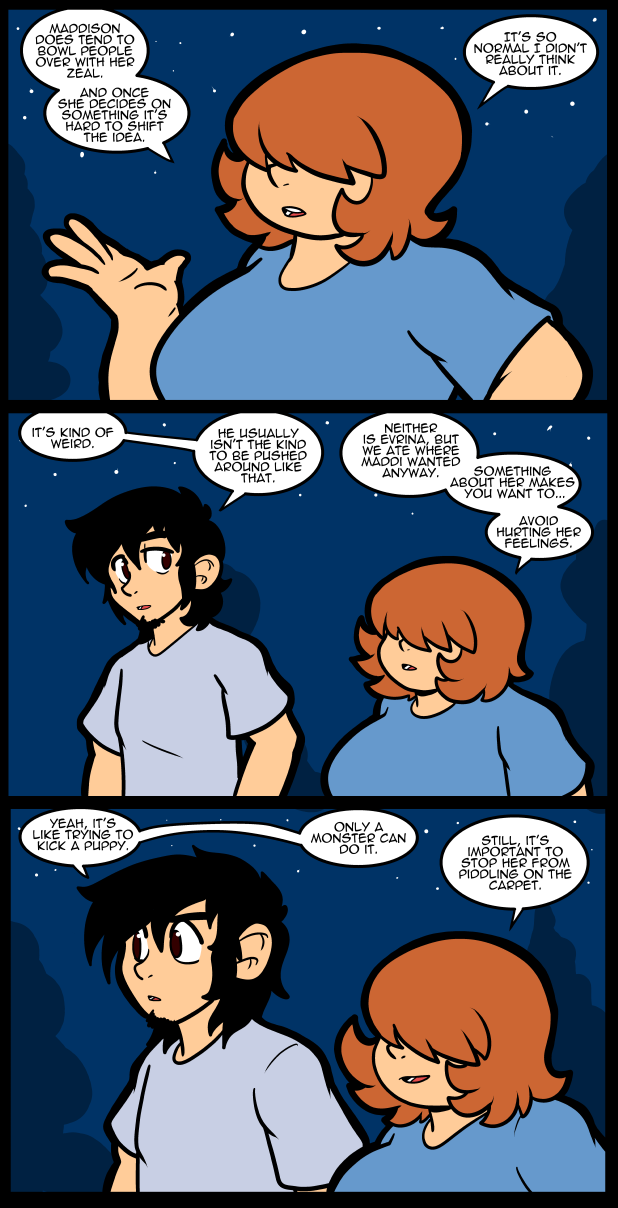 I knew this was going to be a shit week on Monday and it really doubled down as the days went on. There was the Surface issue, me feeling mysteriously ill, and my grandmother knocking pretty hard on death’s door. She’s doing better than she was, but that’s not a high bar. I mean she was living minute to minute and they put her in a coma hoping to save her. It could still go either way at this point.

It really seems like every time I just about get a handle on everything there is a series of disasters that throw everything into total chaos. I barely slept last night and what woke me up was a vivid dream about choking on an ice cube. It was so vivid that I felt like I was choking in my mind, even though I could breath as well as normal, for hours afterwards.

Anyway, I don’t feel like going on about any of this right now and I’m sure people are sick of hearing about my tribulations. So, enjoy the new page if you have it in you to do so.

I would recommend using a rolled up newspaper but where can you even get one of those anymore?

outside your front door on Sunday? most towns have a local paper, and believe it or not, most of the local ones are actually still *on* paper. I prefer to get my news this way. rather satisfying to crumple it and throw it in the fireplace when it’s depressing.

Sunday paper? That’s a thing I haven’t seen in a long time.

My local [yeah, right] community paper is supposed to arrive on a Thursday bundled with all the brochures and sales flyers for that week. It is convenient and everything is given at least a casual look over. There are still the odd flyers stuck in the door or railings or under the wipers, that always end up scattered or soggy and they always go straight into the Blue Bin. Why? Because those guys always walk through the rose bed instead of around. I’m thinking razor wire?

I don’t seriously mean this but:
Your local farm store sells electrified fences, to fence in cattle yards. [Zap!] ;D

Electric fences are too complicated. Barbed wire is much simpler, and still sends the message unambiguously.

Sure thing.
I’ll use that idea. I want to be proper about things. :D

Hi!
I’d thought I should share a thing that helped me immensely with worry and anxiety-related sleeplessness. mynoise.net is the place to listen to various sounds that sooth, help focus, sent to sleep or drown out distractions. In my opinion, it is much better than music. Hope it helps you as much as it did me, or more.

Thanks for the tip. I appreciate it.

For the record, this comic is usually the high point of my morning. Sorry you’re going through some tough things this week, but thank you for putting forth the effort to keep putting these out.

Great work as ever, Jackie!

Can I just say, tongue in cheek, that I am so glad you have not fallen into the “Sad Girl in Snow” or the sometimes whimsical, sometimes fan-art filler “dead artist day” trope.

We may not have met, yet I feel I know you better than some of the people I deal with on a regular basis in the Real World[tm], Aspergers be damned.

I am glad that you are on this earth adding your bit of sunshine+rain to the lives of your readers.

Jackie has a real work ethic. The mailman of web comics.

Person on left side: … Only a monster could do it.

Monster: Still, it’s important to stop her from piddling on the carpet.

Yeah, vivid, bad dreams are the worst.
I once had a dream, where a friend + nearly died in a river.
I wish my dreams could be written by the Felix the Cat writers, or something. :C

Sorry to hear about these events, Jackie.
I hope that things will start to turn around.

Weighted blankets are awesome for stress, and drink lots of water, even if your mind doesn’t want it.
ANYhoo, wanted to say, I love the comic. Your characters are very real to me, and while your back grounds are simple, the way you handle characters is flawless. Expressions, form, you communicate complex emotions so well visually.

The design of your characters is something I love very much, they are not ideals, or the stereotype, even if they tread on those lines, like Nina, shes the tall blonde with the nice ass, but there are these little touches, the ears, teeth, and the like, that some people regard as imperfections, but really they make her so much more real and adorable. That, layered with the real solid writing and backstory of each character is why I follow your work and support you on patreon.