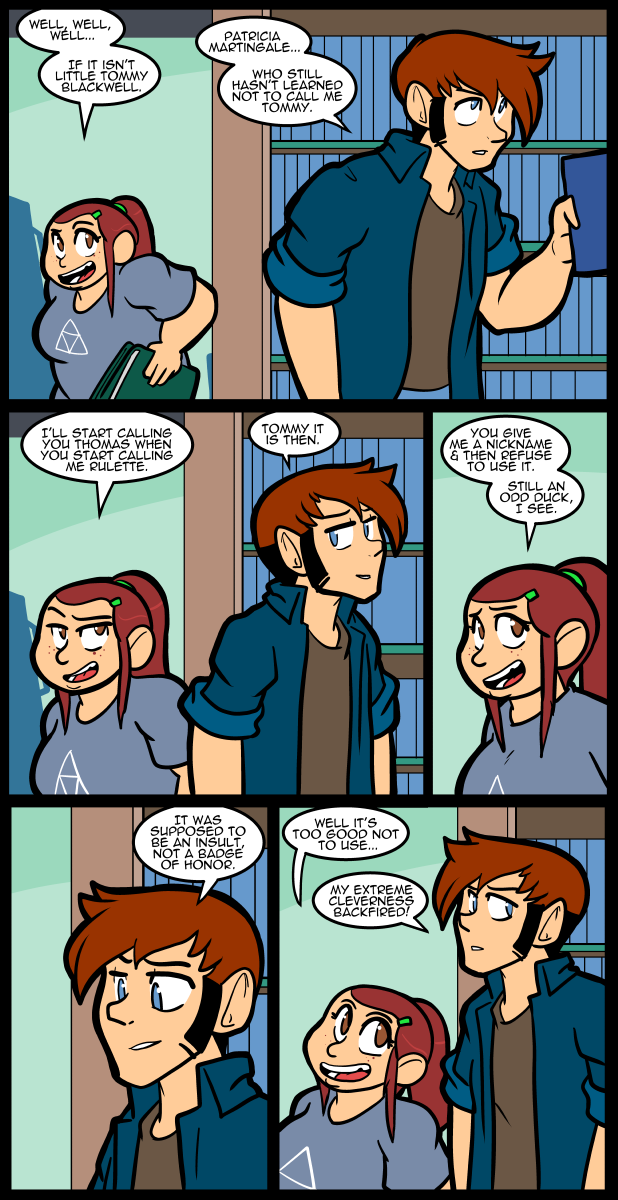 I actually debated about the backstory between these two for quite a while before deciding to pull the trigger on it. I also hadn’t given Patricia a last name until last night or at least if I had I didn’t bother to write it down, or remember it, so she got the one she has now and it’s in the comic so this time it will stick.

The other day The Teen showed me some kind of swap meet thing on her facebook because it had a listing for Lego on it. Apparently it showed her it randomly and knowing my hobbies she showed me the listing. It was mostly stuff from a few years ago. Nothing I was particularly interested in, except for a Creator set. 31012 if you want to look it up. It’s a house that is mostly windows on the front side if you build what’s on the front of the box. It also comes with a yellow light brick, which you don’t see too often. It allows you to illuminate the inside of the structure as though the lamp in the top section is an actual working lamp.

I always thought the set was neat. I really like the little Lego houses, but this one in particular reminded me of houses I’ve seen in real life. When it was available in stores I didn’t have the kind of money readily available to buy a big set like that. Even now I’d have to budget around the thing for a while. I can’t remember how much it was but I think it was in the area of $70. Even when it was on clearance that year, I’m thinking it was 2014, it was too expensive to get. It runs anywhere from $99 to $200 on ebay now mint in box.

Honestly I think you can order every piece in the set straight from Lego if you wanted to and it would likely cost around the original price. In any event the guy wanted $30 for it and was willing to haggle, but after come communication via the Teen I decided to just buy it for that much. It has already been assembled, and I was pretty sure it was going to be missing parts, but most of the thing was probably going to be intact and $30 is more than fair in my estimation.

The guy actually lives a town away so since it was going to be a face to face encounter rather than chancing mailing money to some rando I decided to just buy the set. After a typically difficult series of events to get actually money to pay this person the Teen set out to retrieve the set. It was far too hot for me to go myself. It was missing several parts, as expected, in spite of noted assurances otherwise, but most of the set was there. The missing parts were really odd ones in some cases and the set itself had been constructed in a very odd way. Certain substitutions made me wonder if the previous owner had gotten it second hand himself. In any case I had the parts in question that I actually cared to replace. The brick built animals in the set are lame as far as I’m concerned, so I didn’t bother to mess with replacing any of them.

Basically I went over the whole build and replaced the parts whoever made the substitutions for, then improved on the original builds so it better suits my tastes. Mostly small things like changing bricks to match the color of other bricks. One of the hinges comes in a light gray while the rest of the section is in dark gray, so that had to be fixed. The garage door hinges are light gray so I changed them to white to match the walls. That sort of thing. I don’t know if they hinge came in white at the time the set was built but they do now and they are pretty common. Also the dark gray hinge is in several minecraft sets. As well as some of the lock mechanisms, but I don’t have enough to fix those parts. In the original build they are yellow and red on purpose so you can see the connection points easily, but I prefer stuff like that to match the overall color scheme. I got as close as I could with what I have on hand. The garage door windows were all 1×1 clear bricks so I replaced most of them with 1×2 bricks to make it look more like actual windows. I also changed the light fixtures from yellows to either clear or trans blue where I could. I don’t like light fixtures being depicted as yellow generally so I try to swap them out for trans blue or clear whenever I can.

There are some other small things I want to change as far as mismatched colors go but I either don’t have the parts or they don’t exist at all as far as I know. I added a lot of flower stuff and little touches for the yard. a couple of minor things inside too but it’s actually a very limited space. Honestly, it’s missing a couple of rooms worth of build to be an actual functional house, but that’s a bit more effort than I care to put in to the thing at the moment. It would be cool to double the length and put in the missing rooms someday though. All it really needs is a kitchen and bathroom. I doubt seriously that I’ll ever get a chance to get this set for so little ever again but that’s basically what I would do. Just stick another set directly on to the back of the first one and alter the rooms to suit the need.

I don’t know why but this set gives me the strongest sense of deja vu I’ve had in a while. I know I’ve never built it before, but I swear it feels like I have. A lot of the Creator structures have similar parts and whatnot so maybe that’s what’s going on.

Oh, I also changed the little car around a bit so it fits in the garage better and swapped out some old style parts for the newer curved bits that exist now. I also switched the off road style wheels for street wheels because that makes more sense for the set. I also reduced the colors used down to yellow and white as much as I could. I’m short a yellow piece so there’s nothing more I can do… No, wait, I can see one in a parts bin. Well, there we go. Yellow white and light gray all the way around.

I’ll probably mess with it some more until I get it exactly how I want. I really wish Lego made more colors for the little flower studs. I want blue and white but they don’t exist. I don’t hate the options that do exist, I just also want blue and white.

They just released a fan created fishing store set that so cool. I really want one so I can make it into an abandoned version of the set, or a haunted version. I think it’s one of the high end sets just based of parts count, but I haven’t actually looked up the price. It seems like the kind of set that will be available for a long time so maybe I have a shot at it in the future.

I suspect that is going to be a memorable day for “Tommy” … mainly because neither of them will ever let him forget it!

I’d give her a spin.

But no, she was a rules lawyer, and made sure that she could use the rules against you.

Somehow- I see her as a dominant type, at a leather club.
…and if you agree to date her, then SHE makes all of the rules! :)

Hmmm … or perhaps she just emulates Galadriel, but fails her wisdom roll ;-)

You bet. I can see her acating like Galadriel. :)

Man! Your link goes to quite a video. I FORGOT how scary that film clip was! :D

Yeah, it manages to be kind of over-the-top cheesy and seriously freaky at the same time … things need to be pretty damn memorable to stick in my head at this point …

Tommy as in the green ranger?

I can relate to Thomas in this in that he seems to not want to remember or dwell on the “triumphs” of his past, since they color the perception of the present unfavorably….unless I’m interpreting this too much from a personal perspective.

And may we see a pic of the (corrected build of) the Legos? Plizzz? It sounds, and I quote a Random Neighborhood Kid, “Totally Wicked!” Thank you for your kind attention.

I’ll have to find a clear spot to take a picture. The light in most of the house is bad.

Oh man… I hope they make it for a long time. It looks so fun.

The Fishing Shack is one of the Lego Ideas sets, availability has varied. They have generally gotten better about gauging quantities but there are no guarantees.

Also you can buy most sets from Lego’s shop.lego.com sometime you can find better pricing on Amazon or otehr websites.

Aww, the yellow light bricks are rare now? I loved those things! Granted, adding LEDs to the bricks with a hollow stud on the side was also pretty cool, and I guess these days you could do decent lighting that way too. Hmm… gettin ideas now I got no lego. :)