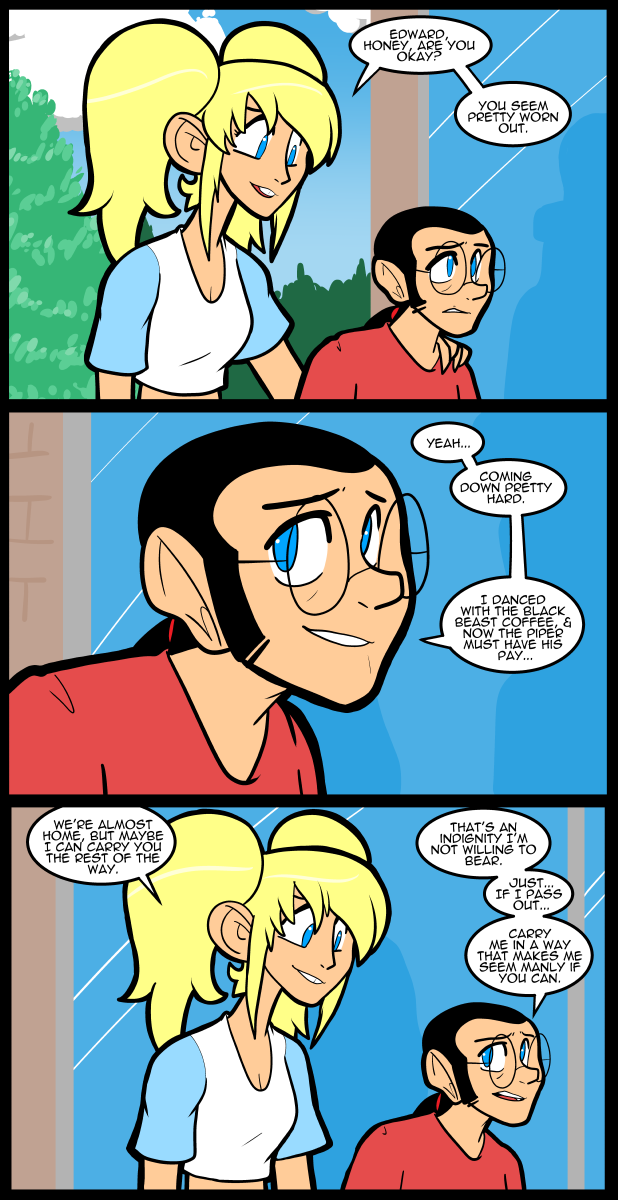 I just want to talk about something in Splatoon 2. There is a sub weapon that is a little robot bomb that follows whoever is closest to it. As far as I can tell you can’t shoot them. You have to run away. If you have a weapon that isn’t very mobile they are extremely hard to escape. I just unlocked a ranged weapon that has them and I seriously spent several matches spamming the little bastards. I wish you could throw three at a time. I’d just throw them forever and never shoot again. They aren’t even super effective, but they are SOOOOOOOO annoying. I can’t stop laughing as I fling exploding minions at people. I actually changed my armor so I could throw two at a time.

Now that the servers are segregated I keep seeing familiar usernames, which is fine, but that means people can tell what a terrible player/person I am. Since I don’t play with friends it’s all random teams, so if it’s clear that the team isn’t going to come together I lose all interest in the battle and just want the timer to run down so I can get a new group. In turf war who cares? It’s in the ranked battles where that’s a pretty dick move because you can lose rank points. I accept that aspect of my personality.

Your with a tall blonde Amazon. Quit complaining Ed.

This highlights how gender roles are weird. He carries her, and it’s fun, funny, sexy, hot. She carries him, and it’s an indignity.

I’m not complaining, just observing – I did a double-take when I realized that he had actually carried her earlier in this arc.

Yeah, the sort of juxtaposition struck me too… gender role dichotomies are weird.

This conversation would surprise me if we weren’t living in the 21st century…. The biology is different hence the roles are different. Now the 64 thousand dollar question is what is the difference in biology between being gay and straight?

“The biology is different hence the roles are different”
Not seeing the issue.
“Now the 64 thousand dollar question is what is the difference in biology between being gay and straight?”
Overthought.

Well, that, and Ed has been shown to have issues concerning his size. Which, considering its difference with Nina’s, very well may be having said issues going full blast now that he’s in a position of weakness, one that could even go worse.

A great shout out to the webcomic too.

I hate to break it to you Edward, but you’re a short man. People don’t typically look to short men and view a dignified individual. So don’t be ashamed if you end up being carried home like a sleeping princess, or dog, or child. This nation is disgustingly sizeist.

The nation pretty much cornered the market on pretty much any of the -ists except for those they consider anathema – that would be any flavor of politics that isn’t USA [5min of shouting those letters] …. uhm, is there any other?

There was a scene in The Fate of the Phoenix, by Sondra Marshak and Myrna Culbreath, wherein Captain Kirk and a female Romulan Commander ( the one from The Enterprise Incident, if you’re Trekkie enough to care) were in the turbolift after just completing a rather violent planetside adventure. Captain Kirk was pretty beat up (though he was still wearing part of his shirt) and started to collapse. She picked him up and was going to carry him back to his quarters when he insisted that she put him down. When she asked why he was being sexist, he merely pointed out that they were on his ship. Would she allow anyone to carry her through her ship if she was able to walk, or crawl?

It’s a long explanation for a pretty short point, but it’s what came to mind when I saw this situation. A guy not wanting to be carried by a gal isn’t always sexist pride. Sometimes there’s other kinds of pride involved.

I like the little stoop (what I call vulture pose) that Ed has developed as he comes down – you’ve expertly conveyed how drained he’s feeling.

Others have hinted at it, but: Come on, Dude! Ask her for a piggyback ride! :D

I’m not sure being mistaken for your girlfriend’s backpack is consistent with maintaining dignity … though I’m sure there might be “compensations” … butt chaffing might also occur … ;-)

He probably doesn’t want to be confused w/ a backpack, as you say, or [as a teddy bear] on Nina’s back.

Hm. She [could] carry him on her shoulders, like a mink stole, or fake-mink stole, + then people would just think that Ed + Nina were odd, + just walk away from them. :)

The only problem with this is I can’t see him as comfortable being neck-Ed in public.

Thank you, I couldn’t have pun it with out your set up :-)

Soticoto, I don’t know if you will eventually find this comment.
I’ve been reading yours for years now & sharing them with other readers.
Even though I know you won’t care, I’m sorry. Sorry I can’t help you.
Your sad story has been unfolding before me for so long and
I’ve seen you slowly sour more and more. I’m not going to tell you things
Will get better, we both know that’s not true. They’re going to get worse and
worse and worse until you die. Either from age, or by your own hand. I suspect
The latter because I feel like you can face that void and feel no fear or sadness
About it. You came from nothing, lived as nothing, and will return to nothing.
There’s a bravery to that I don’t possess. When you eventually stop coming back
I think I’ll know why. Again, I’m sorry I couldn’t help you on your path to
oblivion, but I hope your path to it is clear and quick. Thanks for reading even if
you did hate it all and the one who made it.