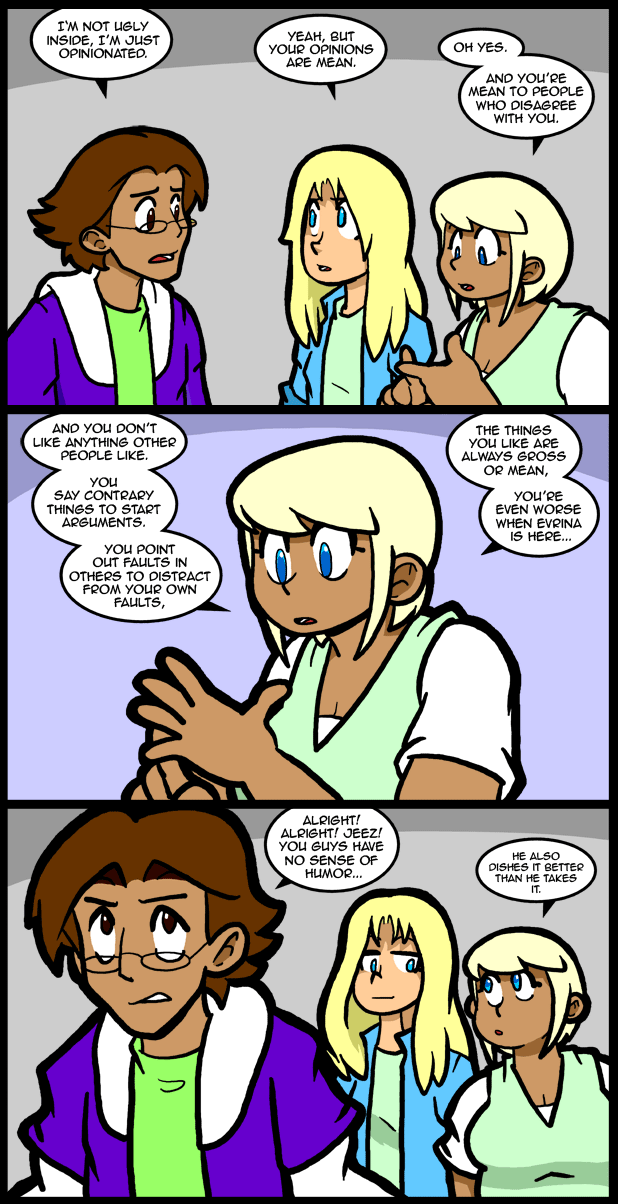 Unlike how many other characters might Maddison is not listing these faults out of malice. Hers is just a simple truth and perhaps a failure to understand how her words might affect others. Bridgette on the other hand is not without malice, but certainly not vengefulness. They are comfortable, for whatever reason, telling Neil where to get off as it were. Whether or not he deserves the treatment remains to be seen. I suspect he has earned this little scene in one way or another. Still, he obviously remains friends with these two in spite of these shortcomings, so it’s unlikely this is much more than normal friendly… drama.

Speaking of drama, I’ve been watching Downton Abbey. It’s filled with the stuff. British passive aggressiveness and dram as far as the eye can see and the ear can hear. I’ve switched from Top Gear to Downton Abbey for Teen putting to sleep times. They both have similar effects, but I haven’t seen Downton.

This Contrast game I purchased for the Teen is okay. I’m not real big on its type of puzzle solving, but I feel like it would benefit the Teen to hone her problem solving, and tactical skills. Unfortunately my role is that of crutch when things get difficult, which undercuts the benefits… Regardless the game is easily worth the $6 I got it for on sale. I almost purchased Tomb Raider for $10, but the sale ended before I had made up my mind and, essentially, made my mind up for me.

I made the mistake of wrapping a present for the Teen and placing it under the tree. The result has been subtle, and not so subtle, questions regarding said present. She won’t learn the secret of the box from me though. This holiday torture will last until the prescribed date arrives. AH AHAHHAHAHAHAHAHAHAHAHAHAHAHA!

so I was laying in Jackie’s bed because its wayyyy better than mine and he was typing and I told him I claimed it as mine forever and that he should trade places with me for a day. id be him and stay at home and draw superior comics (not) and he could go to school and improve my grades, sounds fair right? I think he could pass for me I mean clearly I’m prettier but it could work XD just kidding. I really don’t feel to awesome tonight and I wanna sleep, I’ve barely gotten any sleep lately. I have finals coming up and another week of school before my Christmas break and I cant wait to sleep in, bake all the foods, open presents, bug Jackie etc. I’ve been playing my game contrast kind of a lot and its really fun but challenging to, it makes you think a little and Jackie claims that’s good for me. as Jackie mentioned there is a gift in a big box under the tree for me that says to: the teen from: Thomas Blackwell. I find this odd…and I’m guessing the box is filled with disappointment but I am dying to know what it is!!!! it will drive me crazy until I know what it is, I have begged Jackie to tell me what “Thomas” got me but no not even a hint. so unfair. I’m currently working on an art project that I had to pick a specific artist for and draw some of there art work so I chose Jackie and will be drawing some things from his comic once I’m done if you all want to see Jackie has agreed to post it so you all can see. not gonna lie his comic characters are harder to draw than I expected and he has had to help me fix a few things but I think their pretty close to the way Jackie draws them, although I don’t believe I’m doing carol and brooksie justice. Jackie stated in an earlier point that I don’t like comics but that is untrue, they aren’t my favorite I like novels better but I really like the new dead pool comics and I have read some of Jackie’s just not all of it because sometimes it confuses me a bit but I kind of know the basics. like I said I like books way more I could read a good novel all day long if you let me and sometimes I do. I currently love the author Katie Mcgarry I believe is her name even if I did spell it wrong. she write harlequin teen novels that are so good and hit me in the feels every time. I have my own personal library in my room but sometimes I trade my books for a good comic or some video games and drawing time, these are basically my life. so if you didn’t know that you learned something new about the teen. anyways its about time for bed and Jackie has already passed out so night peeps!

I think you just wrote me into your comic, aside from the fact that Neil is (presumably) a furry. (And also that he wears glasses.)

From the shaggy brown hair with the right-parted bangs to the Purple sweater with a green tee underneath, and all the character traits you just slapped on him…

It’s scary how close he hits close to home as a character, given what Maddie and Bridgette have described him as.

I for one would be all for being written on as a guest/toss away character for a between failures strip :O can this be a thing? that would be awesome

Maybe I could make it a Patreon thing. It would make it a lot easier to do random things than trying to shoehorn people into the ongoing story.

Please speculate further on this topic. How much extra for a scene with Carol? Or Carol and Alex? Or Carol, Alex, and Brooksie? Or…….

What do you mean?

I think you know what me means ;)

I’m taking this to mean that there’s a badger in the group.

Badgers? We don’t need no stinkin’ Badgers!!! [tosses badger out the window]

The “Treasure of the Sierra Madre” film will never die. [Hee, hee.]

It is the Acne of pop culture.

Well Teen, know that you are not the only one curious about what could possibly be in a box labelled as “from Thomas”. Any other comic personality would be less intriguing but that Thomas is is a peculiar one.

I totally didnt re-read and catch up on the entire comic in one night. By the way holyshitdaylighthurts

Teen: I remember trying to draw Charlie Brown and Snoopy when I was a teen. Just because it’s simple doesn’t mean it’s easy!

But then, I still can’t draw for squat. You likely have more talent. Bet you do great on the project. :)

Niel you poor fool. You’ve had three pages so far to convince us you’re not a tool and you are failing. Reggie’s an ass, but he has charisma. You haven’t even proven yourself. Do something incredible or get lost!

Go back and check the comments for Reggie’s scenes to date.

It took a long time for people to stop baying for his blood for being mean to people their waifus liked.

It took longer for them to stop effectively saying “even if he cured cancer, it still wouldn’t redeem him!”

Didn’t know that, but then again I didn’t disvover the comic till around the dart gun war arc where Reggie was kind of on full display. Still Niel could at least man up a little. Their shooting bullets and he’s just taking them like Tony Montana.

Oh, snap! Do I see a bromance coming up between Neil and Reggie?

If they don’t rip each other apart first. ;-)

…and yes, I DO remember when Lucy listed [the first of] Charlie Brown’s faults. Been collecting Peanuts books since 1964.

Now I can hardly wait to meet Evrina. Sounds like her fursona will be a vampire bat, or something.

Thanks for all the content. You too The Teen.

Are you Mad, son?
I will never Neil!
Not even before your comical greatness.