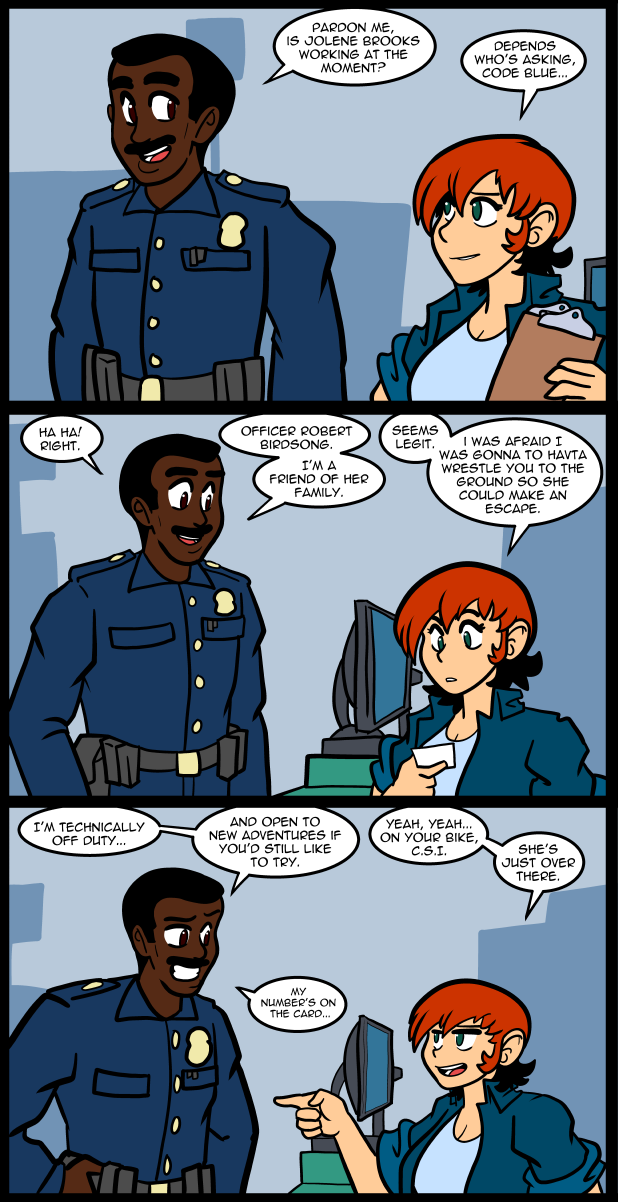 This character has existed on paper since the beginning, but IO never introduced him because cop uniforms are so fucking hard to draw. They have a million little things on their uniform. I also named him in two seconds after never actually bothering to think of a name. His surname comes from another comic artist I like. Here is his old comic page. He started out with a shaved head and no mustache and slowly I kept adding things because I didn’t like how he looked without. Now he looks a little 70s to my eyes.

Here’s a Halloween image of Nina. Enjoy it.

Hmm… has it come up before that her parents are divorced?

It shouldn’t have, since they aren’t.

Judging from carol’s upbringing, I wouldn’t put it past her to be able to wrassle an uncouth cop. That’d be interesting to see.

There are far worse things that could happen to one than being grappled by a pretty, voluptuous redhead.

As Thomas discovered a while back here!

I insist that you get off of me immediately!..within the next two and a half hours, or when I stop breathing.

Bad news for Brooksie? Cops and fireman always bear bad news when they seek you out. And I know this because I’m a fireman.

Eh, he looks a bit too happy (and willing to hit on Carol) to be the bearer of bad news.

You know I thought that at first but then I remembered the positive demeanor Cheif Larr had when he and I went to tell a family member that their husband was in the hospital with a burned and broken arm.

Don’t trust the smile folks, it’s there to ease the blow.

I’ve always had a thing for Carol (reminds me so strongly of my ex-wife I guess), But I could seriously have a thing with Nina!

Or if I could become a cartoon. I could go either way on this.

Hi Jackie. If you don’t like drawing cops’ uniforms, in future scenes with Birdsong: you can do the Lethal Weapon thing- and draw him in street clothes, with his badge on a neck chain.

Or just the badge-on-belt most inspectors or other specialists wear.

Well, at least he doesn’t have two weeks to go until retirement.

Ya think?!?! I could never do that. Around someone attractive, my mouth dries up and my lips stick together. And I lose about 45 IQ points. And brother, there ain’t a lot to spare.

Meh i just dont bother cause im a fuggly chud

Once had an OCC guy tell me that he guessed that something was technically within regs, to which I replied, ” Good, Id hate to have to hit you over the head with a shovel, bury you in the river, and dump your truck on the Mexican border.” He felt that I’d put a disturbing amount of thought into this option.

Why would he think that about Standard Plan A?

I love this guy

He bought a hooker for a Horse?

I find this person affable!