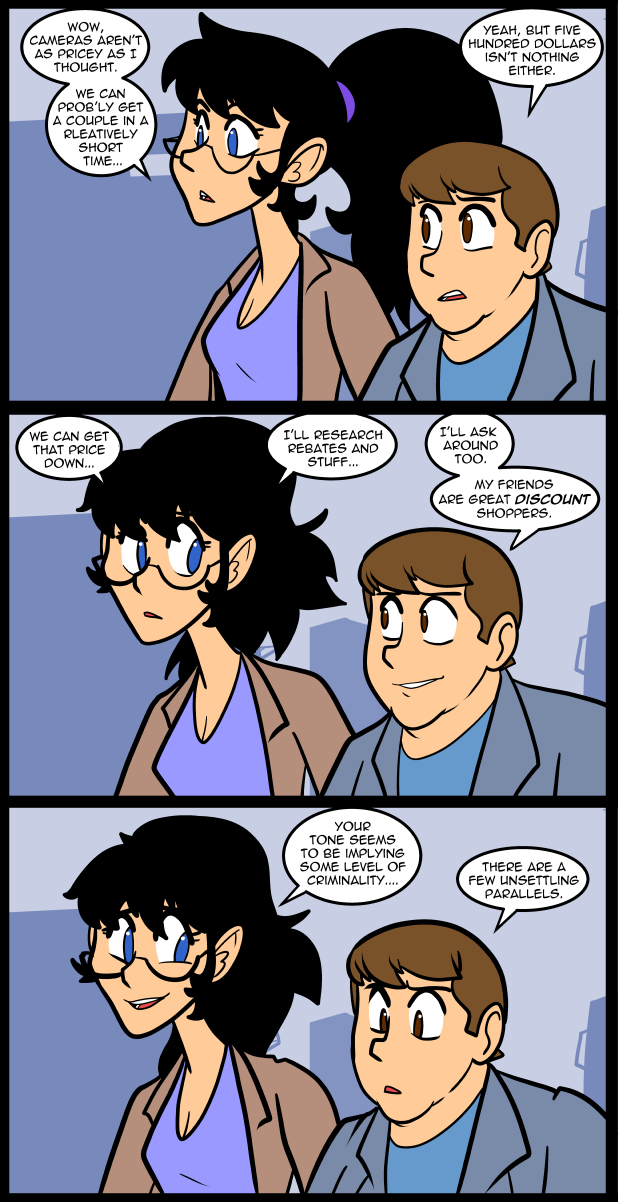 In case you’ve already forgotten what these two are up to.

Back when my friends and I were harboring dreams of being filmmakers camera equipment was insanely expensive. We were slightly to early for the revolution that brought really cost effective consumer cameras. There was never enough memory, or tape, or cords. Or there was no standardization for video compression, or any number of things we could never get over. We also hadn’t all learned that production of content is more important than quality. So we were held back by fears of being terrible. We were, but that doesn’t matter as much as you think it does in reality. In fact, people love terrible things all the time. Jolene even said as much once… Doing something in spite of not being good at it has worked out for me. At least more so than doing nothing would surely have.
People spend hours and hours watching people play video games. Spectating is a big part of life and some people would rather watch a feed of minecraft than football. Nobody knew that was something people would watch, but someone did it and here we are. I watch the daily vlog of a guy called Adam The Woo. All he does is wander around and explore the world at large. In a van. Somehow the combination of his personality and choice of subject matter resonates with me. I don’t like travel shows about fancy places like they put on TV, but I watch this weirdo tool around the US. If you visit his channel and like it tell him I sent you.
Anyway, you never know what people will like. If you have the means to try an idea give it a shot. You might get lucky and find a new thing to do with your life.

I got a guest comic the other day that was so funny I almost ran it today because it was a scene break. I guess I’m going to keep it in the chamber in case of emergency, but if any of you know someone, or are someone, looking for a little exposure for your comic I’ll always accept guest submissions. If I get enough I might run a week of them so I can maybe build my buffer back up and get a little rest.

She turned her head.

her fashion is so unparalleled, it can BREAK THE SPACE TIME CONTINUUM.

Buuuuut Jackie doesn’t want us to know that, so yeah, the official story is she turned her head.

Awesome. Now I’m going to have to go in and edit this because you got in my fucking head…

I think they are just saying you need to work on your consistency.

Actually I was just being silly- I understood from the get go that she had just turned her head, but oh well can’t go back now I suppose

Yeah that wibbly wobbly timey wimey stuff can get kinda messy very quickly/slowly. Its all relative anyways though.

Why don’t they just use their smartphones? I got a refurbished IPhone 4 for $100 and the pictures/video it takes is great.

No they are not. You can compare the quality of the video from a smartphone and from a real camera. The objectives and sensor are so different that you can’t compare

If you are producing content for the web, a recent generation smartphone usually is good enough. With all the compression and artifacting introduced by content hosting sites like youtube the superior quality of a dedicated camera will be all but lost to the majority of viewers.

I don’t know. There’s just something about a making high-quality Master Print that seems to affect everything else. If nothing else, you take the project more seriously and tend to produce higher-quality content. Plus, when it’s time to post it to a higher-quality venue (i.e., the DVD/Blu-ray) you don’t have to re-shoot it in order to maintain your self-respect.

BF finish the month 103rd on TopWebComics and 10th in the Real-Life category
So close from TOP100 yet so far. 26 votes away from 100th

How can we not be in the top 100? I vote every day. Religiously! Even when we’re fighting. What’s with the rest of you guys?

Who the frell is the big guy?

Jess’ and Ed’s neighbor a few doors down. His name escapes me, but he’s helping Jess and Brooksie with their video project.

But I know it’s not D’Argo or Creighton.

A “rleatively” short amount of time? ‘:3
Your fans are your best spellcheckers.

I wonder if GoPro Hero-type cameras would work in ths application. You can pick up older models (5 is current) st00pid cheap on, uh, that auction site.

“Who the frell is the big guy?”

You don’t want to blow $1,000 on camera equipment for a project that might fail spectacularly. Drop $200 on your initial investment. Once that pays for itself, you can start upgrading.

They could use a second-hand reflex camera. That´s good enough for video purposes in the web. 160$ or so. That and a tripod, maybe.

Right-a-roonie, and you can get used super-zooms for even less. I was also thinking about ¢heap dash cams, but the view is so wide-angle, it might be pretty weird. Don’t video anyone’s face with one of these…

Relatively in panel 1 is misspelled