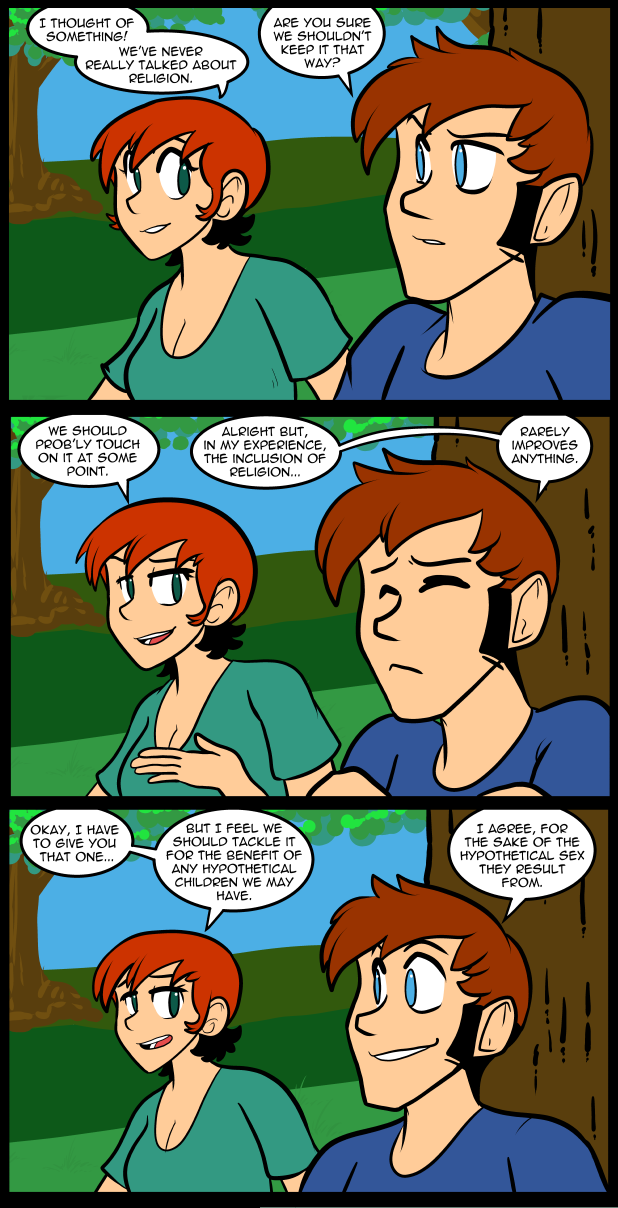 Unless you start out at Christian mingle I guess every couple has to go through this talk. Even then I expect there are differences of opinion about how to indoctrinate your potential kids. Putting it off is a bad idea, in my opinion. This is the kind of thing you should get to early on if you intend to get serious with someone. Finding out your sky gods don’t mesh is a real problem late in the game. I’ve run into trouble with religion in relationships before. Its a pretty good indicator of how things will go overall. I think it takes a special kind of pair to make interfaith relationships work. Or maybe just two people who were raised in two religions and then never gave them a thought after they were old enough to stop paying attention…

Today was a hard day. After I took my noon pill I kept almost fainting over and over. I had felt bad yesterday in the evening after I took the second half of my other pill, but wasn’t feeling faint, just not right. Eventually it passed and I was able to sketch Tuesdays page. I had just started preparing to finish it today when the incident occurred. I spent almost the entire day in bed. These incidents are very traumatizing because the fear exacerbates the experience. I was just walking down the hall and my arms suddenly went ice cold, my legs started giving out, and the lights started getting very bright. My doctor told me that the chances of these things being fatal are low, but in the moment it’s very hard to give in and let your body do whatever it wants. In theory as long as I go down without hurting myself I’ll just pass out and wake up in about 30 seconds. It’s not a theory I’m comfortable testing when I’m alone in the house and no one will find me for hours if I don’t restart right away. Dying like that would be bad enough, but somehow surviving with brain damage, like the Teen’s mother, would be an endless hell for someone whose only value in the world comes from his mind.

Anyway, I’m basically fine now. The damage from these things is more from my panic than the actual experience, or so I’m told. I’m not really sure the fainting itself can be absolved since the fear response wouldn’t happen nessecarily without it. At this point what we think is happening is the one pill is just slightly too much and the addition of the other makes my blood pressure drop too low. The fainting is my body trying to regulate that drop. It’s basically exactly the same thing that happened in the doctors office both times except it isn’t because of the damaged blood vessels in my leg now, at least not totally since some of them are healed.

That’s how i spent my day though. Now, of course, I feel nervous and unhappy, and my body feels shaky. It usually takes a couple of days to get over it all. I’ll just distract myself as best I can until then. To eight I’ll try and finish Tuesdays page, tomorrow I’ll see if I can do Fridays all at once. That would leave me with most of the week to get the next weeks pages done. Still behind, but not catastrophically.

I have found that my nasal pillows would work better if the were angled differently. Ive been trying to devise a way to squeeze them such that the airflow would always be at this optimum angle. So far I have failed. They make ones that just go over your nose, but my nose, like the rest of my head, is probably shaped incorrectly for one. I’d really like a selection of masks to try out, which is what I should have been presented with on day one. The lack of preparation on the part of the representatives is just another indicator of how little the health of others seems to concern them. I was presented with a large mask, which didn’t seal on my face even when bolted on as tight as it would go, but that was all she had on her… what a joke. I was still way too sick to put up a fight at the time. All my energy was being directed to not falling over. It was ridiculous to think I could get proper service in that state. But whatever, that’s the way it was and I have to deal with the reality that I chose a bad company. Until I can change that I have to play in their circus.

Ahh, religion it can be either a lubricant or an abrasive depending on how it’s applied.

now if only it could be harnessed in an engine instead of WD-40 :P

Politics would be another touchy subject.

With one exception, I’ve never really had any problem with a clash of religious beliefs in a relationship. But I respected her wishes in every way but actually following them.
But I will say that when the relationship was over, it was really hard not to laugh at my ex’s bizarre combination of Wiccan, Greco-Roman, and semi-Catholic views.

She literally put those three faiths into a blender and practiced whatever came out.

I pray I never date someone quite so….Eccentric again.

Not to put her down, but with those 3 sets of views, she must have been interesting to talk to.

Interesting?
Yes.
Sane?
Questionable.
In all honesty, she’s actually really dangerous when she’s off her meds.

I always kinda pictured Tomas as a pastafarian for some reason

That would be a short talk. In fact, it would never happen. Having a religion of any kind is #3 on my no-date list, right after #2, being insane, and #1, having a penis.

Not entirely fair. You can’t really avoid the brainwashing you get as a child in that area. It’s simply too all-pervasive.

I do agree with you that people that still actively rely on religion past puberty are a no-no to date, or quite often even to associate with voluntarily. It shows their anti-bullshit circuitry hasn’t developed properly, or at all.
If they don’t fall in your #2 category outright.

What is unfair about that? It is nothing but the bare minimum to expect a potential partner to have learned to question the stories they were told as children. What works for Santa works for deities too.

I must say that I saw through the bullshit pretty early (i was a smart kid and had a room with a good view on the abyss of faith), but I won’t hold it against someone if they did later on as long as they did at some point in their life. Anyway, that has no relevance to my post above, since I was talking about dating aspects. Not sure why you are bringing up prepubescent religion in reply to that. Dates are for adults.

I’ve been fortunate, in my relationships I’ve been with a fellow agnostic, a wiccan, and a non-devout muslim. so this conversation went smooth as buddah (no I didn’t misspell, i’m using the phonetic).

buddah = butter, and not buddah = [ Buddha, the religious figure/religious person].

Curses, my attempt to anger dislexic Buddhists with horrible spelling has been foiled.

Lol, Just kidding, yeah I meant it as in butter honestly didn’t even think about how the h at the end would look.

From the mental and emotional trauma you’re going through, it sounds to me like getting some religion would help.

But then again, having a Higher Power to rely on might also diminish your drive to produce and succeed.

In my experience, the inclusion of religion… rarely improves anything.

Words to live by, Thomas.

Yes, I’ve definitely had one relationship go sour over religion. I’m a closet atheist, but that pisses people off, so I always say I’m an agnostic. Well, that pissed her off! She was a lapsed Catholic turned born-again Evangelical, and let me tell you, Evangelicals will lead the next Inquisition. They are one intolerant bunch of so-and-sos. I got up and walked out for good when she started the, “Your Mother must have been pretty bad” routine. Hey, my Mom was a born-again Methodist and she never got up in my face like that.

Unfortunately, human beings are deeply religious creatures (as evidenced by the fact that this conversation even EXISTS, let alone persists.) You can’t prove that God exists any more than you can prove He doesn’t. Yet listening to Agnostics and Atheists talk about their beliefs, you can tell that they hold their “faith” as closely as any Baptist.

And substituting volume for coherency is never a good idea. It only shows that you’re insecure in your position. Ad Hominem attacks (calling people names) are even worse: they show that your position has no support at all!

In my experience, the two primary problems with religion are people that merely inherit itheirs instead of actually learning it, and those who seek to manipulate others by twisting the words of a religion’s holy book to their own goals.

The former group tends to be manipulated by the latter quite often.

This should be interesting

Does Christian Mingle do any sort of classifying? Catholics vs. Protestants? Hard shell vs. soft shell Baptists? (Yes that’s a real thing, at least in informal terms.)

I don’t actually know much about Christian mingle. I assume they must have some sort of process but couldn’t tell you for sure.

For what it’s worth: Rather than the iron-hand-rule, stern religions and/or branches of those religions, I like the ones that say things like: I offer you ways/philosophies of peace. Please follow my philisophies to help you + other people. *shrugs*

Hi Jackie,
I told my Mom the joke from “Icing on the Cake”. She loved it!

OK, I didn’t tell her the “icing on my muffin top” part of the joke. I didn’t tell her that part because- she can be kind of a traditional American-type…so, I thought it would be kinda brainless, of me, to spring a [body fluid]-themed joke, on my Mom. Anyway, she really likes that joke.
:D

Is farting a religion?

Only if you do it religiously.

Actually, my fiancé and I are an interfaith couple, and we’re barely functioning as people, so really it doesn’t take a particularly special pair. It just takes her knowing how to tune me out when I start ranting about saints and stuff.

Two people of different christian persuasions could easily have a harder time of it, not easier.