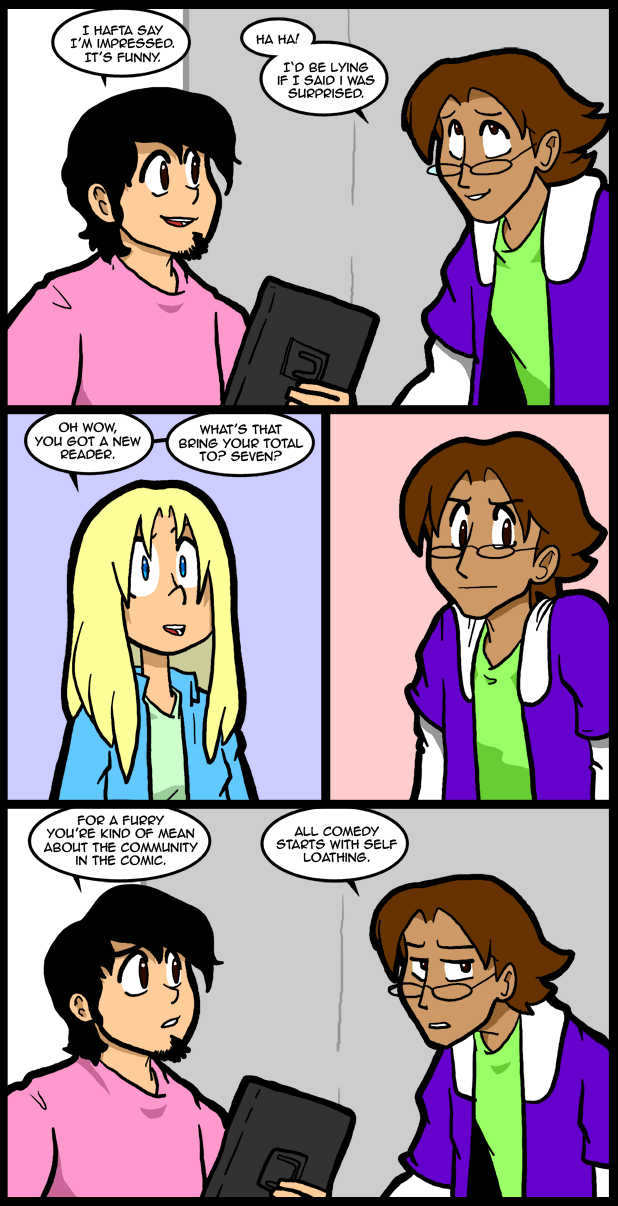 I always suspected that Minecraft would be a perfect game for me, which is why I never played it. I could tell I would get obsessed. Which is exactly what has happened. To my credit I have only played during my predetermined game times, but if I were a lesser being I would just play it till I couldn’t anymore. Eight or nine years ago this game would have ruined my life.

I made a test world to get the hang of things, and that went alright. I got a lot of iron and had armor and stuff. I even killed the first enderman I ever attacked. Unfortunately I got lost in a cave and died of starvation. That taught me the value of clearly marked tunnels. Luckily I didn’t save and managed to get out on my second try.

I built a tower to the sky at my first spawn point. It’s tall enough that you can see it from almost anyplace on the map. At least as far as I know. I’ve only been to the edges where the sea starts, or places where the landscape changes.

I have thought about jumping from it a few times. Just to see what it’s like.

Anyway, I made a second world to take knowledge from the first one into. I started by building my new home on top of a mountain like a hobbit. then I cut down all the trees that obscure the view of my land. Then I stood atop my castle and laughed! I don’t know how to raise animals, so I have a pig that wandered into my fencing. I had others but one day they were just gone. So clearly I am not good at farming.

I’ve only looked up a very tiny bit of stuff online because muddling through has been fun. I’m about to look up stuff about animals though because that isn’t working.

hello interweb peoples have you missed me? you probably expect me to have a lot to say because I’ve been so busy but I got nothing lol I went to therapy the other day which was fine. my friends have kind of been jerks lately. I’ve been sick and I haven’t been sleeping worth crap. I have make up work to do because I missed 2 days of school. which sucks but ill make it. I’ve barely left my bed lately but today I managed to eat and not throw up so threes a plus. Jackie has been half decent he bought me sprite and 7 up which made me happy and he been helping me study for upcoming tests well kind of. we aren’t very productive together and I don’t have the energy to do much because I just want to sleep and watch 90210 which is pretty entertaining really. its packed full of drama and no one has died yet. I go back to school tomorrow which I’m honestly looking forward to hopefully it’ll improve my mood a little. I’m not going to lie I feel really depressed lately land I have just been wallowing but I’m done with that. I have to read all quiet on the western front for world history and I am not loving it its very boring to me and the sucky part is ill be tested on the reading material weekly. oh joy…im hoping for a great day tomorrow wish me luck peace out peeps.

Hey Jackie. Glad to see you hopped on the Minecraft train, if a little late to the party.

I’d recommend beating the game in SP, then looking in to joining a server or setting a local one up for you and/or friends to play on/build a world together in. The possibilities available to you when you have a full team of players going are endless, and the shenanigans you can get up to are likewise just as endless and always a blast.

How does one “beat” Minecraft in single player mode? Isn’t it just an open-ended world, or is there some sort of ending that one can work towards?

Well, I suppose learning to ‘git gud’ and/or using up all the land on the map could count. At least for Jackie, since learning how to be good at the game is what he needs at the moment.

Not that learning your stuff will stop you from eventually dying or anything like that.

Self Loathing makes me funny for the first few seconds or minutes but then I drive everyone away. Well, those that can get away. The rest just have to stand there and die a little inside as I go on…

I hear Everquest Landmark is like Minecraft but its made with these new voxel thingies so its like pretty and stuff. (from the screen shots I’ve seen Minecraft is not much with the pretty… ) And they sometimes have these contests where you make stuff of a certain theme or whatever they ask for and if they like it maybe it will get into the parent game Everquest Next. (Everquest Landmark was kind of an accidental by product of the cool voxel tools being used to make Everquest Next)

Good to see you coming round in more ways than one The Teen. Heaven knows it sounds like you and Jackie have been having the fun times lately. Internet will be your pretend friends till the ones of matter that matters also come around. :)

I managed to get into the landmark once, but it was on a limited time thing. in order to continue, they wanted me to purchase stuff. But thing is, while I was playing, they had tons of server troubles and it was barely playable. Very intense on pc requirements as well. But it’s not the only game out there with voxels anymore. Another game called “Planet Explorers” uses voxels in the same way and has come along pretty nicely. Can use voxels to make weapons and items, even vehicles. It’s still an “early access” title in steam, but it’s fun.

Huh, that both is and isn’t surprising I guess. Since they kind of made it up on the fly out of the tools for making their main game which STILL isn’t out yet I kind of expected lots of troubles but then seemed like people were playing it and enjoying it so I thought they must have dodged the bullet. I could see a lot of people sticking with it for the chance to see their designs in a big MMO some day. (not saying the main game will for sure be awesome but it might be who knows? *shrugs* ) They also keep adding new features (like pvp) to this game they pulled out of their arses so if they ever reach a stable idea of what this game is supposed to be maybe they will work out the bugs some day. lol

Hi folks. I am not a minecrafter myself but my 6 year old grandson Gavin is a minecraft master. He has how to videos on youtube showing his skills. I have learned enough from him I could probably play the game myself except that I am more of a FPS kinda grand dad.

Love the comic I have read the entirety several times now. Brilliant.

Teen: May luck and peace be yours.
~ulrich

Just remember, when the test subject is All Quiet on the Western Front, the answer is usually some variation of “the futility of war” or “war destroys all of its participants, even the survivors”. What was the overall theme? What did Paul learn? etc.

Same as with Red Badge of Courage, really. Good luck on the exam!

Another possible answer to such essay questions is frequently man’s indifference to the plight of his fellow man – unless the story explicitly runs counter to that, but often even then, it’s usually as an exception to highlight that such indifference is the norm. (The ending to The Grapes of Wrath could be used as an example of this – don’t worry, Teen, we’re not going to test you on this!)

I started out as a lit major in college many moons ago before returning to college as a science student. So the gentle art of pulling stuff out of one’s butt in response to essay questions is something known to me – and, surprisingly maybe, gets more use than you might think in day to day life post-school.

I remember that back when I was in high school (and dinosaurs roamed the earth) I took the AP English exam. We had to do an analysis of some poem. I had NO IDEA what the poem was supposed to mean so I proceeded to take some vague idea and look for anything in the poem I could find to support my weird idea. I got a 5 on the exam (for those who don’t know, at that time the highest score they reported back to you was a 5). Now maybe I did so well on the rest of the exam that it offset my total lack of understanding, but based on other experiences I’m inclined to think that much of the time what counts most is not “being right” but rather being able to passionately and convincingly support a point of view. Lawyers do it all the time even when their clients are absolutely guilty. If it’s an essay just pull out all the stops and find every shred of evidence to support your views.

I am sure Crave does not want the Teen to become a lawyer.
Jurisprudence, and not having a soul, do not help much in a zombie apocalypse.

How can we blame Neil for his self-loathing? To know him is to loathe him.

I learned a useful trick when I was in High School (in a building they replaced 30 years ago and tore down 10 years ago!). The class was American Literature Since 1900 and I was doing badly. One day I noticed that the teacher kept harping on the same phrase while discussing every book. She was repeating the phrase “The American Dream” and discussing how the characters in the book either lived or missed the American Dream. Bingo. For every book report after that, I just wrote B.S. about “The American Dream,” giving a brief summary of the plot with a few details about whether the characters achieved the dream or lost out. I aced the course. The trick worked with English and History classes through College, even Art Appreciation. I went from a C average to a B+. Each class will probably have different key words, but listen and you’ll figure them out. See if the trick will work for you. Just listen for the phrases that the teacher whacks again and again and put them into your reports and essays. Just don’t overdo it and you’ll probably do better.