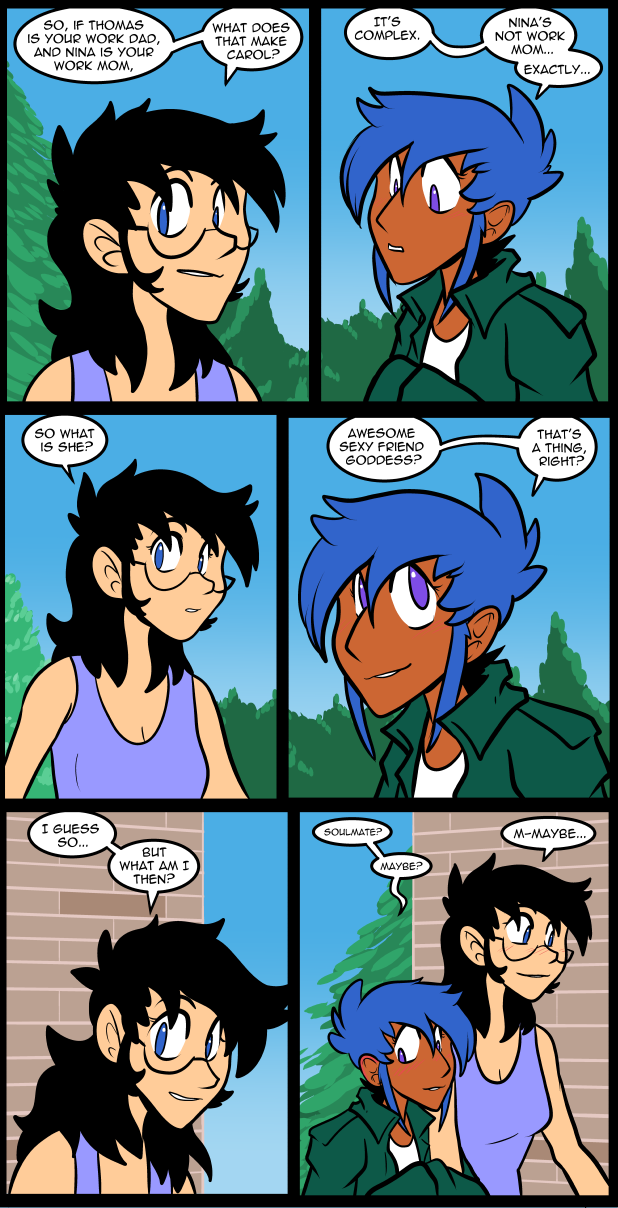 Oh shit, these two are getting all lovey too.

There was a sale on the first 3 One Punch Man collections, so I decided to get them. The first two were good, I assume the third will be too. It’s funny, but gorey, and the fights are so dominant that there’s not a lot of plot. You can get through one in qa matter of minutes if you don’t stop to inspect the art. Every time someone tries to interject some exposition Saitama (The protagonist) refuses to listen unless they cut it down to twenty words. The premise is good though, I like it. I’ll have to check out the cartoon at some point.

Has anyone else been getting Amiibo cards? I have some doubles, but I’m not sure how I want to go about trading them away. The Mii Amiibo are a toys are us exclusive, but the other day the import price on them dropped down so low that it was cheaper to get them from japan than to bother with TRU. You have to admit that’s pretty sad though. TRU has had terrible pricing on new stuff for as long as I can remember, but not even competing with international sellers is pathetic. They are still within a few dollars of the shelf price of TRU last time I looked if any of you guys are into that. Mine are going to be Reggie (Gunner), Nina (Brawler), and Jolene (swordsman). Which means that none of the figures will match the gender of the Amiibo saved in them. I could have done Ed as the Brawler, but the incongruity of it all amuses me. If they weren’t so expensive I’d get enough to do the whole cast, but that’s a bit much. My medical stuff is still really expensive, so I have to budget these things pretty tight. As soon as I can get caught up I’ll try selling some drawings again on ebay. Maybe I’ll open it up to being just cheesecake all the time like the Wapsi Square dude. He seems to be doing alright.

I haven’t been to the basement to look for ebay fodder since I got sick. I know there are some old figures down there I really have no use for, but I dare not venture down since some water got in and it smells moldy when I lean in. The last thing I need is some kind of respiratory thing going on with all the other shit that’s still wrong with me. I did lose four pounds since I decided not to have soda in the house though. It’s kind of hard to argue that they aren’t a big part of the problem with results so obvious. I super want it all the time though. On grocery days, or after apointments I get a bottle and try to nurse it as long as I can. It’s really a good thing I never started drinking alcohol.

Anyway, I hope to get caught up on pages this weekend and ask for new patreon avatars on Monday next. If I can get out ahead of things maybe I can get my shit together before xmas…

Oh my god these two go together perfectly! They’re like whiskey and hunting ^_^

Did you mean “like guns n roses”? Cause that’s a thing.
Bullets and beers kill more people every year than guns and playing cards, … Unless you draw eights and aces….

Don’t mean to be the downer but I’m getting more and more nervous about all these couples springing up! I’m cheering for them, but I fear the drama hammer will drop soon! Q^Q

Yep. At least one of these has to fail horrifically or otherwise implode. It’s the rule of writing. When everything is going well, it then has to go bad. :(

I agree, too. I suspect an inside snitch will report Thomas and Carol to Corporate (Mike being too low on the totem pole). Now, who might be a Corporate snitch?

I don’t think it’ll be a snitch, not right away. I think Thomas is going to relax a little out of happiness, and Wes will attempt shenanigans. Perhaps he’ll get caught and exercise blackmail?
Or there won’t be horrible events, and we can keep enjoying happiness. It could happen.

PREPARING TO DROP THE DRAMA HAMMA

You may notice that these two are already set up for a fall. Jess is like the wind, when does she blow on? Meanwhile Jo is already thinking long-term.

Not trying to be a negative Nancy here, but haven’t they only known each other for like, a couple months? Seems pretty early to be calling each other soulmates.

Which is why Jo said “maybe”.

Dude. DUDE.
THE ONE PUNCH MAN ANIME IS SO GOOD.
The Saitama vs. Genos fight from episode 5 is absolutely amazing, and I cannot WAIT until the anime reaches the Dark Matter Thieves Arc.

re: comic title, i see what you did there.

I’m not even gonna TALK about the prices on their pokemon plushes. They are ridiculous.

As long as the drama doesn’t result in one of the ladies putting on a costume and mask and run around dispensing justice.

I think we’re all stocked up on crazy here

Wow.. That was fraking smooth.

Amiibos are always a tough game. I was considering getting the Mii Amiibos, but my budget doesn’t really allow for it right now. I’ll stick to the few that I have for now.

Also sidenote, I have Mario Maker Levels posted on the previous comic.

OnePunch Man 4Life! The first 6 episodes of the anime are out as well. Best action show since DBZ. Keep up the great work on the comic!

I didn’t realize you were a MSPA fan. Liked the nod to it in the title.

Ed was wearing a mind hoodie as well a while back.

I KNEW YOU WERE A HOMESTUCK I KNEW IT