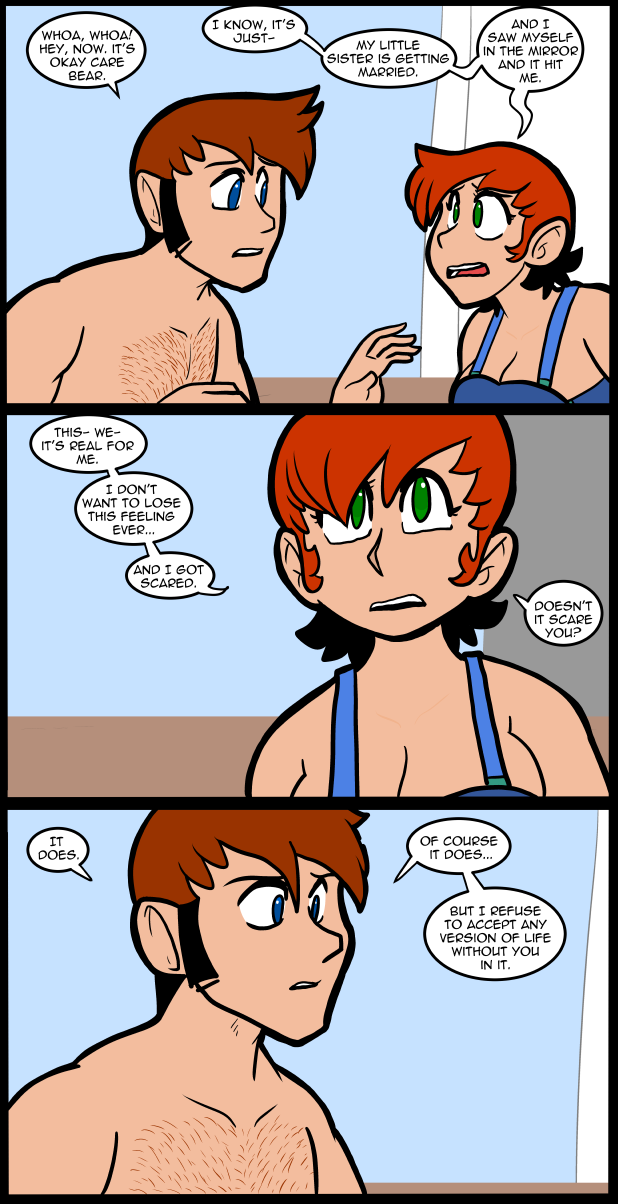 This could have continued to nosedive but Carol, being who she is, is starting to pull herself out of it without much help from Thomas. Looking back on this Thomas will likely consider himself lucky, but also begin devising ways to steer situations like this to their best possible conclusions. Such is the mind of a manipulator.

I haven’t had time to do much gaming, but I have been putting my Amiibo into matches against each other. About a half hour at a time. The results of this is that I’ve got 8 Amiibo that I can’t beat. Which is good, I guess. I’ll have 8 wise masters who can kick my ass and make me better… maybe. The chosen 8 are Ike, Ness, Villager, Mega Man, Pac-Man, Pit, Wii Fit Trainer, and Peach (Mario Party sculpt). The toughest are ike, Peach, Villager, and Ness. Depending on terrain they seem to be the 4 most likely to win.

I managed to get Palutena because I happened to be looking at twitter when the announcement that she was going to be on Amazon went live. I wanted to add her to the 8, because she’s so ornate, but Pit is representing the franchise right now. Maybe when he’s trained up I’ll cycle her in. I think I missed out on Robin and Lucnina, which is a shame because I actuaslly love Fire Emblem AND have Codename Steam, which you can use them in. Except I don’t have the adapter for my 3DS. I thought it was out, but no one seems to have it.

I’ve been keeping my eye out for single pack Amiibo Splatoon Squids but the scalping is insane. I really want to get the gun that comes with that one though. I think it’s just a regular rifle with a cool skin, but I get splatted by them a lot. I want to pay those guys back…

I have tried all the gun types, obviously. Right now I like blasters, which fire explosive ink. You can shoot around corners with them effectively, and they have a good blast radius if you are good at managing your distance. They require a limited level of accuracy, which suits my terrible aim. Also you generally only need 2 good hits for a splat. I’m not good with keeping on target for more than 2 shots, generally.
When the game was first out I liked the splatershot jr, which is basically an uzi. Inaccurate at distance but you could spread a lot of ink fast and it has a shield sub weapon. Unfortunately everyone has learned its weaknesses and it’s not as effective at it used to be. Most players keep a cool enough head now that if you use your shields they realize they can knock you out of range before youi can splat them. And you can’t ride the tower with shields up because they just bounce you off.
The sniper guns are essentially useless in my hands. I can’t see well enough or react fast enough to use them effectively in Splatoon. I keep trying them every so often, but it always ends in tears.
The new update has thrown everthing into chaos. The bucket weapon is really hard to deal with in zone control matches. If you get a team with older weapons vs a bucket brigade it goes bad fast if they don’t know how their guns work.
Also, the gatlins are devastating in the hands of an experienced operator. You have to really time your attacks to take one out. They are very vulnerable while charging, but have insane range and power while firing. I like them but haven’t practiced enough to be good with one. You have to plan your moves with them and I’m more of an “in the moment” tactician. Meaning that I just run at my opponents, screaming, until someone shoots me.
That said, I’m useful in ranked matches. I’ve played enough that I don’t drag a team down anymore. With a regular blaster and my ninja gear I can disrupt the other team well enough to at least be second place most of the time. Sometimes I’m really on fire and get first too. If the rest of the team doesn’t have a clear idea of what we’re doing though… I end up getting owned over and over. Recently I’ve had a lot of teams where 2 members just sort of wander off halfway through a match and stop trying to do whatever the goal is. Then it’s just me and some Japanese kid trying to hold the tower, or control the zones on our own for whatever reason. I had one guy just go sit in a corner fro a whole match. Not like his controller failed or something. I watched him go to a specific place then hide in a corner every time he spawned. It wasn’t near the tower path or anything. Maybe he was trying to lose on purpose for some reason? Wantd to rank down to win XP faster? I dunno.
When you get a random team where even one other guy gets how a map works it’s really cool though. You can trap the other team by their spwan point and brutalize them.
I really want to play now, but I have a lot to do so I’m saving up for splatfest, like I said before. It’s gonna be crazy with these new weapons in the mix. I hope the stages are fun. The last time it wasn’t a set I liked very much. Right now I like Camp Triggerfish, Moray Towers, the updated Overpass or underpass… and the rusty harbor one.

and I quote, “I have to start my workday with my traditional declaration. FUCK!” is pretty high up there in terms of suave romance. Many people could give no fucks, but we have thomas who at the very least is giving a fuck a day. Such is passion.

hahaha, this kills me.

About that adapter, it not out until October 2, at least here in the States. I don’t know about the avialiblity of the New Nintendo 3DS, but have you thought of that?

The new 3ds is too big an investment right now. Even after the system I’d need a new micro sd card, and there’s a whole process to it apparently. I was also hoping to hold out for a special one. Like fire emblem of something.

3dS’s usually come with a 4GB card. If that helps

I’d just replaced my 3DS when the new ones came out. Even if I hadn’t, though, yeah, the process is just a huge pain in the butt. Can’t just swap cards over, you have to use an internet connection to transfer your data. If it bogs out in the middle (which has been known to happen), GOOD LUCK. So far, not regretting the lack of upgrade – not enough games coming out where it really matters anyway.

There’s a game I want exclusive to the new 3ds. Also, it takes 4gB to download, anyway.

The new 3ds will be a small investment, since I’d like the 64GB card. I have 32 on my old one. I’m hoping I can sell it and make up at least half the cost.

I’ll make it a reward ti myself for getting a new job, which is my focus for now.

I wish you luck with your go fund me page.

I’ve already had more than my share I think.

That is almost word for word what I said when I proposed to my wife, almost 20 years ago.

Aw, you old romantic you.

That was handled extremely well on Thomas’s part. Good on him.

Shit, I’ve acted crazier that this in less time than they’ve been together.

Man, I hear ya on finding the Squid amiibos. They weren’t sold by themselves in America, so I found myself bidding on 3-packs every single day for three weeks until I finally got one for like $60. And now I’m too paranoid to open it because of the rumors of them producing more individual squids in other regions (and of course, today I see a three-pack for $55, so, that’s great).

Haven’t played since the new update…I’m worried that my poor old Aerospray RG is going to be outclassed by those buckets. Not to mention that I haven’t even ever reached level 20, and now that the cap is more than double that, I feel like Splatoon is becoming just like every other shooter where I’m just gonna be too outclassed by the people who are much more dedicated to it. Although, if my competition just goes to the corner and stands there, I guess I might still have a chance during tomorrow’s Splatfest.

The angle of Carol’s face in panel 2 looks fantastic!

The way her lower eyelids look all trembly– masterfully done!

That last panel was so sweet.

Talking Carol off the ledge, so to speak

As someone who has said these very words…. and lost the girl that meant the most to me, this hit me pretty hard. But it just goes to show how much I love this comic. These people feel real, they act real, and at times, even the strongest is really really scared… I can sympathize.

I’ll agree with that.
I get “very into” the stories about the characters, in this comic. Such as: I hope that Maddi the librarian-person, and John, find kind and loving boyfriends or girlfriends. I like this comic in big, big ways! : )

I might just be cynical or something, but that last sentence makes their relationship seem dangerously codependent to me. I could be wrong about that though.

Look at your twitter messages: I don’t have a favorite [out of context movie line(s)], but this is my favorite O.O. context TV line:

Andre the Giant- “…And then she bites you on the behind, and goes…[Andre does a horse whinny]: Wheee-Heeeeee-HEE-hee-HEE!”

I meant: [Looking at your twitter messages]. Darn foggy thoughts.

The “she” that Andre is talking about is a yellow horse, that he + Hulk are looking for, in the 1980s cartoon: Hulk Hogan’s Rock ‘n’ Wrestling.

Not a favorite TV show of mine. I guess if you were a kid from 0-10, + you were really into pro wrestling, then maybe this cartoon would be your thing. I don’t know. Each person has his or her own taste, + all of that.

I’ve been in Carol’s shoes (just swap the sexes around) only my “Thomas” decided to get cold feet and run halfway across the country. Still, like others have said, the characters feel real, and I’m actually invested in them and how they’re doing. Keep fighting the good fight Jackie, I’ll keep reading the good read.

My ex is a bit like Carol. That isn’t why we broke up; we just figured out we worked better as friends. When she’s in one of these moods… there isn’t much that anyone can say that really helps her. What she needs is a hug. The right words with those hugs works better than just a hug, but the most perfect words without that hug have very little effect.

This was especially frustrating before we moved in together, as I lived 1052 miles away, according to my odometer.

That said, different people are different.