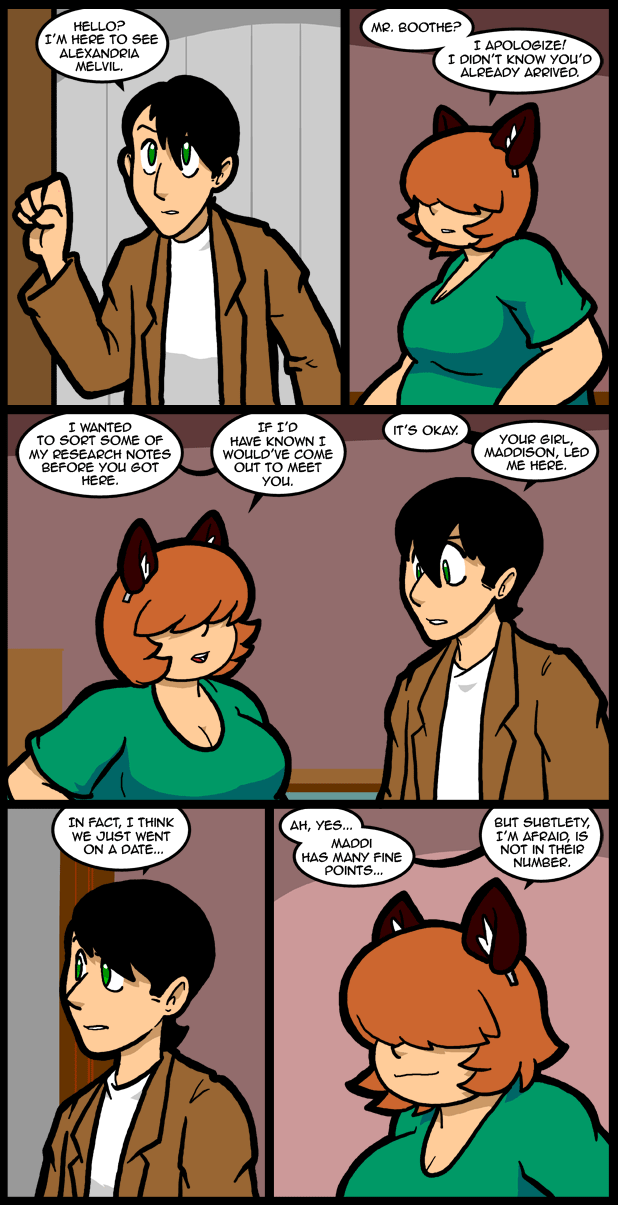 Alexandria is that rarest of person who can sound official enough to command respect, even while wearing cat ears… Either that of Reggie is too shaken over the Maddison affair to be 100% on his game.

It occurs to me that now that I have a functional PS3 I could, potentially, play games online with people. I’m not one for that sort of thing, generally, but I’m at least open to the possibility. I don’t think any extra fees are required for Sony’s online stuff. Maybe an expert can clear that up for me. I also don’t really know what games have been available for the system as I basically quit paying attention when it came out and I knew I’d probably never have enough money to own a 360 AND a PS3. At this point I have access to the Teen’s sad library of games, a few that were given to me by a far too generous reader, and One Piece: Pirate Warriors 2, which I downloaded because it was on sale in the online store when I had my cousin’s old PS3 in working order. (I’m probably going to see if anyone wants the old one for parts. That’s about all it’s going to be good for unless someone just wants to use it for Netflix or online only features.)

I actually like Pirate Warriors. I assume that the gameplay will be more or less identical to Hyrule Warriors, which makes me more excited about that game than I was. I also borrowed Deadpool, which I played a little of when she was stuck, as you may recall. It’s a fun game for what it is. I’ve played a little of Uncharted, but it honestly didn’t grab me right out of the gate. Maybe it takes a while to bond with the cast? I know I’d like to try The Last Of Us, but even a used copy is , like, $20- so I can wait a little longer, I guess. Anyway, if any of you guys are PS3 user let me know. I think my username is BetweenFailures. I use it for everything. I don’t know if capitalization matter. Either way it’s probably some version of that. If you put your name thingy in the comments I can add you as a friend the next time I turn it on.

I was looking to see if any used copies of Skylanders Trap Team were available anyplace and read some reviews of it. Apparently it’s pretty broken. When you switch characters it freezes a lot of the time. That’s a pretty huge problem for a game that relies on switching characters constantly… It’s disappointing to find out, but hardly surprising. The further a series goes with Activision the more likely they are to get kind of loose with the quality control… I’m going to see if they have any intention of releasing a patch, since the 3DS is capable of letting you patch flaws. If not I may just give that version of the game a miss. It’s a shame though, the other handheld versions were better games than the console releases in some ways. At least up till Swap Force, when they added the jump mechanic into the main series.

On the Marth Amiibo front I have decided to contact a friend in Japan to see if he can find one for me there. Fire Emblem is way more popular there so his production run was larger. Apparently they are identical to their American counterparts internally. (There may be cosmetic differences, but if there are I’d probably prefer the Japanese version anyway…) Since Nintendo has made no statements about potentially doing a second run of the character, and people are price gouging after market so heavily, I figure it’s better to give money to someone I know than some dickhead who just wants to screw over genuine fans. I’ll likely pay just as much for the thing as if I just bought it on Ebay, but at least I won’t have contributed to the reinforcement of bad behavior.

As far as the rest of them go I’m seriously thinking about preordering any of them that I will want that will be shortpacked. Ike, for example. Shulk is also a Gmaestop exclusive, so I’m going to have to preorder at least one anyway. There may be shipping numbers out there someplace. If I get a chance I’ll take a look and see who will be important to lock down. I got lucky with the Wii Fit Trainer and Villager, since I got those on day one. Their after market value is climbing steadily. Samus, Fox, and Yoshi are also, surprisingly, selling out even in my location. We are swimming in Mario, Konky Dong, Peach, Kirby, and Link. Wave 2 has not shown up.

The Teen has a guest over. I think she’s staying for most of the break, so I’m just not going to bother her about posting anything. If she acts like she wants to I’ll let her, but I’m not going to make a thing out of it.

I hate for the first post to be all Grammar Nazi… “You’re girl”?

It’s fine. I appreciate legitimate corrections. You weren’t first though. I got a tweet, like, a nanosecond after I posted about that one. XD

Makes me feel a little better about it, actually.

Isn’t “Your girl” correct for the possessive sense. “You are girl” sounds like dumb caveman-speak.

I don’t know why you’re seeing that, but that’s not what it says.

So was it “You’re girl” previously and got fixed or was it “Your girl” to begin with?

I fixed it ages ago. You shouldn’t have been able to see the old version this many days later.

I’m now the center of these many internet comment layers.

Hey Jackie just figured I’d drop a knowledge bomb on you real fast. PS3 Online is FREE. PS4 Online is free unless it’s with friends in which case you must pay for PSN Plus where you get a couple free games each month for the PS3, the Vita, the PS4, and the PSP along with PS4 friend-online. It’s weird like that.

That’s a really strange set of rules… I wonder who came up with that.

The same people who make insurance a nightmare to navigate.

I’m here to tell you, when you master making Insurance obscure, you’re ready to work for the Government.

I think Alex is now my role model.

I don’t have a PS3, but I cleaned a friend’s about a month ago. He has been informed.

Alex is the queen bee of that crazy crew.

Can’t wait to hear the conversation with aleX but I.feel like this is going to take a turn on the story with the blank graves

Just read the whole story in like 2 days, gonna read it again from the beginning but, can you make 1000 pages tonight please? I can’t wait to read more.

I have had no trap team freezing. Even putting characters I shouldn’t have. Everything works fine.

In fact, I think we just went on a date…Yeah, Maddi had quite a boobcrush on his left arm back there.

My psn ID is sario528, but I’ve only been playing Destiny recently.

My PSN is Verivichi678. Also ps3’s online features are free. That was a major selling point over xbox360. What genre of games are you interested in? There are some terrific online games in every genre.

A PS3 that only works for netflixing? I would totally take that off your hands. Of course I live two states away and have no way to procure such a thing…

Hi Jackie,
I read what you wrote, on the twitter section of this site, about the passing Of Christine Cavanaugh.
To me, that’s very sad to hear about. For all of those ppl. who aren’t kind of geek-like about TVcartoons: Christine was the Voice of Dexter, from Dexter’s Laboratory, aka Dexter’s Lab. Darn.

Pirate Warriors 2 is somewhat faster-paced than Hyrule Warriors. You certainly can rack up a higher kill count per attack combo in PW2, especially when former admiral Kuzan becomes playable. He’s a beast when it comes to crowd control.

If you’re interested in the DC universe, DC Universe Online (DCUO) is free to play online but has micro transactions and expansions you can buy if you want.

I have OP PW2 if you are interested in playing together. I’m trying to S rank the later missions and unlock level breakers right now, so I wouldn’t mind the company.

Journey (multiplay online, but no talking or typing to your partners, so shit gets interesting)

The unfinished swan (for puzzle lovers)

Portal 2 (has a two person mode if you can get the teen to sit down and figure out how to cooperate and solve team puzzels, but the single player is really great too)

Batman Arkham series: Start with Asylum, its the first one, and cheap as hell now, City is also amazing and more expansive, Arkham Origins is not as good and made by a different producer, its definitely not as good but if you like the series, its worth a shot.

Uncharted is amazing, if you start with the first game you have to realize it was a near first release game, so things are going to feel a little stiff going through, but its a very interesting game with a good solid story, and 2 and 3 just get better. Overall I think 2 is the best but I also absolutely screamed trying to kill the final boss in 2, They’re all great though.

Anything Dynasty Warriors (sans strike force), If you like hyrule warriors and you dig the One piece version, you might want to try the mother title or the gundam versions. They’re fun and the originals are a fun way to learn a little more about the three kingdoms era.

“Tales of” series has a lot of titles, if you like RPG’s there’s really not a bad choice among them.

That’s obviously a lot of titles but there’s something there for a lot of different moods, Keep an eye on the playstation network for sales on old ps1, ps2 and network original game sales, they pop up from time to time. If you want a few more recommendations or suggestions send me a message.

It’s awesome to hear you’re interested in going online on your PS3. My PSN ID is the same as my deviantArt ID, ffbros .

As far as multiplayer games go on the PS3, Uncharted 3’s multiplayer is avaialble free-to-play as a standalone download. I’d recommend both Uncharted 2 and 3 for the story if you get the opportunity.

What types of games do you normally play online? I got a few here and there.

P.S. Check your deviantart messages when you get the chance.

I don’t play much of anything online. Animal Crossing, and Mario Kart are about it. A very little Smash Brothers if the connection is okay. The systems I own are kind of dissuasive to online play.

I miss PSO so sad that red ring rico bit the dust :(

PSO on the pc has a server that is a private one. Scthack I think it is called.

I love how Reggie just refrains from mentioning the ears right away.

Lots of huggable peeps in this part.