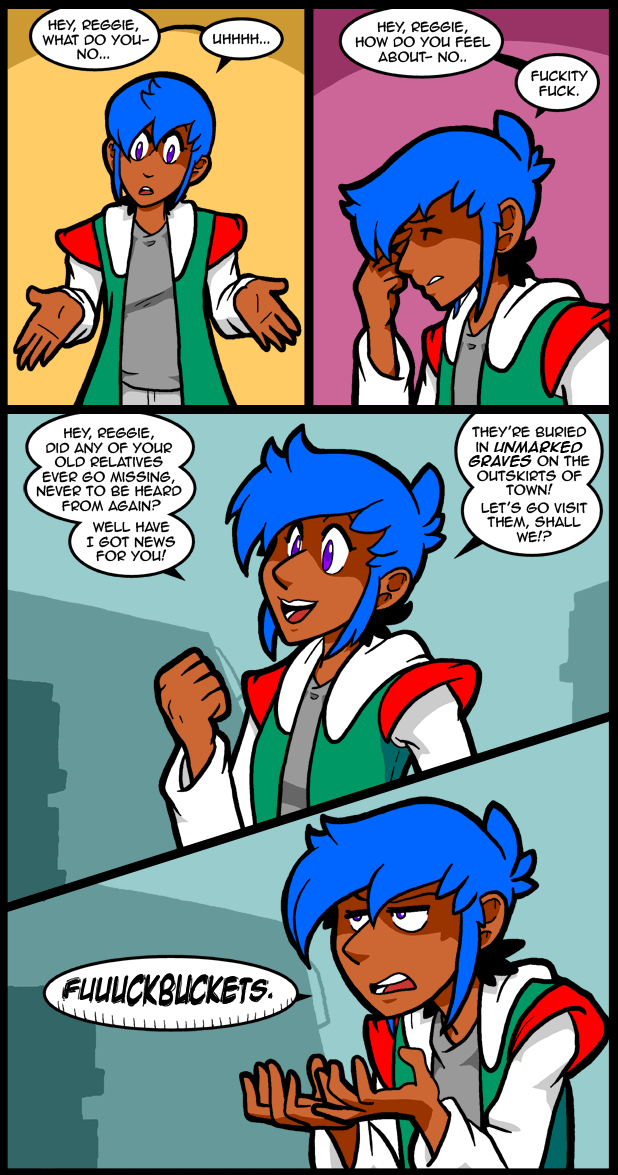 Brooksie is at a point where if this was just some work related thing she could get through it without a problem, but since it’s a personal matter she’s having more issues. The strained relationship between these two has hurt both of them. Many of the circumstances haven’t even been their fault, but they got carried away on the tide of bad feelings. I’m sure a few people have already realized this, I know a few of you haven’t, Jolene’s experiences with Reggie are different than the other workers. His nature is braggadocios. How irritating that is to each of the cast members varies based on their personalities, and how Reggie sees them. Jo is the kind of person who causes others to want to help them. Her experience with him early on was better than average because of this. He showed her a side of himself that few people get to see; almost humble, definitely helpful, Reggie.

I’m actually going to stop the shop talk here, because I fear I’m revealing too much. Better just save some of this stuff for my drafts page. XD

I don’t know if Patreon sends an email when I put out a new story chunk, but I bet some of you turned that feature off, assuming it exists. So there’s a new bit of The Wandering King added to the old PDF. I kind of left it on a hanging thought so I may go back to it before the end of the month. No promises.

I am now adopting “Fuckbuckets” into my repertoire of awesome ways to curse. Thank you for donating such a wonderful combination of words xD

You too huh?
Would also like to see that panel as a wallpaper, just that section enlarged.

Actually her coat reminds me of Wheeljack’s colors from Transformers. And his character just got a new toy in their Masterpiece line.

I’d make a reference like ‘oh God, Jo is Wheeljack’s Kiss Player partner’ but then I’d have to describe Kiss Players and that never ends well.

Yes, you should all chip in and get me masterpiece Wheeljack instead of doing that. I probably won’t make a tiny Jo figure to kiss his genial faceplate long into the night…

Fuckbuckets is going on the list. It just may be higher than asscracker at this point

Saw “douchecanoe” earlier today, and thought that it made my week.

However “fuckbuckets” just stole the award. In the same day.

Jackie’s got serious talent in the awesomeness department. If I were 20% as awesome, I’d be cooler than I am now. (I have no idea if that statement is true, but if it’s not, then someone undervalued Jackie’s awesome.)

Can I get a wallpaper of the last panel? :3

It is rather magnificent.

Almost just as good :)
Thanks!

Yeah, go with that last one, Brooks.

Or a shitty metal band with 7 fans and a frontman who thinks he’s a rockstar because he got paid $20 to sing once..

Oh, and @Plasma Mongoose nailed it; we have PhotoBucket, after all.

So does that make FuckBuckets the “adult” PhotoBucket?

That sure works for me!

That was pretty much what I was thinking too.

One of your best pages, left, cackled out loud while reading it. Brooksie’s facial expressions are too perfect. I’m going to spend too much time trying to match the “fuckbuckets” one…

I love you, Brooskie o.o

For an actual representation of the term, tis a large container of stuff stored at reproductive clinics.

Oh, good, someone else uses that word.

Remember that time Brooksie had a bucket of fucks, but gave one too many about the grave stones and now she has zero fucks to give?

The changing background colors, matching her high and lows, are amusing. I enjoy the effect.

I want a wallpaper of that last panel. Jo is my favorite character, probably because she is the chibi.

I must say you have just the right amount of words on these things.
I missed a few updates and scrolled to the bottom to get the navigation links and find Fuckbuckets and it alone was “I must find out what prompted this” not …”Damn now the punchline is ruined before I read the whole thing”

Navigation exists at the top and bottom of the pages, just in case you don’t feel like scrolling next time. I put it both places for situations like this.

I like Jo’s angry + frustrated expression in the end, when she realizes that she wants to ask Reggie for some answers about the tombstones, but she sees that there probably is no polite way to ask for the answers. (Hee, hee.) :D

“Well, that certainly illustrates the diversity of the word.”
– Conner MacManus

People were staring at me after I first read this… because I literally laughed so hard at the last panel, I fell out of my chair. I want that on a poster… and a t-shirt… and a car magnet… and EVERYTHING IMAGES CAN BE PUT ON.