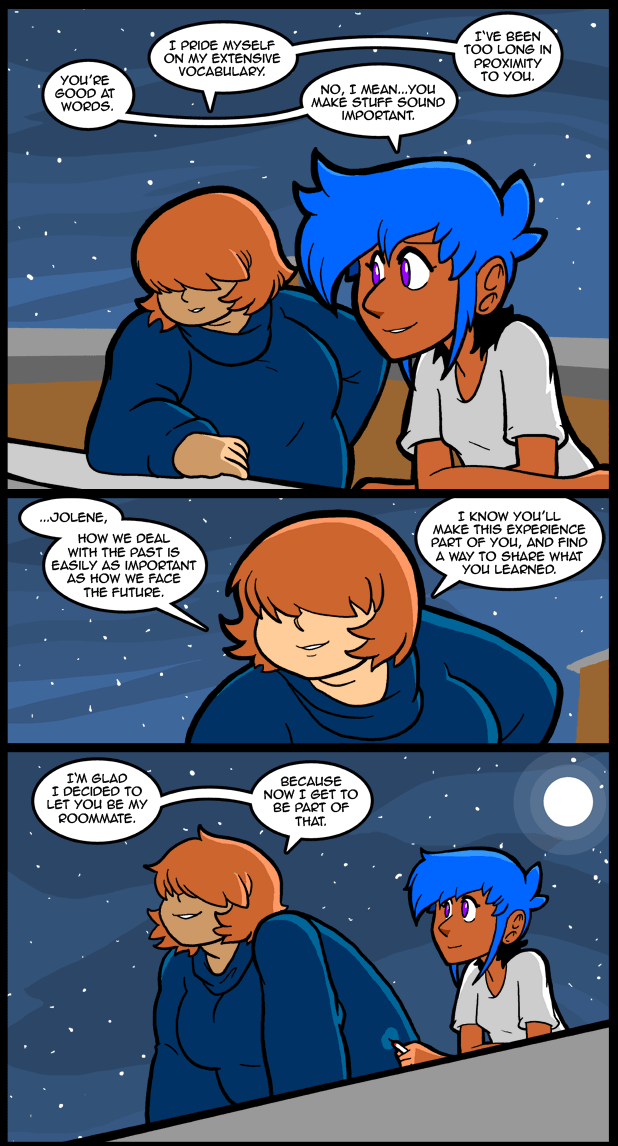 The backstory of Alex and Jo has only ever been implied. Why would Alex, who is independently wealthy as far as we can tell, nee a roommate at all? How did she find Jo? How long have they lived together? These questions will be answered eventually. Some of them you might be able to guess. Jo tends to seek out people she can cling to. There’s probably a story behind that too. I like these two. I only wish I could tell their story faster. XD

Hyrule Warriors came out recently. I’d like to get it at some point, but I just can’t convince myself to spend the money this close to Smash Brothers for the 3DS. I’ve always disliked the tendency of companies to bunch all of their new releases too close together. I’m sure there must be a reason for it, but it really seems like things would work better if they staggered things a little. My suspicion is that they try to have them all ready just before xmas. Since I don’t play by xmas rules it just irritates me. Particularly in light of the preorder bonuses and whatnot. All that aside I know I’ll actually play Smash Bros on the 3DS because I can take it places and I can turn it on while the comic saves, or whatever. Sitting down to play a game gets harder and harder to justify the more commitments a person takes on. I’m still playing Animal Crossing, which is why I haven’t bought Tomodachi Life, (That and the price…) because I don’t feel like I have time to manage another island of virtual beings. I did get a chance to demo Hyrule Warriors, and it’s pretty much what you expect of a Dynasty Warriors game, except better looking, in my opinion. I got the second One Piece version of Dynasty Warriors on sale and they play, essentially, identically. I suspect that it will get repetitive after a while.

I keep a fan running in my room almost constantly because it’s the hottest room in the house. It has the worst ventilation and I keep a computer running in it almost all the time. Even when I leave I keep the fan going so that it doesn’t have to struggle to cool the room down when I return. The other morning the fan just fell apart. I’ve never seen anything like it. The whole blade section just came undone out of nowhere. I guess the constant shaking slowly undid all the screws and they all failed at the same moment. I can’t even begin to guess at what the odds of that are. Once I put everything back on the fan was fine again. It would have been a real disaster if the cage part hadn’t kept everything in one place. Otherwise the blades might have just whipped off at random and done who knows what kind of damage to something. The fact that it happened while I was listening to a spooky podcast didn’t help matters either.

My guess is that Alex is eager to teach and Jo is eager to be taught. That’s a strong enough foundation for friendship to me.

Smash Bros comes out in like five days that’s the only game I KNOW I’m going to buy this holiday.

You know, I think you might be on to something. Been loving these last few pages even more than usual. :)

Find something to believe in, then pass it on…

I want to say something interesting but my mind keeps unhelpfully fixating on the fluctuating, possibly odd (possibly not), behavior of the cigarette for the last few pages. I’ll have to wait till after the smoke break…

And another gratuitous comment so its not stuck on unlucky “13”.

The air is never completely still. Watching the smoke rise (and fall!) from my wife’s cigarettes in semi-random patterns was one of my favorite ways to stay awake during her interminable “conversations”.

Alex will probably deny saying that under oath.

Alex’ depiction in that last panel for some reason strikes a chord with me. She looks like she would have the strength to snap me in two… and I’m very ok with that.

Heavy words from a heavy lady.

Also: Ghosts undid your fan. They have a perfect sense of timing. It’s all they have left. That and reverse engineering apparently.

Alex is such a hoot. She’s well-educated and well-spoken and invariably willing to share her knowledge. I have to assume she’s good with people, too; being a librarian is not an easy job (I’ve known a few — one is working in IT now). A friend of mine has a similar personality, although she’s an engineer; good luck trying to trip her up with trivia questions.

My guess is Jo showed up at the library one day to see if anyone had posted any “Roommate Wanted” ads. Libraries and college buildings are frequently used by people who can’t afford to advertise in the Want Ads — newspaper advertising has gotten very expensive. As for Jo seeking out people she can cling to, Alex is a mess of woman to hold onto. If John Kepler pairs up with her, he’s going to have his hands full (literally and figuratively).

Concerning your air circulation device (is this a fan letter?), I find that most fans have a plastic knob that holds the blades in place. The thread is usually in the opposite direction from rotation — if the blades rotate counter-clockwise, the knob will screw on normally. If the blades turn clockwise, however, the knob will have a left-hand or counter-clockwise thread. This usually keeps the knob from loosening. I’ll bet if your fan turns in the same direction as the retainer knob, it’s probably made in the Workers’ Paradise, the Peoples’ Republic of China.

This comic is too deep and meaningful, where’s the funny? ;)

Take whatever time you need for their backstory! I’m ok with the pace already!

I couldn’t help myself with Hyrule Warriors. I caved and bought it today. Still haven’t opened it due to my guilt over my weak will. Gah! $60 gone!

“The fact that it happened while I was listening to a spooky podcast didn’t help matters either.”
I once had a bugzapper go off while I was working in a circuit box. That WILL get your blood pumping.

Regarding the fan: This sort of catastrophic failure (when it stops working and breaks and makes a mess all at once) is actually not all that uncommon. In older devices and systems, especially ones with constant, chaotic movement (like vibration), the metal of the screws is able to built up small defects over time, while the plastic becomes harder and more brittle as it ages. If the device isn’t built with very much redundancy (like it has exactly the number of screws needed to keep it together and no more), catastrophic failure is especially likely. Once one screw fails, the weight or other forces it used to counter spread out through the structure and add strain to the other screws and key structural points, making them more likely to fail as well. Combine that with a sudden failure in the first component, and you end up with all the components failing at almost the exact same time. It can be especially bad in rotary devices (like fans), which are usually built to be fairly well balanced so as to avoid excess vibration. Then, when a part fails, it often throws off the balance on the rotor, which causes more vibration, which causes more stress on other components that wasn’t even supposed to be there, making failure even more likely. If you’d like to see an example, there are some really great slow-motion Youtube videos of windmills that fail in high wind. It’s kind of amazing to see a structure that had so much thought and engineering put into it just tear itself apart like that.

Damn you! Damn you and your deep storytelling!
I’m not crying, you’re crying!
Haha, feels like you really understand though. Kudos to you.

“How we deal with the past is just as important as how we face the future.”

Kind of sounds like Kirk’s lines in Star Trek II – The Wrath of Kahn;

Kirk: No. Not like this. I haven’t faced death. I’ve cheated death. I’ve tricked my way out of death and patted myself on the back for my ingenuity. I know nothing.

David Marcus: You knew enough to tell Saavik that how we face death is at least as important as how we face life.

David Marcus: But good words. That’s where ideas begin. Maybe you should listen to them. I was wrong about you. And I’m sorry.

Kirk: Is that what you came here to say?

David Marcus: Mainly. And also that I’m proud – very proud – to be your son.