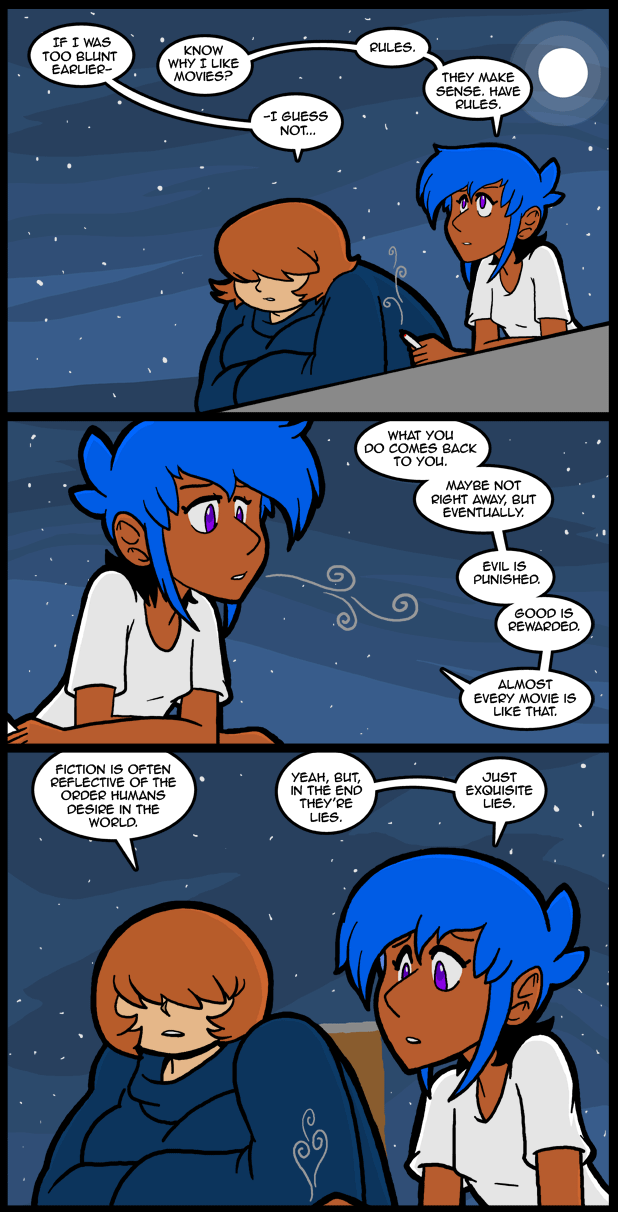 Jo may be having a tiny existential crisis.

My crisis is still photoshop based. I’ve done every concieveable thing to make that damn thing work, but it has to be some kind of random windows update that ruins the program’s ability to sense pressure. As I said before I can make CS1 work okay, but it’s just not as stable, and sometimes I forget to save, or it crashes while saving. Manga Studio is like trying to draw with someone else’s hands. Nothing feels right. Coloring is also a massive hassle because I can’t see the colors well enough to tell when I’m using the wrong ones. I’m going to have to make a little color guide and try to import it to MS if I have to go that route. On the up side the paint bucket seems to work better in MS compared to PS. You can color an ink layer and it doesn’t look all weird if you just leave it on. It’s slower though. I really liked my little coloring filter in PS. I dunno. I’ll figure something out anyway. If nothing else I’m going to try ang complete this section with PS1 so that they at least look the same. After that I’ll play it by ear.

Today was actually the first day I tried to sit down and seriously draw something in Manga Studio. It was the Carol’s birthday image. I have a real problem with how obtuse some of the controls are. Managed to get something out of it anyway.

The Teen has been sick for a few days. She actually stayed home from school two days in a row. She keeps saying she’s going to die, but I’m not getting my hopes up. I feel like she’s going to make it, so I won’t be getting her sweet, sweet, television… I bought her another pile of guitar games. None of which I like particularly, but one of which I refuse to be in the same room with if she plays it. I’m not a fan of country jams. I can tolerate a few songs, but on average I’d just as soon avoid it all together. Only one other kind of music do I dislike more, and that’s Reggae. Don’t try asking what my problem with it is. I just don’t like the sound of it, especially modern frat boy Reggae. Country I tend not to like the sound of AND I dislike the content. My grandparents are country people. I was raised with it around all the time, but something about it… You have to go pretty far back into the archive to find my sweet spot for country. Most people would probably call it American Folk music now.

Anyway, whatever. If I’m honest I hate more kinds of music than I like. It makes car trips a real hassle. The Teen can’t exist for more than a few seconds in silence. Plus she is opposed to pretty much everything I can tolerate. This fills her with the same kind of sadistic joy that I get from mercilessly teasing her. It is ever a source of strife.

As far as I know there has been no progress made on her novella, The Ruiner.

Movies are mostly escapism by design. If you don’t like the world you’re in why not create one?

“But in the end they’re just lies.”

Well, yeah. That’s why it’s called “fiction”. They just (as Bill Shatner put it) “made it all up.” But as my Dad once told me: “If everyone knows you’re lying, it’s not really a lie” (meaning: you’re not trying to deceive anyone).

And movies that accurately reflect the injustice of life usually tank, because — for most people — when you’re spending the money to go to the movies you’re either too young to enjoy thoughtful drama (you want flash and splash), or your real life is already full of injustice and you don’t want to be reminded.

Gosh.
Please don’t be downhearted Jo. Like they say: “Say it ain’t so, Joe.” [I just had to put the famous baseball quote in here]. Think of Hugo Weaving’s film, “Proof”, Jo. Most of us are pretty good people. Spoilers:

As the film’s message says, I suppose: [ Please acknowledge it- everybody lies, but we only do it, a small part of the time].

I guess I’m sort of your opposite, Music-Wise, I like (or at least will listen too) nearly every type of music out there. In fact pretty much the only music I wont go anywhere near are Rap, R&B, and some forms of Heavy Metal… and although I do listen to classical sometimes, for some reason, I never listen to it when I’m alone.

In most other cases, if even when I have a problem with the lyrics of a particular song, I have learned to tune them out & listen to just the music itself. Better chance of me finding a reason to like the song that way.

No. They’re a dream. But a dream’s no lie. Its simply a wish that enough energy has not been brought to realize yet. And given enough power any chaos can be ordered to your liking.

Albeit that leads to dictatorship and tyranny but one CAN be a benevolent tyrant, just don’t expect the trend to last.

“A dream is a wish your heart makes / when you’re fast asleep.”

Regardless of the fact that it’s probably my least favorite Disney movie, you win anyway. Because it’s Disney.

The cake is a lie!

I wish that my scale, and my weight watcher’s friends, believed that. :D

Only the Pie is the truth.

Well, I wonder if the type of movie she was planning on making will be derailed in favor of one about those graves.

Like many things there are sub-genres to each class of music.
I listen to almost anything to some degree or another.
My taste in music is … eclectic to say the least.
I personally can not stand RAP, C&W or it’s modern incarnations.
Funny thing I still like to listen to The Man in Black when the mood strikes or Stompin Tom when the mood is the polar opposite. XD

Have you ever looked at the gimp? It is open sourced drawing program. It may be worth a look.
http://www.gimp.org/

But at least The GIMP is free.

Escapism is a minor thing, and not all have surrounding influences… but most do, and most are somewhat predictable because of that. Meanwhile, I hope that Jo realizes that she can fix both problems to some degree, both by giving some justice to the deceased and by making movies that don’t.

As someone who prefers chiptunes and electroswing (preferably together, huzzah for Goldfish!), and who was forced to deal with pop-country for about a decade, I fully agree with your statements about said country. How horrific shit like “Before He Cheats” can be chart-toppers by appealing to *any* demographic will forever be beyond me.

I’m guessing the type of “country” to enjoy is probably more accurately termed “western” by people who care, if you are hunting it down, btw. Not a huge fan myself, per se, but my dad preferred that over my step-mom’s country, and she found it acceptable, so it was a better-than-nothing style respite. I’d find songs to ear-worm my dad with so I didn’t have to deal with other things… pretty terrible shit there, since neither one of them appreciated my stuff.

Someone else recommended GIMP, and I’d second that suggestion, especially if you enjoy customization… more specifically, if you enjoy the *act* of customization, since it’s a fair deal more involved than PS. I prefer it to PS because it’s free and open, alone, but you may need more push… either way, I hope you find something that makes your work easier.

The gimp can be scripted; by that I mean that it contains a full-capability programming language that can be used to control the beast, and even implement new features. Yes, it will take a while to learn to use it. But, with the right documentation, it probably isn’t as hard as you fear.

This comic has given such a unexpected curveball, up until now I took brooksy for more of a happy go lucky person but seeing this really makes you understand jo more. It’s kind of weird to see her like this but totally fits with her personality somehow. As they “the ones who smile the biggest are usually the ones with the most sadness weighing on their hearts”

Maybe someone already brought it up or you know about it already, but you ever tried using that PaintTool SAI program? It’s limited in what it can do compared to photoshop on a grand scale, but in terms of drawing it’s pretty close, and it really does feel similar to use. And there’s a few neat UI things they add, like rotating the view of the canvas easily and stuff.

It’s pretty cheap for the full version (compared to, you know, photoshop and junk), like $50 or something, but the trick is that it was never officially released in english. To get a legit copy you gotta buy the japanese version then apply the english patch you can torrent from anywhere.

Poor Jo. The movies have rules and make sense because they have only 90 to 180 minutes to wrap it all up. They’re like The Truman Show in that they’re a self-contained universe where the writers, director and producer control all of creation from Genesis to Apocalypse.

I’m not fond of Country, Rap or Reggae, either. Headbanger noise sends me heading for the hills. I like Classical music, early Rock and Pop (through the ’70s), Jazz, Rockabilly (at least until it turned into crying cowboys Country) and Surf. Oddly enough, one of the best places I found to buy this stuff is from Ernie B’s Reggae (http://www.ebreggae.com/) in Ed Dorado Hills, CA.

Interesting, thanks for the link, will have to check that out.

Regarding your CS2 Pressure Problems: If you haven’t yet done so, uninstall the drivers for your drawing tablet, and reinstall the most recent ones found on the manufacturer’s website. If that doesn’t help, try an older version of the drivers, if they’re available…typically this is how such problems can be remedied.

Hope you read this! I’m a huge fan, but not normally a commenter.

I’ve actually had to start installing them over and over because windows seems to keep losing them about 50% of the time after I start my PC. I’ve tried legacy versions and the most current ones. The program refuses to recognize pressure regardless. I’m pretty sure it’s a windows update, but it must be one you can’t remove because even when I roll the system back before the problem started it persists. It’s a real puzzle. Anyway, thanks for taking an interest and reading at all. I hope to see you in the comments again sometime. (^^)b

Ah ha. Are you running Symantec anti-virus? A friend had that happen to the drivers for her scanner. When I uninstalled Symantec, that behavior stopped permanently.

Me… I use Debian because I need to get things done and can’t be screwing around with Windows all day instead of getting paid.

I am using Norton… perhaps I can find a solution there. Thanks.

“Evil is punished. Good is rewarded…..Just exquisite lies.” Real life often works that way too-just not on our individual timelines.

I really like how you draw Joe’s smoke trails. The smoke is different for each of the smoking group, right? I thought John’s looked more like bolts of lightning…
Anyways, much love to the artist! Love your humor bro

I Always loved “Das Boot”, everyone got punished no matter how goo dor bad^-^