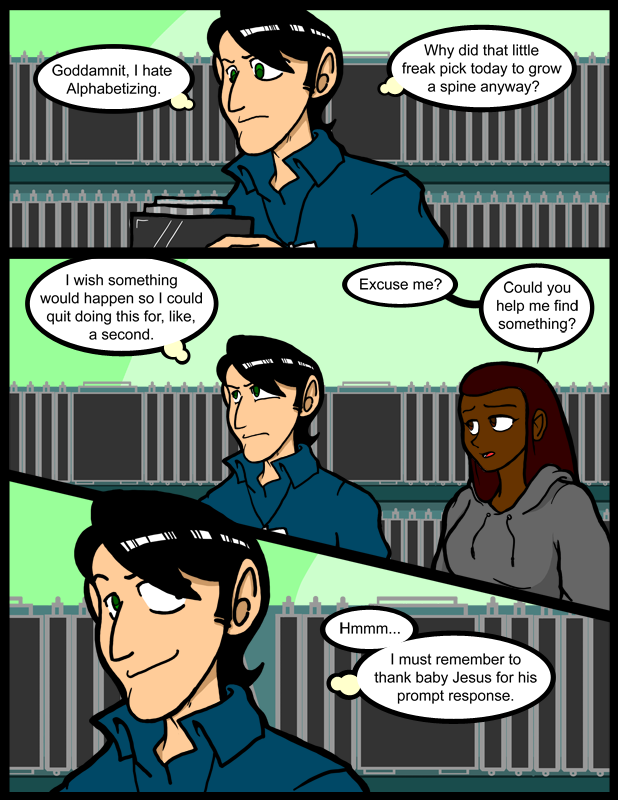 Happy Halloween to those of you who celebrate it. To everyone else, take the stick out already…

Back when I lived in Kansas, a few years before I moved, I used to take long drives around the town where I lived. The largest cemetery sits on a high point on the edge of town. It’s roughly square, and roads boarder it on two sides. The smaller road empties onto the larger one. At the point where they converge you can decide to go back into town, or out onto the highway and the blank lands beyond. I’ve always been drawn to the morbid, so I’d often drive through town in such a way that I could drive past the cemetery then decide if I wanted to venture further out, or return to my apartment.
The cemetery has several defacto sections based on the age of the plots in each area. The oldest parts were already filled with the dead. At the time my story takes place the newest section, which was almost empty, was becoming populated with scores of new markers. The smaller road runs along this new section.

One evening, while my roommate was riding with me, I took the path up to there. He was not as fascinated with the morbid as I, nor as courageous where the paranormal was concerned, but I was driving so he had to cope. As we rounded the corner onto cemetery road I noticed a little flame, dancing among the headstones, in the new section of graves. It moved through the markers, slowly bobbing from stone to stone. That kind of thing is commonly called a will of the wisp, or corpse candle, an they are said, by some, to be the spirits of the dead trying to lure the unwary to their doom. I always wrote them off as fantasy, but it was there, and hard to deny. I asked my friend to verify what I was seeing. He did, and became slightly panicked. I had to take him home, even though I wanted to wander into the graveyard and find out what the dancing light was.

The next day we went for another drive and, after we’d been out a little while, I casually began to drive towards the graveyard. My passenger realized what I was doing, and began to strongly voice his concerns. I ignored his objections and soon we were slowly driving down that familiar path. I was amazed, and he was horrified, when I we saw the little flame bobbing happily among the stones again. There was no way I was going to pass up a chance to fully investigate the ghost light this time. I mean how often to you get a second chance at investigating a paranormal event? So I parked my truck, left my passenger behind, and began walking across the road toward the light.

The cemetery is surrounded by a chain link fence, and you aren’t really supposed to go inside at night, even though the gate was never locked. I wasn’t going to break that rule unless I absolutely had to. So I walked right up to the fence, keeping the light in my field of vision the whole time. After a moment I realized that there wasn’t just one light. The closer I got the more lights began to appear. I stood there for a moment and the little flames stood still too. I moved toward the gate, and they moved away. They were moving in relation to my position and as my eyes adjusted to the dark I understood what was going on. All of these headstones were new, and almost all of them had reflective surfaces. One of the newest graves had two indentations for candles set in the stone. The light of the candles was reflecting from their actual location to the backs of some of the nearby headstones, and then to the front of the ones I could see. As I moved from place to place it made it seem as if a few lights were dancing along the ground in front of the graves. The mystery was solved. It was nothing more than a simple illusion. I returned to the truck and explained things to my friend. Strangely, I think he was disappointed too. Even if you have no desire to see a ghost I think a lot of us still want them to be real.

It’s a pretty safe bet that I’m going to be watching the Ghost Hunters live show tonight.  As I’ve said before I think that modern “ghost hunting” methods are flawed, but I still find it entertaining.

I watched Ghost Hunters when it first started. But then I got tired of the fat guy telling everyone it was dust or a bug. IF the ghost picked a guy up and threw him out the window, he would’ve said it was dust. That’s what pissed me off about Ghost Hunters

Anonymous poster here registering for the skeptic side.
It’s bad enough that American politics is dominated by people who believe in an invisible sky person. Can we at least agree that Occam’s Razor is a good yardstick?
Most stuff which has no known valid evidence but plenty of disproven hoaxes is probably just made up.

Remember a few years back when Halloween fell on Sunday and people were like, “Omigod!!! we can’t do the devil’s work on the Lord’s day!!! Let’s have Halloween on Saturday instead,” and there were people doing Halloween on Friday and Saturday AND Sunday? And other odd random days?!? That was crazy and stupid.

Especially considering that the whole point, aside from costumes and candy, is to ward off evil… albeit by scaring it shitless by appearing eviller.

DIdnt they do that with St PAtricks day to cause it was to close to easter? Wasn’t that last year? Or did I just drink for a week?

“I wanted to wander into the graveyard and find out what the dancing light was.”

Swear to God, if I was there I would have smacked the cheese out of you.

To those who are skeptics I reply with the following. You are skeptics simply because you have yet to experience something of the paranormal. I should know, I used to be one.

I agree completely. I am a sceptic because I have seen no (evidence of) paranormal occurrences that can’t be explained by science. Well, that combined with burden of proof and a general Occam’s Razor approach.

if you truly new the paranormal as some do you would scream with fright.

I want to scream with fright.

[And why does nobody comment on the actual comics any more?]

FJK324: You only believe in the paranormal because you’re too arrogant to consider a natural explanation. I know, I’ve been there.

hey, this comic shares name with my favorite pseudonim.

The discussions are often more interesting than the comics. That’s no fault of the comics. It’s good. The comics bring up deep emotional undercurrents that need to be discussed.