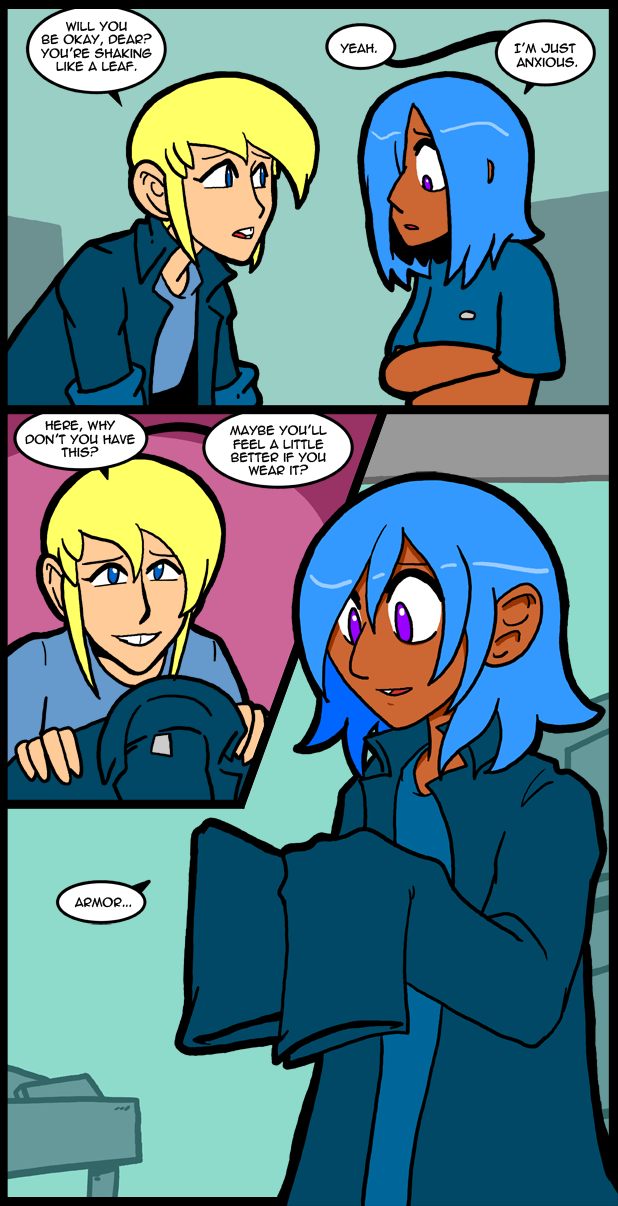 And so we have the origin story of Brooksie’s armor. Doesn’t really advance the story a lot, but I love junk like this in comics. Plus this is another one of those things I was excited from day one to get to the reveal of. I on;y had to wait, like, 7 years? Good times. On top of that this little arc still isn’t done with its trail of revelations. Oh no! Stay tuned. There’s even more for those of you capable of remembering every minute detail, and off handed tidbit, I peppered this story with. I know that a lot of people have been waiting for at least one of the things… :3

I don’t know if any of you guys pay any attention to the whole Brony thing anymore. It was cute for a minute then went south at the speed of light. For my part I still think MLP: Friendship Is Magic is a fun show. Exactly the kind of quality program that makes me feel better knowing that a generation will have grown up with it. I do not however endorse the dark places bronies took the whole thing to. They’ve soured a lot of people on fandoms in general. Far more than Trekkies (or whatever they call themselves) ever did. There is no word for normal, old, male enthusiast of the show, but I still am one. That said, I want no part of whatever bronies do in their dank headquarters. Still, I have kept an eye on the blind bag ponies. I missed out on Princess Luna unfortunately, but maybe she’ll appear again in a later wave. I’ve tried to stick to new name ponies as best I can. Rather than crystal, clear, or whatever, versions of characters I already have. Although if we’re honest it’s still 3 molds basically, with a few new ones included from time to time. The local Wal-Mart had a handful of the “saturated rainbow” wave and one of them was the show accurate mold of Fluttershy. Pretty much the only one I wanted, so as to fix the travesty of her original “I look like Rainbow Dash” sculpt. I’ve seen a princess version of Twilight Sparkle around, but it is… not good. Something went awry the day they okayed that sculpt, I’m afraid. Anyway, not important really, but it’s a hobby so whatever. Don’t judge. Or do. I don’t care.

My quest for the final Skylanders Sidekick is still stalled. There simply aren’t enough of the damn things left to buy to get one from Gamestop. I am not getting characters I already have at this point, or holiday variations. I’m done with that. I just want a version of each one so I can play the game with their unique mechanic. There’s still one swap force guy left and I’m gonna be so pissed if they wait till the next game for it to drop. Activision pulled that shit with light core Hex and it is uncalled for. The fact that they released 16 swap force guys is bad enough.
The console version actually tracks how many combinations you use in the game. It’s a massive number of possible combinations. I think you get a bonus for doing it though. How valuable that bonus is… I’m not sure about at this point.
I did actually finish Giants finally. 3DS and 360. I haven’t gotten the time star on the last level, but I will. I’ll also take the time to play all of the area challenges too, since you get gold for power ups, and I want to complete my favorite team.
It’s a decent amount of content for a game aimed for kids. The last battle is also kind of brutal. I might try nightmare mode just to see how horrifying it really is. Fans of the game asked for a challenge and I thing they actually decided to throw one at us…

I LOVE this comic, Crave. This is one of the cutest things I think we’ve seen. Granted, there’s been a lot of comic, but this one? This one makes me have such warm fuzzy feelings.

I wish I had a Nina in my life.

Nina is a lot like me in situations like this, I just can’t stand to see people miserable if I can help it.

Anyone have a mop? I need to get all of this melted-heart goop off the floor before it stains!

Aww.
Genuine moment of heartwarming, there.
‘Course, now I have to throw it back in the freezer – can’t let it thaw out for another few years, yet.

Also, regarding the blog post – I’m curious as to what they have done this time.
I don’t really keep close tabs on them, but it seems like every other month people find some new scandal to condemn them for.

Well, duh. It just occurred to me that this is the pre-movie-quote Brooksie. I suspect the quotes are part of her protection mechanism. Or did I let the cat out of the bag?

Wasn’t the origin of Brooksie’s armor in the very beginning of the comic, at the end of the first day? (Damn you, I just spent the day rereading the whole thing because of that, forgot why, and now had to scan again from the beginning to find this: /comics1/284-odd-little-girl )? That was already under Mike. Or did Steph get canned via Reggie’s connections with her Aunt and that was basically days before the start of the comic, and Jo was only now returning the shirt?

That was supposed to be one in a long line of interactions, originally at any rate, but you’re right. It reads like that was the first time. I’d better fix that. Time to George Lucas this bitch!

There we go. It’s still not totally clear that they’ve been doing this over and over for years, but it doesn’t come across like that was the first time as much as it did.

How old is Brooksie in this little recap? She behaves very young in regular time to begin with, but she seems even more childlike here.

I choose to believe this is a Transmetropolitan quote, when Spider deals with his condition.

Does anyone else think Ed looks like Kili from the recent hobbit movies? Just a thought.

I suspected Reggie had something like this… Also Thomas before he grew a little… Man how sucky is that though, NObody stood up for Reggie, nobody comforted him, never an apology… I’ve felt that, I’m sure everyone has, it’s the worst feeling in the world, when no ones got your back.. It would turn anyone bitter

I love Nina so much! And I kinda feel bad for Reggie.

As for your comment on bronies, my husband still identifies himself as one, and most people are ok with that and understand that he’s not like *those* ones.

Did Brooksie loosely base her current haircut on Nina’s older one?

Yes. In fact, if you look back through the old pages you’ll might notice a pattern to it.