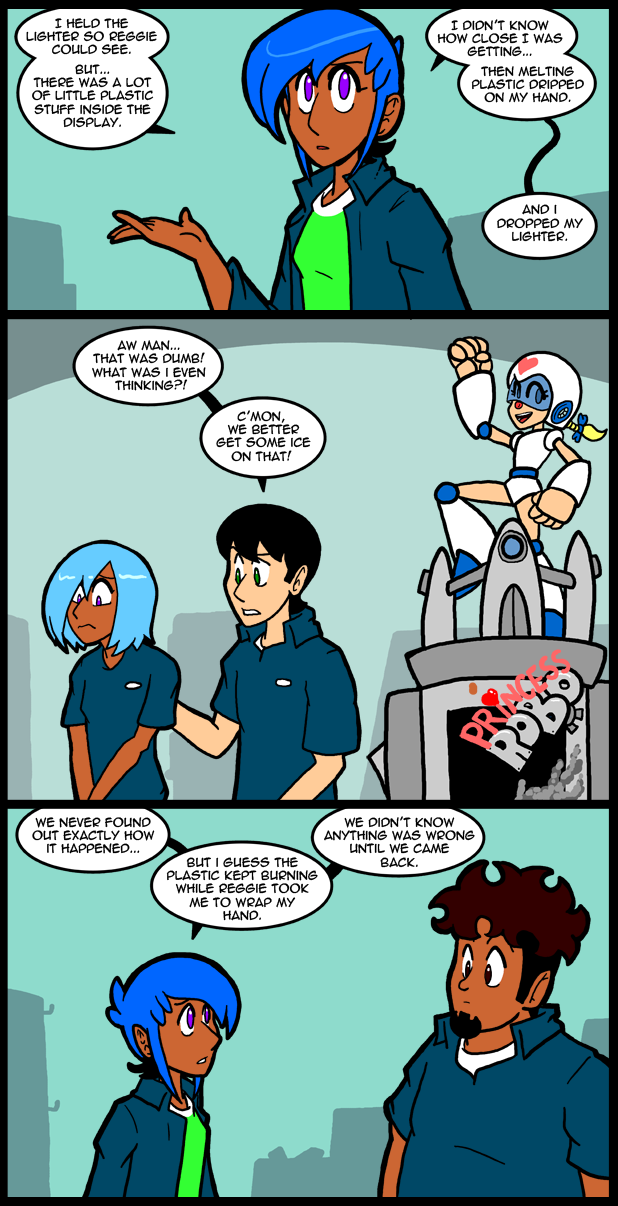 The Teen’s play went well. She did a very good job in spite of being scared. I was very proud of her. I don’t know if she’ll ever want to do it again, but at the very least she tried her best this time.

Her sister stayed the whole weekend, so they had lots of quality sister time. What that amounts to is a mystery to me. At least part of it involved bedazzling jeans.

I spent my time watching instructional videos about Manga Studio while working on comics. I think it makes my lines look much better, but it’s always been too much of a jump for me to use it. I’m thinking about switching over at some point though. At least for sketching and inking. Honestly if I could grab bag features from both programs it would be perfect. I guess the best anyone can hope for is having access to both. I’m using Manga Studio 4 because it was on sale at one point. They might be up to 5 or 6 by now. I didn’t check.

I’ve also been looking in to some sort of mobile drawing solution. I spend such a huge amount of time with the Teen it would really be useful if I could work at the same time. At the very least have images I could easily import into the comic at any rate. I’m just not sure what thing I should be saving for. By the time I have enough there might be some thing else as well… It is a puzzlement.

My knuckle that I bent funny has been hurting. It didn’t hurt when I actually hurt it, after the initial injury, but now it’s sore and swollen. Not sure what that’s about. It doesn’t affect my drawing. I only notice it when I do random tasks like picking up water jugs or what have you. it doesn’t seem broken, but I don’t know what a broken knuckle would be like, so maybe this is exactly how it is. In any case I’ll see if it gets better and ask someone about it when I can.

So Reggie wasn’t the one making things catch on fire then?

Displays like that are always nothing but trouble. And even if you get everything on perfect with nothing catching fire/breaking, without fail someone will come along and steal something off of it.

We always had some asshole trying to buy them so they could sell them on eBay. I had so many shouting matches with people over that shit. Fuck eBay sellers.

I’m about to bitch out an Amazon seller for selling a Heroclix figure without a card or accurate product details. Given I have my gripes with eBay, but at least I get most of what I find in exactly the condition the photo displays. Of course, not all sellers have digital cameras to take pictures with, which pisses me off to no end!

I’m all over that! I’m so tired of seeing stuff in which I might otherwise be interested auctioned (or sold “Buy It Now”) on eBay with either no picture or a phone photo which is so motion- or focus-blurred that it could be either a 1968 Poynter Pogo figure… or a 1978 Stretch Armstrong. You can’t tell which, because this moron still acts like every shot costs them a buck. People, digital photographs are practically free! Take a bunch, delete the junk, and only post the ones that show off your product.

Another peeve is the genius who posts five or ten shots of their wares, all taken from the same angle! No one picture gives you any more information than the rest. Why bother?

The first time I had a play in high school, I was frightened too. It was Romeo and Juliet, and I had decided to memorize the whole “Queen Mab” speech to get the part!

The line memorization helped deal with the stress a bit. That was the first part of it. Also, I realized I’m only going to be up there for a moment when I run my lines, and then I walk away and leave it all behind. After that epiphany, I completely threw myself into the character, and it was like the crowd wasn’t even there.

I’ve looked back, and I must be missing it somewhere, but while I enjoy these ‘teen’ stories, I can’t figure out who she is or how she’s related to you… I’m sure you mentioned it, but I can’t find it. Can anyone help me out.

My cousin. Her father died a little over a year ago and lives with us now.

” Her father died a little over a year ago and lives with us now.” Still believe he’s referring to the cousin. But he could be a medium.

Wasnt there a Master Chief standee stolen by some guys in ski masks and a van at the GameStop?

I forgot about that.

As for your mobile drawing solution, Surface pro, really great machine. basically a full windows 8 (actually works really great on tablets) computer in tablet form, lots of people swear by it, even gabe from penny arcade uses it a lot to make comics on the go. even runs games great, ive happily sat at an airport playing world of warcraft XD if you do decide to go for one i highly recomend the “type” cover over the “touch” cover, much better keyboard.
if you need any more info let me know :)

My only gripe about the Surface 2 pro is the cost. Super nice hardware but I have difficulty justifying the cost for just a tablet (arguably the nicest tablet on the market though)

We will never forget.

At least she got a warriors cremation.

Sorry to hear you’ve torn some connective tissue in your knuckle (ligiment? whatever those anchoring bits are called?). I pray you heal up.

On the subject of mobile drawing, I know Cintiq makes several tablet style drawing pads. I’m not an artist, so I don’t know anything about them, other then they exist.

Well, tell The Teen your audience we’re proud of her. I take it that the production didn’t have any emo vampires (or whatever trips her fancy this week) in it, or she would have been more enthusiastic, but we’re glad she got through it so well.

I recently purchased a new Samsung Galaxy Note 10.1 2014 Edition tablet, which comes with this little stylus thing that works sort of like a mouse. It has a button that acts like a right-click, and it does ‘hover’ activities. Unfortunately, it docks in the side of the tablet, and it’s so short that I get ‘stumpy pencil syndrome’ very quickly. Anyway, I haven’t tried to draw with it yet.

Yea, Manga Studio is on 5 now, I have it, it is a big improvement over 4, about to upgrade to the Ex 5 version. It is a pretty powerful program for the price. You should get it, rather than spending too much time learning 4, just would be more stuff to unlearn when (if) you upgrade. I should mention, however, that the learning curve is still pretty steep, although I heard they are doing a new dummies book for it.

Also, I second the surface pro recommendation. I have heard many webcomic artists are using it with good results. I don’t have one, I use a Cintiq 12, having given up on the Intuos4, would love a 13 but cannot afford it. Cintiq just released their own portable drawing tablet, but it is pricey (as is all their stuff).

And by Cintiq, I of course meant Wacom.

Based on observing my wife with her sister, “sister time” seems to consist primarily of drinking wine.

Oh my god, Reggie took the blame… He’s… God dammit, every time he becomes more decent than I think.