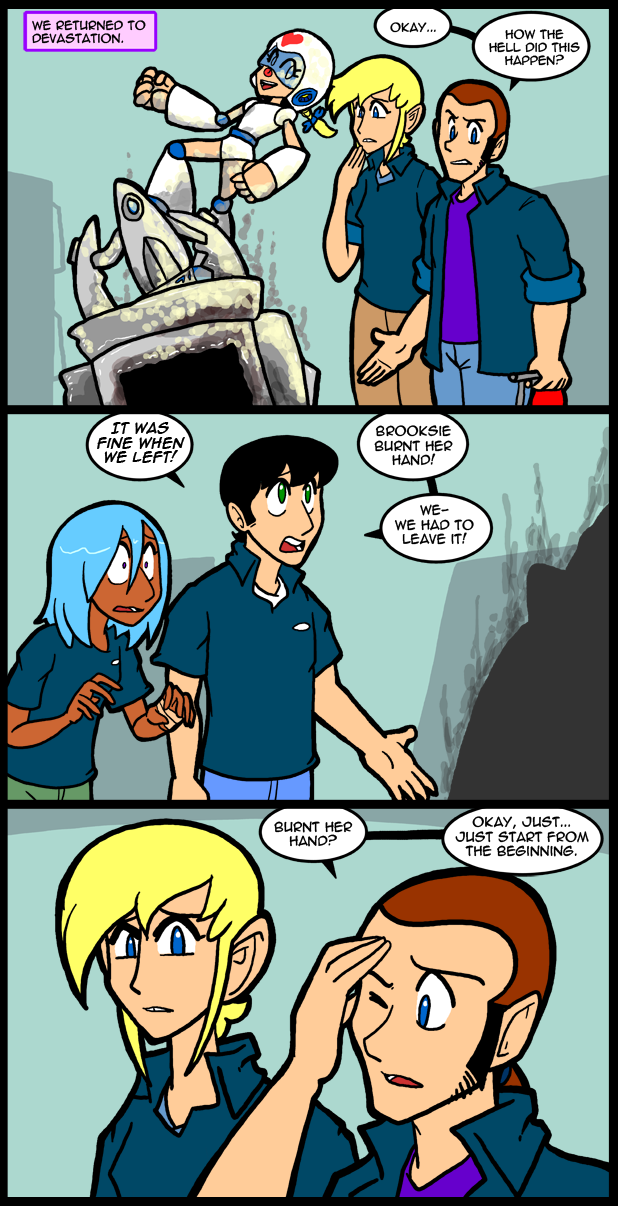 It’s just been nonstop doing shit for two weeks. I really need there to be some calm times between in order to work on the comic effectively. Realistically though, it’s never going to stop. I just have to learn how to become even better at managing my time, working smarter, and trying to do better. If nothing else the extra Patreon money is helping me out. I very much appreciate the extra mile the Patreon supporters are going to. I hope I can do something special for you at some point soon.

The Teen finally tried to read Hellboy, JTHM, and Squee. She did not succeed. She went in with a lot of bravado, but Hellboy is too nuanced and JTHM is too dense. That said, she really loves when I just retell the comic stories to her that I know. I have recounted a Wikipedia of Deadpool information and explained, as best my memory will allow, the Death of Superman story. A story which blew her mind. She made many of the same arguments I remember hearing at the time like “That’s fucking stupid, why would you kill Superman?” and “They brought him back that fast!?” Okay, not arguments per se. Maybe reactions? In any event I don’t actually own the collected Death Of Supes. I have Infinite Crisis. I don’t remember why anymore. No, wait, Crisis On Infinite Earths. Anyway, I’m going to try something a little more mainstream as far as comics go. HB and JTHM might have just been too much for a new potential enthusiast. I guess i’ll see how Long Halloween fairs and just play it from there…

By the way, thanks for the Surface pro information and whatnot. I appreciate it.

Also, are any of you guys seeing the Manga Studio things I post to Facebook/Tumblr/Twitter? Are those doing anything for you? I think inking in Studio might really improve the art quality around here. I’ve been really studying a lot about it.

Wow… I did not recognize Thomas for a sec. Thought he was one of the previous managers for a sec but he looked too familiar.

I do that too sometimes.

I actually won a copy of the collected issues for the ‘return’ of Superman, where they introduce the four Supermen, but never read any of the rest until I was older and found a volume of the collected issues leading up to the death. Way later, I read a novelization of the whole kit and kaboodle (yes, I was the weird kid that read the thick tome version of a comic book story instead of the comic book; I did it with the Batman story No Man’s Land, too). So the Death and Life of Superman is probably the one comic book storyline I could repeat fairly well.

When it rains, it pours.

I tried re-reading Squee! a few years ago as I was purging my collection. I find all the Jhonen V. stuff too bitter now. :/

She’s still OK! A little paint and maybe they can all get together and each one contribute something Thomas can craft into the new display like… We can still do this people!!

Oh, yeah, those new inks you’ve been posting places look great! They’ve got a real subtlety to the line weight, which I think looks awesome with the excellent huge thick lines you use. Very nice!

Just watch the aliasing (jagged pixel-steps around the lines) though… I know nothing about Manga Studio, does it have an anti-aliasing filter somewhere? Maybe an option of the pen/brush tool or something? I think you’re losing a bit of clarity, especially in the faces, because of it. (Well, if you’re working at huge resolution, which I think I remember you saying somewhere you did?, it shouldn’t make a huge difference in the end.)

*cracks YA librarian knuckles* Long Halloween is good but have you tried something aimed a little more towards Teens? The Runaways is an excellent series (The Brian K Vaughan ones anyways) or even some Teen Titans?

Long Halloween is a good choice! As would be Year One. Killing Joke is also classic I’m trying to think of what else would be good to get the Teen started in comics but I’m kind of stuck on Bat side of things with your suggestion of Long Halloween … Looking forward to hearing more about her journey into comics. Keep us posted =)

Check out the Max Landis video on YouTube of “The Death And Return Of Superman”. It’s brilliant.

Totally agree with Squiggles about Runaways. That can be a gateway book, imo. When I was working at a call center with over a 100 people, I brought all my graphic novel collection, and maintained a lending library for coworkers. I found that teen girls loved Runaways, and would come back for volume 2 in a really short time, just an hour or so. I remember one 17 year old saying, “that?s the first book I ever read!”

This comment makes me so happy, you have no idea. That’s amazing

I’m sure you’ve already looked at/decided about the Surface Pro 2, but in case you haven’t, i just bought one to replace my laptop. the main thing about it is that it is a laptop replacement in tablet form. its primarily a small, but surprisingly powerful laptop.
It’s probably one of my best purchases in years, but i only have 2 complaints: 1) apps are fewer and further between because its a laptop, and windows store is generally forgotten by those who make apps, and 2) the screen is a little small, but i think that has a lot to do with stepping down from a 15 inch screen on my old laptop. id buy it again in a heartbeat (and several weeks pay). Oh, and go for the larger memory or get used to using microSD cards as CD’s (or really tiny floppy’s)

finally, love the comic, first time poster, long time reader. It really speaks to me, especially sharing a name with the main character!

Is robo princess supposed to be a parody of megaman?

Essentially. It’s like if Tetsuwan Atom and Rainbow Brite had a baby.

One of the first proposed names for Mega Man (in Japan) was The Battle Rainbow Rockman.

I do see the resemblance to Mega Man. Having been exposed to Kikaider, Cyborg 009, Astro Boy, and other such anime and games, I was able to spot different nuances that didn’t specifically say “Mega Man” to me.

I’ve been seeing the Tumblr stuff you did. I don’t know if it’s because I can spot the nuances in Manga Studio, or if it’s just me having the veil torn off of the mystery but it’s hard for me to say if I like them better. Ultimately I’ll get over any minor art style changes so just do what’s easier for you.

So clearly he is Lupin.

Yeah, things never stop happening. It is part of the nature of life.
Lately I have been reflecting on some eastern thought on that.
Resisting what is actually happening is the source of suffering.

I look at it like this. Any time I spend thinking about how much I have to do, or how I wish my I was spending my time doing something different is energy I am wasting on self inflicted suffering. What I am trying to do is worry about it less, and just do the work in front of me. I find it way less exhausting and overwhelming that way. Then I have much more energy when I finally get around to the things I really want to do.

Maybe not very helpful? But reading your comic and posts is one of the things I greatly enjoy about my day. So thanks man. :)

Glad to know you appreciate them.

Okay. How did Nina grow her hair out so fast? Already full and down to her butt in only a couple of years? Impressive!

I let my hair grow for a year. It was really impressive for a guy, but I didn’t get too much below the back of my neck.

Then again, my hair is curly. I got a few jealous compliments from a couple of Asian women.

Is that really impressive? Maybe I’ve come in contact with abnormal women in my life. And I can have a ponytail in a few months… And braid my beard.

A healthy diet, regular trims, good hair care, and decent genetics all contribute to long hair. It’s not to impressive, just not common, even for women.

About the Death of Superman… At the time the books weren’t selling well. With the new Image stuff coming out, a lot of folks seemed to think that Superman was outdated, and that he needed to change.
The Lois and Clark TV show was popular at the time, and Warner Bros and DC decided to time the wedding of the two to happen at the same time in the comics as in the show. This left DC with a big gap in their storyline, so they decided to show what a world without Superman would be like.
Each of the four ‘New Supermen’ were based on one of Superman’s monickers, ‘The Man of Steel’, ‘The Metropolis Kid’, ‘The Man of Tomorrow’ and ‘The Last Son of Krypton’. And each of them were based on what fanboys kept complaining that Superman should become. There’s even a point in the story where the real Superman is in a black outfit firing guns, and yes people were saying that Superman should go that way, because many of the Image characters were as well.
I really think that the whole point of the series, other then to boost sales, was DC trying to say ‘See? Not as cool as you think, huh? Want the original back?’

As for other comics, one suggestion might be Justice League. You’re not going to go wrong with the Animated series, especially JLU. But the run that Keith Giffen and J. M. DeMatteis and Kevin Maguire did after the original Crisis is a really fun read. Grant Morrison’s run starting in 1996 is amazing, but maybe not a great place for a newcomer to start.