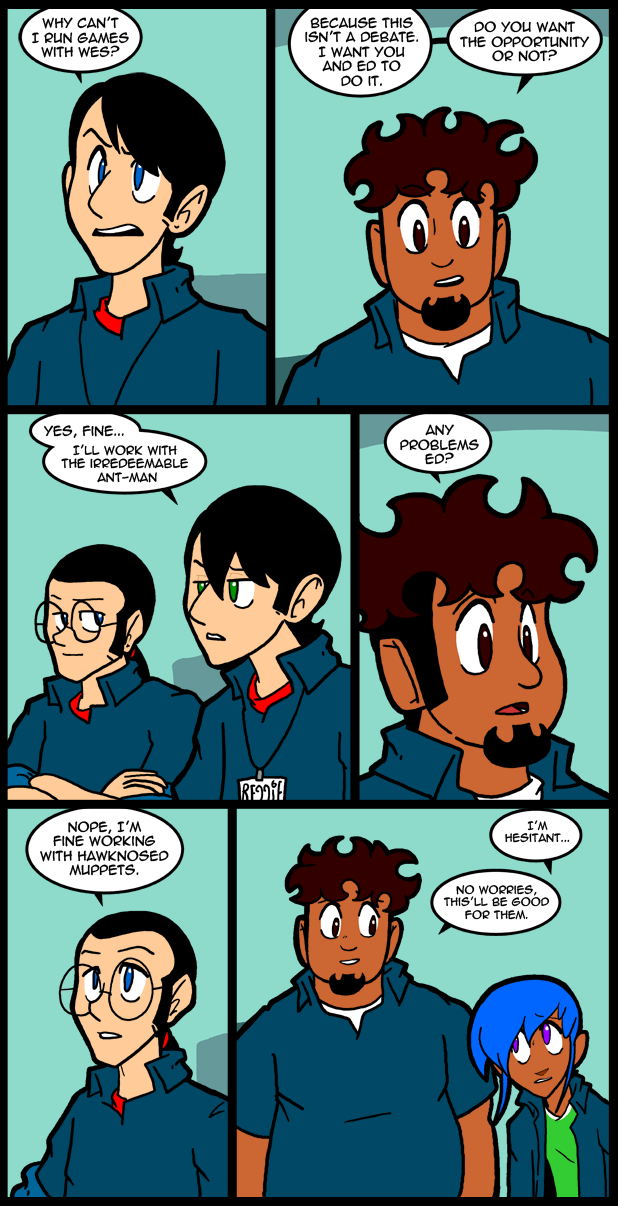 I was getting up off the floor the other day and my hand and arm suddenly stopped working. My right hand. I bent my fingers almost to the back of my hand, but it all just kind of crumpled and I fell back over. Of course it hurt like a bitch too. Ultimately, however, it didn’t appear to do much actual damage. It swelled very little and wasn’t sore after an hour or so. It didn’t actually start to hurt until a day or so later. Now it feels bruised. I can still use it, it’s just sore. How I managed to do what looked like massive damage and walk away with irritating soreness is beyond me. Maybe it’s just tough from all the drawing?

I got an extra cord for my Wii, since the WiiU didn’t come with the right kind, and set it up in the Teen’s room. She likes Mario Brothers a lot, specifically the first one for the Wii, so it’s access to a set of games I’m done with, but are new to her. We’ve been playing Mario Brothers from the beginning again. It’s a bit of a let down from Mario WiiU, but she’s happy, so whatever.

Anyway she wants me to come watch TV so the monsters don’t get her, so I better go. Later, guys.

I tried to get her to play Animal Crossing, but she just doesn’t have the attention span or hoarding instinct for it. That’s probably for the best really, but it would have been nice to experience the game through someone else for a change. Potentially she has access to my Gamecube library as well, but I’m not sure any of that will interest her either.

Give her a big stick so she can separate them if they get rowdy.

Or a ninjo camera, for purposes of blackmail.

Oh, you mean Brooksie and Lincoln & Boothe. For a minute there, I thought you were talking about The Teen and the monsters.

So yeah, I don’t like the sound of this. I don’t trust Wes very much, and I sense this will somehow lead to dangerous things from that general area.

First comment ever, and all I have to say is: “why are Reggie’s eyes blue in the first pannel”?

Naw, I’m kidding. Also gotta say you’ve got a fine webcomic going, Crave. I’ve been Reading it for a while now, since little after story arc II (and coloring) started. Although I can’t say for how long that’s been, I think the fact I’m still sticking around speaks enough for my appreciation of what you’ve been doing :)

Ah, I must have chosen Thomas’s color on accident. I’ll have to fix that as soon as I can…

Anyway thanks for pointing that out and for sticking with me this whole time!

Mike finally put his foot down, I’m so proud.

Screw the comic (no offense!), you sure your hand’s okay? I mean, that’s a sign of a stroke, among other horribly ominous things!

I think it’s the left hand for strokes.

Could still be a blood clot issue, which could lead to the other horribly ominous things mentioned…aaaaaand now I want to pester you to go to a doctor…..

Left hand for heart attacks. Strokes are not side-specific; they affect one or both sides of the body, depending on which hemisphere of the brain was compromised.

I was under the impression that hear attacks were commonly associated with sharp pain in the upper left arm/left elbow pit area.

Yes, they are; but the subjective location of the pain can be anywhere from the lower left abdomen (opposite from the appendix) across the shoulder, down the arm to the hand. My brother-in-law’s father said his first two heart attacks felt like someone had his left wrist in a vise (he hasn’t mentioned the third one in the 30 years since it happened).

Well, at least it isn’t Carol or Tom. In fact, this will be excellent practice for Brooksie’s leadership skills and sense of assertion.

Does this mean Wes is going to have other duties?

I’m dying from the adorabubbleness that is Brooksie.

I don’t see why everyone predicts tension between Lincoln and Boothe. Perhaps they will bond on some of their shared interests. For example, they both worship the ground upon which Nina Grace walks.

Um, mayhap that was a poor choice of example…

Probably because a lot of people read “you two will run the department together” as “you two will be working at the same times as each other in that department.” Much like Reggie did.

But if this works anything like the stores I’ve been familiar enough with to know their management structure, what Mike just said was, “Ed, Reggie, this is your last scheduled shift together for a long time.” Of course, Reggie’s an hours whore, so they’ll work together some during Ed’s shifts, but Reggie will have a different temporary assignment then. Ditto for any extra hours that Ed works, except that it’ll be Ed with the other temporary assignment.

Except, of course, web comic, so it’ll turn out the way it turns out, and everyone here but me knows how already because I’m the Johnny Come Lately.

Crave i’m pretty sure the worst will be behind you, what you refered to sounds a lot like sporting injurys, don’t hurt as much till the next day when they kill.

But it never hurts to actually get it checked out, if the pain keeps going for 2-3 days i would seriously suggest getting it checked.

Never realized how small Jo is until now. She’s like a little ferret.

She should hang out with Beastmaster!

It’ll be good for them only in the sense that one of them will be put out of the other’s misery.

It actually speaks very highly of Reggie’s nerd cred that he knows “The Irredeemable Ant-Man.”