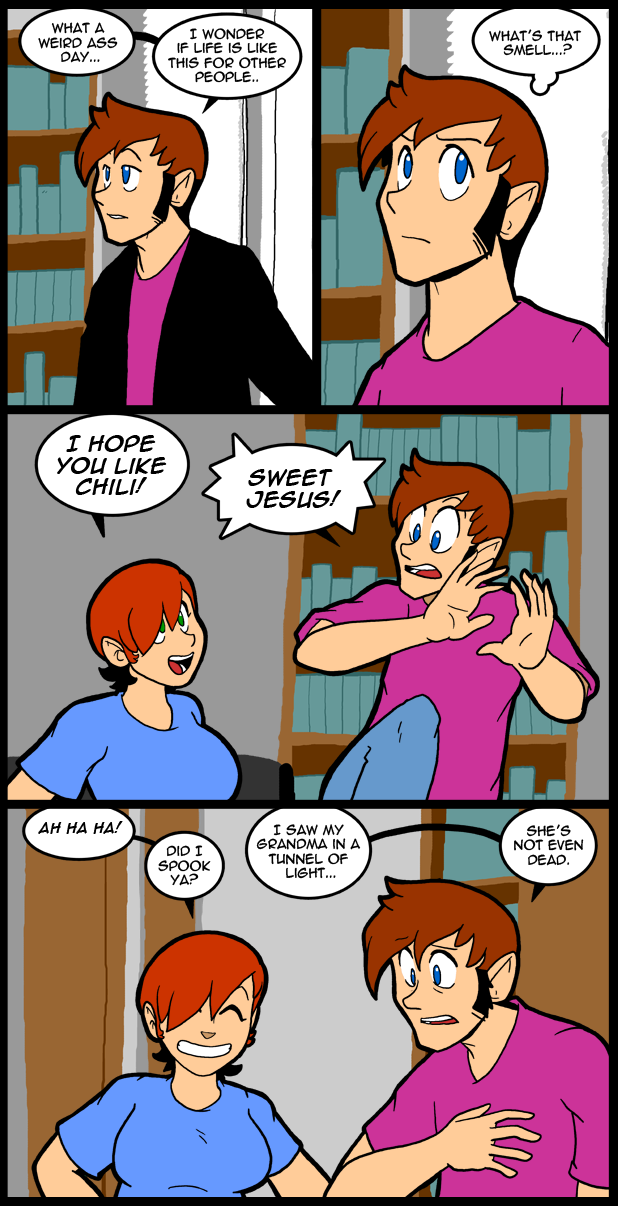 To the various people who have made inquiries about gaming stuff I’m getting rid of I apologize. Since it’s in messy piles I’m not exactly sure what I have, or don’t have at the moment. Dreamcast games I can think of include Dead Or Alive 2 (Possibly), both of the Sonic Adventures, Legend Of Lodoss War, and Time Stalkers. N64 games include a handful of WWE games, Beetle Adventure Racing, Ogre Battle 64, Hey You Pikachu, both Stadiums, and others. That includes all of the tidbits that goes with the games too, like the mic and connector packs. Some of the games even have boxes and instruction books. I’m fairly certain there are also spare N64 controllers. They are in unusually nice condition, as is true of most of my stuff. Anyway, I’ll try to get a complete list of all this stuff as soon as I can.

This weekend was… interesting. The Teen has a lot of Valentine hang ups. On the one hand she hates it and wills herself to have a terrible time, while on the other she begs for, and perpetually mentions, how much she wants presents. It was very strange watching this tug of war play out. It was like a mini version of how she lives every day basically. Constantly wanting attention and validation while simultaneously doing everything in her power to stop herself from getting those things. I can certainly remember being that way myself, but it’s strange to watch it happening so close up. I wonder if it was this obvious to my parents when I was a kid. It must not have been, or I feel like they might have made some different choices. They certainly didn’t recognize my depression for what it was. Or have the tools to deal with it at any rate. Now it’s all about therapy and pills. Not for me, but in general. They aren’t opposed to them like when I was young, because practically everyone we know is on something, or has been at some time. In any case it’s pretty clear that the Teen has the same kind of highs and lows typical to our family. it’s a hard time complicated by unfortunate events. I had trouble dealing with a fairly limited range of disasters, it must be a lot harder for her.

I need to ink the last page for the week, and color two of them. This cleanup nonsense, and extra wandering around, has screwed up my whole week. It’s also got me sleeping at weird times. I want to go back to bed even now, but I know if I do I’ll wake up with a headache. I was hoping that if I gave in that I’d wake up ready to go, but that was not the case. I’m just going to have to do my best and see what happens. At least tonight’s page came together okay. Maybe I can get one of those triple hokey things I forget the name of.

“My life flashed before my eyes! It was really boring.”

YES! The one other person in the universe who has seen Chicken Run! *high fives*

I have the DVD, thank you very much.

I also have the DVD!

One of my favorites. If you like “Chicken Run,” you’ll love “A Town Called Panic.”

Well, I have to say, A Town Called Panic is definitely not in the same class as Chicken Run, although both are distributed by Aardman. That said, just a single episode Panic provides your Minimum Daily Requirement of strange. LMAO!

No no no, I mean the movie, not the show… I’ve seen a few of the shows, but I was introduced to it from the movie.

“We’ve got to save the chickens!” Also, fish oil is supposed to help with mood swings and ADHD. Just sayin.

I only saw Chicken Run once. It was at the theater.

Does that still count?

Weekend updates? What is this madness an can I have some more?

This is Monday’s update. They always go up at midnight Eastern.

only if you live in ‘merica, over in ausland it’s a midday update, not complaining though, this stuff is worth the wait.

She’s going to drive him to an early grave at this rate.

It looks like she has plans to drive him into a Graves later on…. repeatedly.

Be proud of this comic, I read about 800 pages in a day and caught up, i love everyone in it and hope that reggie stops being such an asshole one day. Although his character seems a little unrealistic, someone I know exactly like him wouldn’t take even the smallest bit of advice or mental manipulation to be a better person lol

So, hey. Don’t usually comment, but I thought I should give you a heads up that your video game collection may not be as valueless as you think. Ogre Battle 64 is, I believe, fairly rare. I recall that Record of Lodoss War had a low print run, as well. I’m not up on market prices or anything, but I think it may be worth your while to do a little research lest you get low balled.

She scared him so bad his SHIRT disappeared! ^_^

You mean his jacket which he took off after getting in the door?

My chili must be able to stand up to a spoon (or a Bowie knife). Hmm… ground Bison (yeah, Buffalo meat — expensive and hard to find, but so worth it), sometimes ground Turkey — and Chorizo! Diced canned jalapeños, canned diced tomatoes, one can each of dark red, light red, black, any light beans, and one can of chick peas; diced onions, green bell pepper and red bell pepper; garlic, cumin, dark chili powder, light chili powder, crushed red pepper, dash of cinnamon, Worcestershire sauce, lime juice…

If I came home to a similar redhead with or without chili, I’d be happy, but if the chili has red peppers, I’m going to be veeeeery poor company later that night.

Meh. That’s why I use Red Bell peppers — very similar to Green Bells — no worse for the exhaust.

I read things like this and realize how lucky I am to live where I do. Our bison is pricy, but easy to get.

Yep. Love living in this state with lots of bison. I looooove bison meat. So tasty. And, thanks to Teddy Roosevelt making it a crime to poach them, we still have them. :D I think the numbers dropped to something under 600 at one point before he passed the legislation. Not sure. Am rambling.

Up here In Canada, people just farm them like cattle. But yes, yay bison!

They seem v to be sharing skills as of late.

Spicy chili and a spicy redhead, what’s not to like. The question being what should Thomas eat first?

I think that given the known effects of capsaicin on mucous membranes, it could be _very_ important to get that order right …

The Lodoss Dreamcast game? I would be intregued by such a thing. I played the demo for a while and it was kind of fun for a diablo clone.

I had it for a bit. I wasn’t ready for a Diablo clone JRPG, so I didn’t get very far into it.

I never gave the game another chance after that troll.

So Brooksie’s giving a little sass, and Carol’s got a stealth mode.

I wonder what was in that ice cream?

A concoction of personality swap potion, I believe.

Wow. Great observation — that got under my radar, somehow.

No wonder you want to get rid of your N64. If those are the games you have, you have literally NONE of the games that would change your mind. Super Mario 64 ,Mario Kart 64, Smash Bros., Zelda OoT, Zelda MM, Kirby 64, Donkey Kong 64. Banjo-Kazooie and Tooie. Star Wars Shadow of the Empire, Rogue Squadron, and Battle for Naboo. Buck Bumble. Battletanx. Clayfighters 63 1/3. Your list is (IMO) a sort of epic fail list.

I do have most of those games actually, but they are almost all available as downloads or have updated versions, they also don’t live in the junk pile, so I didn’t list them.

AHHAHAHAHHAHAA this page is the best! Don’t know why I didn’t comment last time I read through, but i’m 90% sure it’s because I was laughing too hard to type. :D