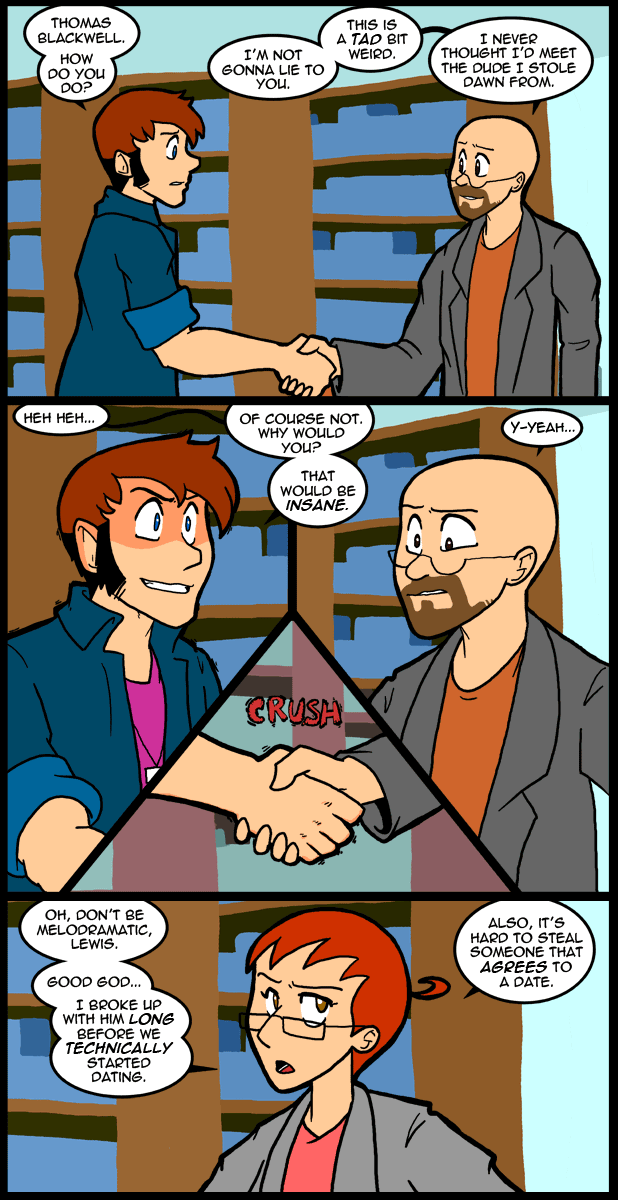 Apparently Dawn chose her mate based on a shared ability to say the wrong groupings of words at the right moment.

I was out getting the water for this week and didn’t get back in time to post the story into the blog, but here is what I managed to get done:

Back at the camp the others were beginning to stir. Alina opened the door wide, allowing the green hued light to penetrate the room. No one looked very pleased with the situation. Herrin seemed to be the least affected having, doubtlessly, been sleeping much of the time he had been trapped. He scuttled over to the supplies and busied himself with helping Alina prepare some food.

In spite of everything they’d experienced Niona woke up smiling, which offset Regalius’s sour mood. He set himself apart from the group, with a little pile of the remains of his violin, and began to tinker. His mumbled curses punctuated with the sounds of whittling.

Twig woke up looking horrified that Julius wasn’t near her, but managed a save once she realized that he was in the room. After that she began warily observing Regalius’s machinations, her observation eventually evolving into wide eyed staring, which he took no obvious notice of.

“Herrin,” Julius began. “Did you do any exploring while you were alone?”

“A little,” He replied. “but it was hard to go far with my injuries, and I don’t know traps. All of the rooms near here are empty as far as I could tell, but I didn’t go in any. I only used this one because I knew it was safe.”

“I’m still not convinced that going forward is the best idea.” Julius offered. Everyone looked at each other. “Do we have enough supplies to make it back?”

Niona poked around in the bags for a moment. “Well, we’ve added two members, but Herrin had most of his party’s supplies… So we can make it back with a couple of days to spare. As long as we’re careful.”

“I don’t intend to order anyone to go forward who thinks it’s a bad idea.” said Alina, “What say you all?” No one spoke for a long while.

“That’s good enough for me then.” Julius broke in. “As long as we’re still prepared.”

Not trying to nitpick, but I think it should be “broke* up with him…” unless she is trying to use like a cutsy lisp-like girly speak…

Nope, just a typo. Although I think boke is a Japanese word.

Wow. I was under the impression that she cheated on Thomas.

That’ll teach me not to jump to conclusions.

Technically nothing in this says that she doesn’t, but yeah. I’m still looking for another reason for him to hate her. Assuming he has one.

The fact that she says “technically” is not a good sign.

Me thinks that Thomas has so serious issues.

Wow, hey, another wallpaper idea – Thomas with “Young Einstein” hair, and with the same “I’m going to hurt you” look shown in panel 2

Lewis is going to need an ace bandage or a cast after that handshake.

Well… how long is “long” exactly?

I mean, if Dawn broke up with Thomas and then jumped right to Lewis or dumped him so she could get the chance to be with Lewis without technically cheating…

That still translates to leaving Thomas for another man. No matter how many angles you look at it. I can see some lingering pain over that.

Hell, the term “technically” tells me it’s probably the latter. That Dawn was emotionally detaching from Thomas and showing interest in Lewis probably inappropriately. So she decides she’s more interested in guy number 2 than guy number 1 and promptly ditches first guy to be able to pursue a relationship with second dude properly.

At least, I assume. I could be wrong. We’ll find out one way or another. All I know is I want Carol to stop chatting with Brooksie already and get there for support. If not her then Nina but one of his girls, please.

Agreed…
on all counts.

Its the word technically that bothers me the most here.. Like she was fooling around with the other guy or something but they weren’t technically together…. I am sensing shadiness…. She even puts stress on it…

Be wary of the wording.
Specific wording led to several “well, you said not to hurt him, so we killed him painlessly in his sleep” incidents.
By a technicality, I can claim descent from several European thrones. Does that make me next in line? O’ course not. So, “technically” can be loosely translated to “maybe I am, maybe I’m not, I don’t give a single fuck”.

Maybe they are magical disappearing reappearing glasses like the ink in who framed Roger Rabbit.

They magically appeared in the third panel of the previous comic and then disappeared, I just went and checked.

They’re Blink spectacles. They only appear when you need to see something.

They first appeared when he was looking at Thomas. When he realized Thomas might be a threat, the glasses blinked off, sensing the danger.

I too am going to say she cheated on Thomas with Lewis, broke up with Thomas, laid low for a bit, then started officially dating Lewis.

That way, if anyone asks, she can say she didn’t date Lewis for a while after breaking up with Thomas, putting her in the clear. Exactly like she does here.

She ends up with basically no blame as far as anyone who’d hear the story is concerned, with only the three of them knowing the actual details. And if Thomas has anything less than photographic evidence of her cheating on him, him SAYING she cheated on him rings hollow, because of that grace period after she broke up with him.

Nah, cheating would still be cheating, regardless of a grace period. I think the accusation would ring true regardless – IF he knew first-hand of her affair. If Dawn spent time pretending not to be with Lewis for the sake of stepping through certain hoops that make her feel like she closed things out with Thomas properly, that’s fine for her, but doesn’t change cheaty-ness.

If he suspected, but she never confessed, then yes, I agree with your scenario completely.

I think Lewis’ “admission of guilt” is the most telling point. He appears to think he stole Dawn from Thomas; he probably has reason to think so. In my experience, that’s not really the kind of impression you want to leave an ex with (hey, I stole your woman!) unless you’re acknowledging something you think is really true. If it’s not true, even if the people have all moved on in a healthy way (unlike Thomas), them can still be fightin’ words.

That face Thomas is making…. that’s a thing. That’s a face I didn’t think I’d ever see on him. That’s the kinda face I make when I get a random weird or disturbing thought. Definately eerie.

I’ve been in school for too long. I see a DCBA code, and am expecting the 7-segment display to display blank, which is digitalese for 15, or F.

Yes. 1,111 pages is pretty cool. I’m rather impressed with how prolific and consistent Mr. Crave is.

Kind of interesting that he spends so much time trying to be the mature, exaggerated vocabulary type with the deep thoughts and meaningful messages.

Then when his ex shows up he turns into a 13 year old boy.

I half suspect he called Ed’s sister to come over to pretend to be his girlfriend because he wouldn’t want Carol to have to do it and feel awkward, where as Ed’s sister is all about awkward situations.

I don’t know, it seems like there’s an implied emotional affair that Dawn had with this guy while dating Thomas- given what we know of her personality, probably some online-only, “fall in love before we’ve actually met” sort of deal…

I broke up with him long before we technically started dating.

Hmm… That just reeks of an online romance.

I agree with most of the above statements and mostly wanted to post to say the following.
Yeah, she wasn’t thinking when she told Thomas to meet her husband. This is definitely going to blow up in her face. Whether Thomas does something stupid or someone else does something stupid, it is going to explode….HIT THE DECK!

Actually, now that I think about it, this kind of thing has happened to me. It was so long ago, I pretty much forgot about it.

It was in high school, anyway. She was acting kind of weird at the end. (I was kind of distant, though. Can’t really blame her. I wasn’t really mature enough for a girlfriend.) I didn’t want to break up with her, but I thought it might be the better way to go, so I did.

Wasn’t a week later I saw her kissing another dude in the hall.

I never knew for sure if she had already been spending time with him before we broke up, but I strongly suspect that was the case. Last I saw her, she was madly in love with some other guy she was dating. I found out later that she had married him, and had a baby about 4 months after that. This was back in 1998. Old history by now.

I read: “That would be insane.”
Remembered how Dawn suggested Thomas come meet the guy.
Thomas is basically giving a friendly, if belated, warning to the new guy of his ex that she’s not all there.

With some handcrunching for emphasis.
Perfectly acceptable behaviour, no?