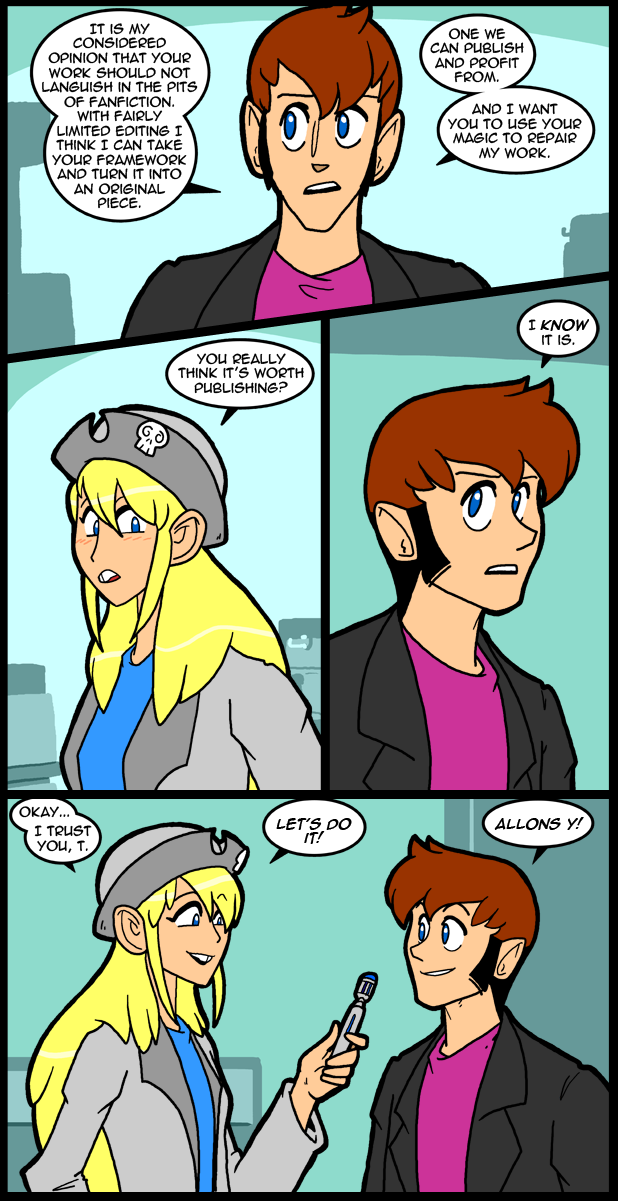 And so begins the dark union that will eventually destroy their lives… Or whatever.

A fan took pity on me, or perhaps was tired of my constant whining, and sent me Fall Of Cybertron. Apparently it is almost valueless as a trade in. I can’t say I’m surprised. It was like that when I was working at Gamestop. Those big titles lose trade in value at light speed. Of course, they gain back all that lost value in the time it takes to stick a price sticker back on them, but that’s a whole other matter.

I only played it long enough to make sure it had survived the trip. (The inside of the case smelled like the magical land of Canada. Or at least one house there.) I died 3 or 4 times in the first 2 sections. Even when playing carefully I am terrible at these kinds of games. The more frenetic the area the less I can tell enemy from structure. Much like when I tried to play Bayonetta everything just sort of fades into a haze of shiny eyenoise. When next I venture back to Cybertron I will have to move more cautiously. Investing in some HD cables for my 360 would probably be a good idea too. I can’t read the screen text for shit.

After locating some batteries I was able to play Skyward Sword for a little while without it telling me to change them every few moments. The battery warning for that game is the most intrusive of any game I’ve ever played. I had fun doing the opening quest. The controls worked just fine for me, except for thrusting. It seemed to get confused when I did that. Maybe I’m not holding my thing right. Anyway the game is super pretty. I love the painted look of it all. I’m not sold on the series’ intense desire to make other characters look like derp monsters, but that’s been going on for ages and apparently isn’t going to change. Also, I have to say, the fact that you know that Zelda is going to get kidnapped IS getting kind of old. It would be cool if they shook things up by having her go with Link, or having her own quest that you can play, or something that isn’t such a cliché. They keep almost letting her be a hero too, but never quite commit. Maybe all this feminism in video game talk is affecting me. I’m not sure.

In a related subject, I’d like for Princess Peach to be playable in a Mario brothers game again. I mean, Bowser can have other goals. Or maybe next game Wart comes back and Bowser helps the brothers fight him in a side scrolling adventure. I’d kind of like a Metroidio adventure where you can switch between Mario, Luigi, Peach, Toad, and Bowser. That would be cool, right?

I am posting this from the past….. according to your update.

My day:
Tired. Out of ideas. desperately trying to come up with something original.
Give up, work on fanfiction… feel like wasting time…
Hey Webcomix update soon. First line read: “It is my considered opinion that your work should not languish in the pits of fanfiction”
Oh Universe, you’re so silly

He’s got the Hair to be the doctor. He just needs to wear glasses that he doesn’t really need.
Nina and Tom could cosplay as Ten and Rose and I would love it forever and ever.

YEEESSSS progress at long last, what I’ve been hoping for since I started reading this webcomic :D

Need we remind you that fanfiction-with-the-serial-numbers-filed-off is what brought us Fifty Shades of Grey?

On that scale, well written fanfiction based on a well written book (provided it’s not 6 or 7) should provide BILLIONS!!!!

Wmphasis on should. Anybody interested in a furry/X-Files crossover fanfic? It was good for a few laughs ten years or so ago…

“except for thrusting. It seemed to get confused when I did that. Maybe I’m not holding my thing right.”

This made me laugh! Apparently, my mind is deep in the gutter even upon first waking up!

2d That can result in all manner of problems.

Sigh. I wish I had an awesome friend who would trade fanfiction with me for editing purposes. The last time I edited someone’s fiction, they got all offended and said the grammar errors were supposed to be part of the “tone”.

They said what? That … that’s just terrible.

Yeah, I love editing and I’m a very good copy editor, but apparently I was just supposed to be reading and providing feedback, not actually doctoring what was a very rough draft. I understand that I got the wrong impression, but damn, poor grammar is poor grammar anywhere. I think the person wasn’t expecting any mark up and just jumped on the first defense for their poor grammar that they could think up.

I don’t know man. Nintendo hasn’t exactly been, shall we say, very PC when it comes to Peach lately. Just look at super princess peach, instead of getting abilities and attacks like Mario, her’s were emotion based. Then there’s SSBB that made her attacks frying pans and butt bumps.

Now if they did it like the memebase picture of peach that’s going around of her dual wielding the turnips from the US SMB2, fully geared up and ready to lay the smack down on one of those chomping plants then i’d think it’d be a cool idea. But as long as Nintendo is being, well, Nintendo I don’t think it’ll be very enjoyable.

Okay, I dropped Doctor Who a long time ago, but I am so full of nostalgia and I really want to watch it again!
But I have exams…

I have no time, and I must binge!

Why not? This is basically how [i]50 Shades of Grey[/i] happened.