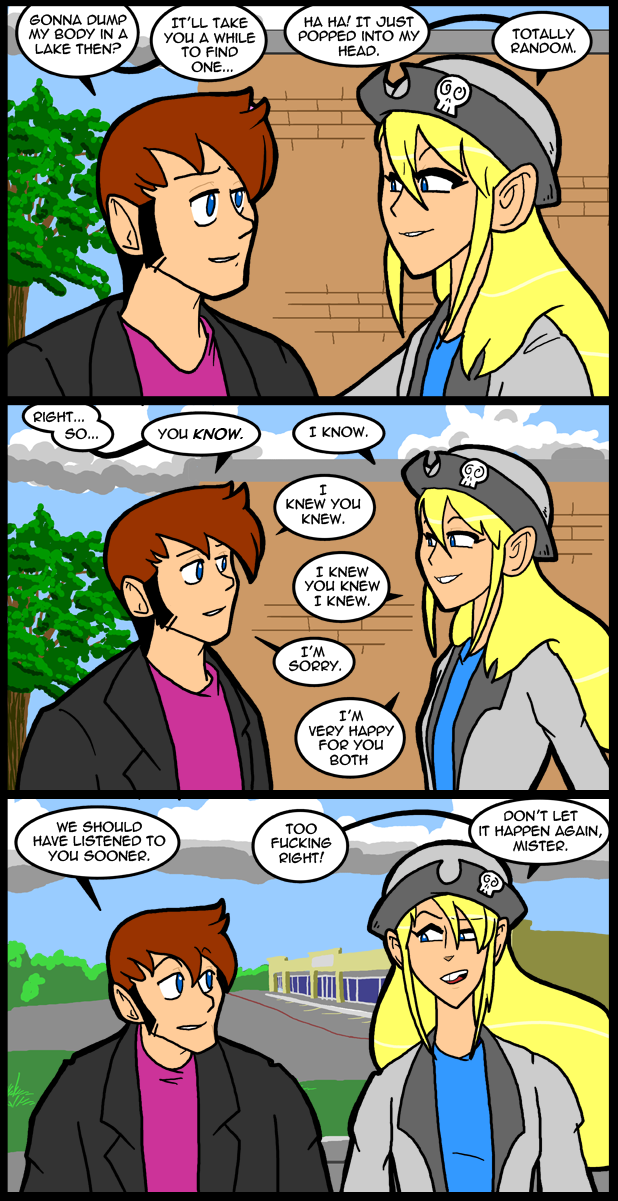 I’m not going to pretend that the confusion caused by the last page wasn’t entertaining. Especially since all it amounted to was Nina being silly.

When I started writing the comic I thought that John was Thomas’s best friend. There is stuff to support that idea, but over time I began to realize that he probably isn’t his BEST friend. He’s a close one to be sure, but Nina is actually Thomas’s best friend. Of course the idea of best friends is kind of childish, but so is Thomas, so whatever. They are very close and have a relationship that is alien to me. I’ve never been good at being friends with girls.

I found a clearance copy of Red Dead Redemption and decided the price was right to finally try it. I only played enough to get the feel of the game, because I have things ahead of it, but it was clear from the off why the game was, and I suppose still is, so popular. I’m actually struggling with some of the controls, particularly with horses, but I can see I’ll enjoy the game a lot once I actually let myself get invested. For now it’s on the list.

I have almost played Fire Emblem Awakening enough. I’ve very nearly created the perfect save, so to speak. At least as far as the male avatar is concerned. I almost married Say’ri since she has no other supports particularly and I felt bad for her, but I ended up going with the character I actually most like (Apart from the female avatar.) which is Noire. She’s just too adorable and insane. Which is probably why all my relationships end tragically…

Anyway, I may give one more go with the female avatar just to get all my shipping sorted out on that side. I made some errors I feel like I need to fix. If nothing else I’m getting my money’s worth out of this game and then some.

They really should have. Now let’s hear her next piece of advice on said book target.

Damn you! My heart was racing when I went to check this! Curse you! Side note, Tharja and Avatar are the best.

Your depiction of a happy, platonic relationship between a guy and a girl is pretty much dead on. I get the easy sense of mutual attraction, but lack of motivation to take it to the next level from Thomas and Nina, similar to some of my strong relationships with the opposite sex. They just get along SO WELL, but without that spark that Thomas and Carol have to turn it into romance, and they have each other’s backs.

Carol is great, but she’s definitely got the personality of fire – warm you or burn you. The type you’d certainly never want to scorn, because forgiveness probably isn’t an option (unless you try really, really hard to make it up to her). Nina, on the other hand, is more of a peacemaker and desires people to have joy, hence her matchmaking with Thomas and Carol.

In the Demo provided on the page, there is a girl that looks INSANELY close to Jo. 0.0

Insanely close to Jo? Why? Because she’s small and brown? That’s so racist. I suppose all small brown anime esque girls look the same to you… That girl doesn’t even have a nose. Jo is unique because I decided she needed enough nose to make up for all the characters who are denied nasal excellence.

Hmmm… I’m with you on the nose thing. I love Jo’s nose.

I don’t like the anime girl’s mouse ears, however, her stature could call Jo to mind.

Oh you clever, glorious bastard! And as far as relationships go, cute and insane is a personal favorite … and regretably doomed to failure.

“I’m not going to pretend that the confusion caused by the last page wasn’t entertaining. Especially since all it amounted to was Nina being silly.”
If I made a webcomic, I’d pretty-much have to prank my audience with things like this. :D Trouble is, me being me, I’d probably take it too far.