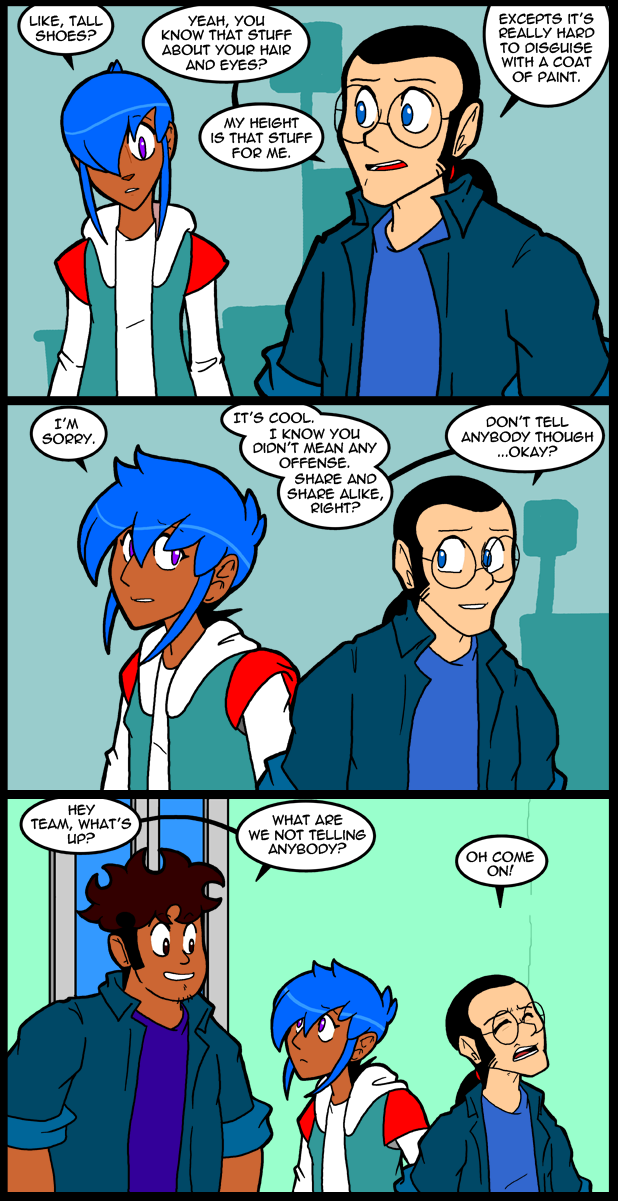 The other day, when I was in Garden, I parked outside the Gamestop to download the newest Pokemon Nintendo was making us chase and some dudes wandered over to the people carrier I had parked next to. They opened the hood and started rooting around a little. One of them was trying to clean the battery leads with some kind of card, which wasn’t going well. Since my truck has been having some minor issues I had my tools in the front seat with me, so I rolled down my window and asked if they wanted to borrow them. The mechanic asked if I happened to have a metal bush and, much to his surprise, I did. After a few short twists of some pliers, and some scrubbing he had the issue sorted out, and the vehicle started right up.

I know that it’s confirmation bias, but this sort of thing seems to happen to me way more than to other people. I just happen to be at the right place to be handy. I mean, there are certainly worse things to be than usefull, but it has always struck me as a little odd. Maybe it just comes from being prepared for minor disasters.

I’ve watched a few more episodes of Super God Masterforce and have to say it’s a better show than Headmasters. It’s still basically Power Rangers, but the disinclusion of Daniel and his constant, shrill, weeping really improves watchability. They finally worked things back around to being connected to the Headmasters series. The 3 spunky youths were given special bracelets that allow them to become Headmasters when paired with transectors of their own.

The decepticons have recruited 3 youths of their own and also began using zombies to wreak havok, in addition to their arsenal of seacon drones. In this continuity the arm, leg, and gun, parts of the Seacon combiner are lifeless robots, rather than unique individuals. Only the main body, Turtler, is sentient. It kind of reminds me of the combiner sets they released a year or so ago that had a single Transformer and 4 drones that became limbs for a combned form. The advantage to this, at least as far as the fiction is concerned, is that there’s no conflict between the minds of the gestalt parts. Bickering between personalities is what made most of the decepticon combiner teams ineffective when compared to similar autobot teams. SGM Seacons fix that issue. It’s kind of a shame though, because the American fiction made the team very interesting. Win some lose some, I guess.

SGM also introduces a more or less capable female to the team of kids. Her writing is typical for the time, but still better than it could have been, especialy in light of the demotion Arcee took to secretary in Headmasters. Minerva is actually useful.

It’s much easier to care about this grouping of characters because there are fewer to focus on, they are less irritiating, and have more time to develop personalities. Headmasters was remarkably busy with a large cast of old characters competing with a significant roster of new faces.

The Transformers still have an insane desire to allow children into warzones, but that’s just something you have to learn to accept about them if you’re going to be a fan. The kids are the in, so the robots have to be irresponsible to a certain degree. I prefer to chalk it up to Cybertronians not having stages of development. You come off the factory floor pretty much ready to go. Or that is what is implied. If nothing else there are no robabies on Cybertron.

I bet Prince would know how Ed feels. :p The only reason Prince wore those high heels was because he’s like 5’2″ without ’em

I’m 5′ 1″ and have been teased for my height most of my life…but I’m a chick and what I lack in height I make up for with the ability to walk efficiently in 6 inch heels.

This is one of those times when I am grateful to be guy and at least 5’7″ (first thing in the morning on good days) – short for a guy albeit taller than Ed obviously. I can’t even imagine trying to walk in high heels – much less 6″ heels. I certainly appreciate what it does for a woman’s appearance when she can navigate the heels, but I feel sorry for them being expected to do so.

Sadly, I’ve always liked short women, but they’ve never liked me…I used to have a crush on a girl who was 4′ 11″, but she was never interested in me because I wasn’t skinny and built like a marathon runner.

My wife was teased because she wore hearing aids. I love her for it, despite that lack of hearing when she’s not wearing them (then again, it might be because she can’t hear me snoring when we’re sleeping)

I actually have a guy who loves me for it. He’s 6′ 4″, lol. Thanks for the kind words though. You sound like a great person, and I’m happy you and your wife found each other.

I know at least two couples where the guy is over 6′ and his wife is barely over 5′. In both cases the gal is quite assertive compared to much more laid-back guys – in fact, both of the women were teacher while the guys were both in highly technical fields. It makes me wonder if the guys were attracted to the small women who dominated situations like they were big.

I have a friend who is 6’8″. He married the logistics expert from his Company in the Marines. She’s a cute little Japanese-Venezuelan woman, just barely 5’2″. Yeah, they sometimes get stared at…

Funny considering my guy is planning to be an electrician and I have a habit of being the only gal in a group of guys but am able to control everyone mainly on attitude and the fact that some of them find me terrifying when angry….

I feel sorry for short people, being 6’3 brings so many advantages, except one disadvantage, its far easier to bang your head on a doorway…

Ah yes… being tall does have its disadvantages beyond banging heads on inanimate objects. Sports cars, for instance. Back when I worked at a detail shop, even with the seats all the way back, my knees still hit the dash. Don’t forget, we’re also told to always go to the back of any group photo, our clothes cost a little extra because stores almost always charge more for the XL and up sizes, and everyone’s always asking you to get stuff of the shelves to avoid having to go get a ladder.

There are some advantages to being short. I never have problems with having enough leg room in airplanes for example. When I was in college I took a test from the Marine Corps to see if I could be a pilot. Between my very high score on that test and being short enough to fit into any of their fighter planes comfortably, the recruiter was drooling at the prospect of getting me to sign up. Unfortunately for him I only took the test as a lark and had no intention of joining up.
I also walk under a lot of hanging stuff that tall people run into – and short chicks are the cutest (in my opinion) so they were always just right for me… ;-)

The Marine Corps was an experience for me. Of course, you shouldn’t join if you’re only interested in flying. Competition is terribly fierce, and all Marine officers are rifle platoon commanders first. (Just like all Marines are basic riflemen.)

It is hard work. It is a sacrifice. It is sometimes more BS than anything else. Still, I have yet to meet a finer group of people collected in one place in my life. I really enjoyed almost all of the people I worked with.

When I worked Security at a Nuke Plant, I was 6’0″. My friend and co-worker Jean-Marc was 5’2¼” (he’d always hold up a coin and say, “Don’t forget the quarter!”). I figured at my height, everyone in the world was going to be either taller or shorter than I.

Walking through a cable vault at the plant one night, I nearly knocked myself cold on an overhanging cable tray. The hung it at six feet even, and I was wearing a hard-hat and boots with 1″ soles. Jean-Marc never let me live that down!

Friend of mine is really tall. One day he managed to stick his pickup with the differential on top of a block and the door wedged against a post (he’s skilled like that). The other door wouldn’t open, so he was forced to climb out through the driver’s side window. This is one occasion when he had to answer, ” sometimes” to my “Sucks to be tall don’t it?”(If you’re wondering, yes this is the same one that was stuck in a blizzard for two days.)

I’m in school right now to enter the aviation industry. This industry is not much fun for tall aviation maintainers. I’m 5’11”, and I still think I’m too tall to navigate around some of the airplanes out there. You ALWAYS have to watch your head around high-wing airplanes, and to get to many of the avionics, you have to climb through paneling that can be only about 1.5-2 feet across. Oh, and you have to move the computer systems that those panels open up to, so you can get to the antenna connections that are even farther back in the plane. Also, be mindful of those hydraulic lines and other electrical wiring. People aren’t supposed to go back there, so they don’t feel the need to protect it.

It will be a fun industry, though. I will know those planes very intimately.

I’m the opposite I’ve been teased for being a very tall woman. (6 ft)