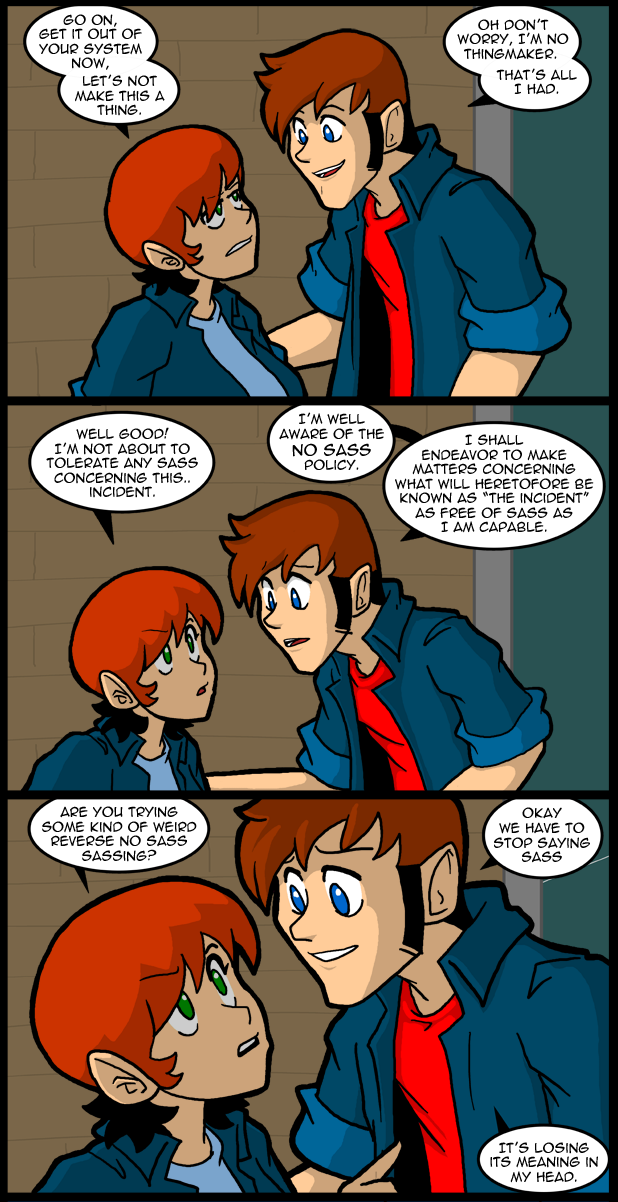 This is such a goofy exchange.

I took your guy’s suggestions to the website people. I guess they’re gonna do a test thingy. Maybe they’ll make it so I can show you all and you can have some input.

A friend of mine gave me the audiobook of Harry Potter one. It’s the British Stephen Fry version that you can’t get over here at all. Or at least not through any online store I’ve looked at. In any case, I had forgotten how much more there is to the story. The movie versions have crowded out the older books in favor of their faster storytelling style. Also the actors have replaced a lot of my headcanon images of the cast. I had forgotten that McGonnagal was young enough to have black hair in the book, and Ron was tall and gangly from the start. There’s also the matter of how many coincidences seem planned if you already know what’s going to happen a few books later. Anyway, it’s nice to be back at Hogwarts.

I’m not much of a reader anymore. When I was much younger I read a lot, but over time less and less. It’s very hard to set aside time for just sitting and looking at words. My mind constantly pesters me to do something else. I read a lot of paranormal books when I was in gradeschool, in middle school it was mostly haunted mysteries, like The House With A Clock In Its walls. I also read Lord Of The Rings and The Hobbit around then. In high school early on I read fantasy books, but by then I was getting out of it and focusing on being moody and having an elaborate series of mental breakdowns. My attentions as far as reading was concerned shifted to comic books, and Magic The Gathering cards. After that it was basically now and I just read comics, except for a short time when a girl I dated read a stack of Discworld books, wich I also read. If I pick up a book now it’s almost always trivia or strange facts. I read them in tiny sections then recite the passages, distorted by my memory, to my father and mother at our Saturday dinners.

Harry Potter was the last series of books I was devoted to, apart from comics. I once made the mistake of trying to read something by David Foster Wallace. I got a book of his short essays, which were fine, and entertaining, but then I tried to read Infinite Jest. It’s a critically well regarded book, but I am convinced this is only because the people reading it for awards didn’t understand what they were seeing. Not wanting to look foolish in front of other literary critics they all said they liked it so no one would ask further questions. I barely scratched the surface of the tome.

It is possible that the fault lies with me and the book rightly earned its accolades. I have my doubts. My memory of the style is vague. I seem to recal thinking that it sounded like a student trying to fill a word quota while not actually having researched the topic. It did not remind me of other works of his. I wonder sometimes if I should try again. Maybe if someone read it to me…

I really should just invest in audiobooks so I can draw at the same time. I’m always looking for content to fill the silence anyway.

If I may suggest a book series to get into: Redwall. Some 20+ books about swordfighting animals with British accents. It’s been one of the few series I can get into.

One thing I noticed about the HP series is that (at least for the first 5 books), if read one and think,”oh, wow- this book is amazing! There’s no way she can top this…” I got started on them right before book 4.

I loved the Sorcerer’s Stone… Until Chamber of Secrets. Prisoner of Azkaban is my ultimate fav though. It seemed like Harry’s life just came together.

Sorry for the ramblings :) enjoy your visit at Hogwarts. Drink a butterbeer for me!

There’s a few typos. The one I really want you to fix is that the word “you” is missing in Carol’s last panel. “Are you trying” is just “Are trying” in the panel. I’ll list the others by email if you really care, but that one is the one to fix.

I could never be with Carol. I would sass the hell out of her for this incident.

Is “Sassacre” a reference to the great Colonel Sassacre of Homestuck’s pranking legends, famed master of japery? It doesn’t seem like it is, but I’ve been finding Homestuck references everywhere these days, so I feel inclined to ask.

It is in so far as that’s the firt place I heard the word. He’s not mentioned, but it fit the text of the page as a title.

Sass sass sassafras, beep da da.
I seriously have no idea what that was.

In any case, great books are everywhere. Recently written, however . . . it’s like digging through turds and finding gemstones and rare metals.

Come back to Discworld!!! You only have to read 28 books to get to that one I was talking about last night (on facebook). :/ Nah, really, though. Terry Pratchett is the friggin’ bomb. Discworld is up to 40 books now and you have to read Nation and Good Omens. Neither are Discworld, but both are completely great and stand-alone. Maybe they’ll get you in the mood to read some more of them.
Skip the Good Omens audiobook, though. Unless there is more than one, the one I’ve heard is just the most awful monotone lump ever.

I used to read a lot- then I found web-comics. And you must bear a significant part of the blame. Shame on you.

Thirteenth Wheel of Time book just released recently, so my weekend’s shot. I think it may finally be the last, such as it is. It should be. …

Also, there are some differences between the British release of the Harry Potter books and the U.S. releases. I never cared enough to catalogue them or anything, but I do remember reading a friend’s from Scotland and then feeling totally ripped off by my personal copy. That being said, I tend to read most of my neice and nephew’s books before they do book reports (we’ll claim it has less to do with an appreciation for young adult/children’s literature than it does with then checking over terrible book reports, but we’ll also all know that I’m lying about that anyway…) as well as the thirty or so series I have in my backlog. And that doesn’t count individual novels/trilogies, Discworld, Xanth, or re-reads.

No wonder I never actually finish writing anything anymore.

You forgot something that was really huge for me, with the HP series at the start: the Malfoy family was dark-haired. It was a huge part of my mental image of them. I was appalled when I saw them blond in the movies, and even worse when book 5 (I think) came out with a blond Draco. For a few weeks, I thought I might have gone crazy, remembering wrong stuff, since everyone around me said he’d always been blond, but then I picked up the Philosopher’s Stone and searched until I found a description of him with his hair: black.

Why did they have to go for the evil-nazi-blond look in the movies? The actor doesn’t even seem a natural blond!

My problem is that the more I say sass, the more I hear a slang word for buttocks…