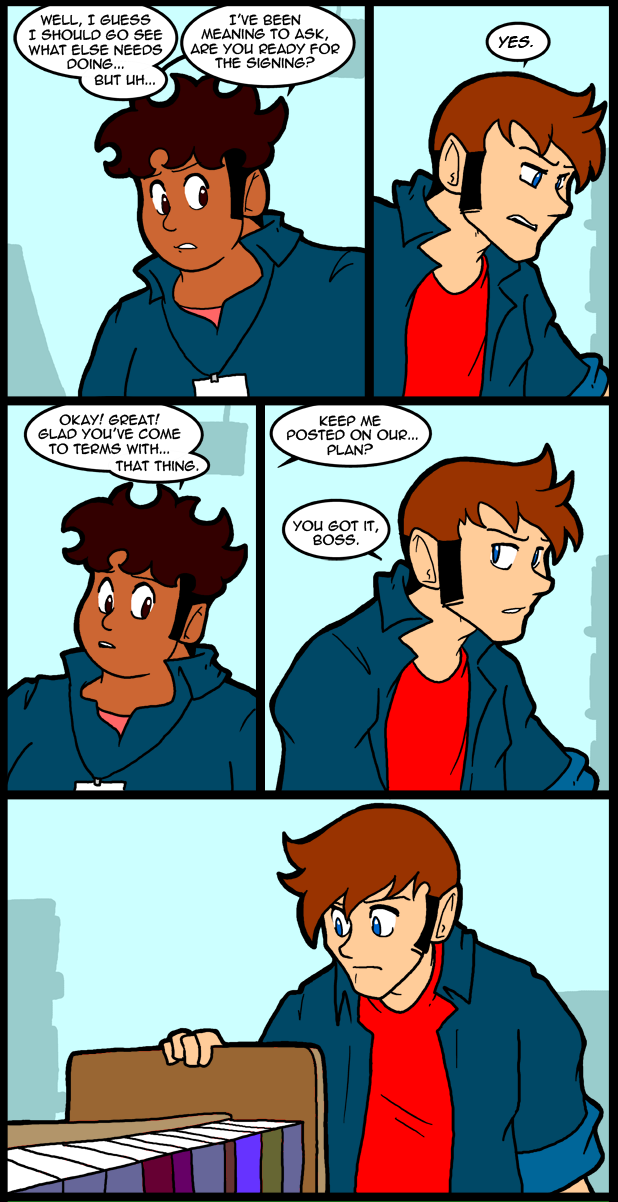 I hate to end the week on this, but there’s just no helping it. This went through some mutations; various thoughts Thomas had and whatnot, but eventually decided just to leave it silent. I’m not going to lie to you, I have not been looking forward to the oncoming section of the comic. It’s been a struggle filling out the outline and recent events only complicated matters. If nothing else I’ll finally stop getting emails asking when Thomas is finally going to be reunited with this kissmesis of his.

Warning! Explanitory Spoiler!
For those of you who haven’t ever read the archive, the first story is partially about Thomas finding a book written by an ex girlfriend and being very irritated about how his life had gone nowhere while she was doing a thing. He also finds out that she requested that he be there to help with a book signing that Mike, having no knowledge that the breakup was a bad one for Thomas, set up. The ammount of time between then and now in comic time has never been explicitly stated, but in my mind it’s been a few months.
End spoiler.

In other news the time has finally come to redo the website. Problem is I’m still not in a state where I can properly think about this kind of thing. So I’m asking you guys for ideas. You can leave a comment here describing how you’d like things to look, what you might want changed, ect. If you have the skills to make a visual representation you can mail them to me. the address is on the link bar where it has been for years.

All I really want at this point is for the archive to be searchable in a better way, the navigation buttons to be large enough that you can easily use them on mobile devices, the comments be saved, and the site to be a dark enough shade of whatever so that the comic is what your eye is drawn to. The ads kind of dictate how the layout works for the most part anyway, so I don’t know what really there is to be done.

In any case it’s a chance for you to participate in the magic.

Thankfully, I think it’s just the site itself that is being remodeled, not the artwork.

We’ve been anticipating this for a while. Personally, I don’t know if I’m excited or dreading what comes next. Just make sure you stay cool through the presentation, ‘K?

Minty terrible green like the inside of the store! Wheeeeee!

Poor Thomas. It’s a good thing he has Carol to help soften the blow, but it’s always a tough thing to be forced to look at your life critically and review your failures. All of us fail from time to time – some people continually. How we deal with those failures is an indication of our core character. Here’s my take on the major characters and how they deal with it:
Nina decided to be upbeat and an optimist.
Reggie is in denial. (see comics 540, 591 and 600 for examples. Thomas points it out in comic 566.)
Ed became combative.
Jo took up smoking and seems to be so timid that she doesn’t risk failure often enough to really experience it much. She doesn’t seem to be afraid of it though (see comic 584).
Mike is blissfully ignorant, but humble and willing to learn (I like Mike). Mostly he avoids failure by avoiding taking responsibility even though he’s the boss.
Carol puts up an abrasive outer shell to protect herself.
John just rolls with the punches.
Jess never really tries because success comes easy to her.
Wes is opportunistic and apparently adept at shifting blame for his failures and conniving to take advantage of others failures.

Then there’s Thomas. Thomas, Thomas, Thomas. What do we do with you. He carries around his own failures and worries about others as well. He seems to be taking every failure personally and it’s weighing on him. Right now his two big successes are keeping the store running (no mean feat but by his own admission a lost cause before you even begin) and landing Carol – which is a major success if he will admit it to himself. – see comics
334 – Thomas demonstrates why he is a success as a boyfriend
515 – Carol points out that he stresses over other people’s problems
537 – Carol points out that he feels responsible to fix everyone’s problems
627 – Thomas still doesn’t realize he is a success

Heh – fun going back through the comics again to dig up those references. Whataya think of my psychoanalysis of your characters Crave?

If you’re going expressly for mobile devices, make sure to leave a little bit of spacing between buttons. It’s very annoying, when navigating an archive, when “back” is too close to “first”, and especially when “next” is too close to “last”.

I’ve mentioned this before, but how about having an archive that is searchable by Carol….I mean by the characters, and the comics they appeared in.

An idea for the archive is to put it into “Chapters” or at least how you see chapters in your mind. However, if you keep it in its current format you could make the months into clickable tabs that expand to show all of the comics for a certain month, making the page be sgorter when you first open it. One more piece of advice, for now XD, would be to change the color of the text on the archive page, the gray makes it blend into the background.

Sorry for the text-fest, but I hope I might have helped!

I can’t get it to change. Something is broken in the code and I can’t find it. It won’t let me adjust the color value for some reason.

This isn’t exactly “layout” but if you’re looking to make some site changes, perhaps you ought to look into arrow key (pc)/swipe (mobile) navigation between pages? They’re a lot more organic than clicking arrows could ever be.

First comment by the way, love your work. Keep it up. :)

Thanks for the feedback and for reading. The arrow navigation is enabled for this version of the site. I’m not sure about the ,net though…

The fact that Mike (The Manager) isn’t on the little header logo makes me worry about how long he’ll be with us.
I like the big man – hope he won’t lose that manager role