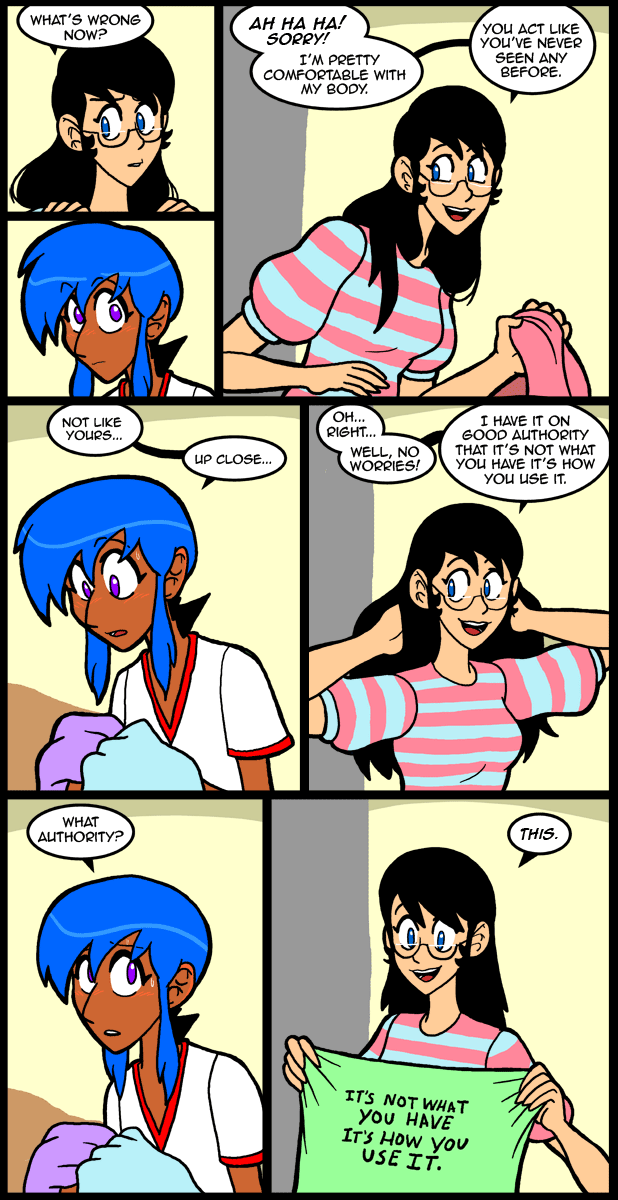 Yeah, I’m pretty in love with the t-shirt gag. I make no promises that it won’t happen again.

I absolutely didn’t want this scene to devolve into one of those “I wish I had bigger boobs” moments that show up in everything, but particularly anime. I also dont want Jo being reduced to having this one character trait, wich is something else that happens in anime a lot. The flat chested girl never seems to be able to let it go. Her percieved deficiency becomes who she is, and in that she is reduced to little more than a trope. At this point Jo is already well rounded enough, and has shown other telling charicteristics, that such an outcome was unlikely, but still… Better safe than sorry.

One of my exes loves chicks with big tits, and thinks that she’d appreciate them less if she also had huge tits…

Which is an interesting standpoint, methinks~

Well, if it’s on a SHIRT it must be true!

…Or maybe those are pants… Hrm, if they’re on pants I think that means they’re a lie? What are the rules on this?

It’s only a lie if it’s on pants that are on fire.

If it is to become like an anime Jo has to start passively aggressively hating her.

Aw, Brooksie, don’t worry about the size of your boobs, there are plenty of men like me that don’t give a darn about that, after all, it’s the booty we’re after.

Awww .. gwan wid ye – Brooksie’s boobs are perfect as is. As are?

It’s the truth! On her, anything bigger would look funny . . . I dunno about the shirt as applies to boobs, but it’s definitely not each piece in isolation, at the very least.

I don’t know if this is a good place to say this, but: there’s an error on the links page. “Two Guys And Guy” is falsely listed as “Two Guys And A Guy.”

concerned reader lost in a sea of greyscape

I’m not sure what the problem is. The page loads normally for me. Can you offer more information? Just off the top of my head, almost every problem can be solved by clearing your cache. That’s what tech people always say.

Thank you sir for not making Brooksie a crappy anime cliché.