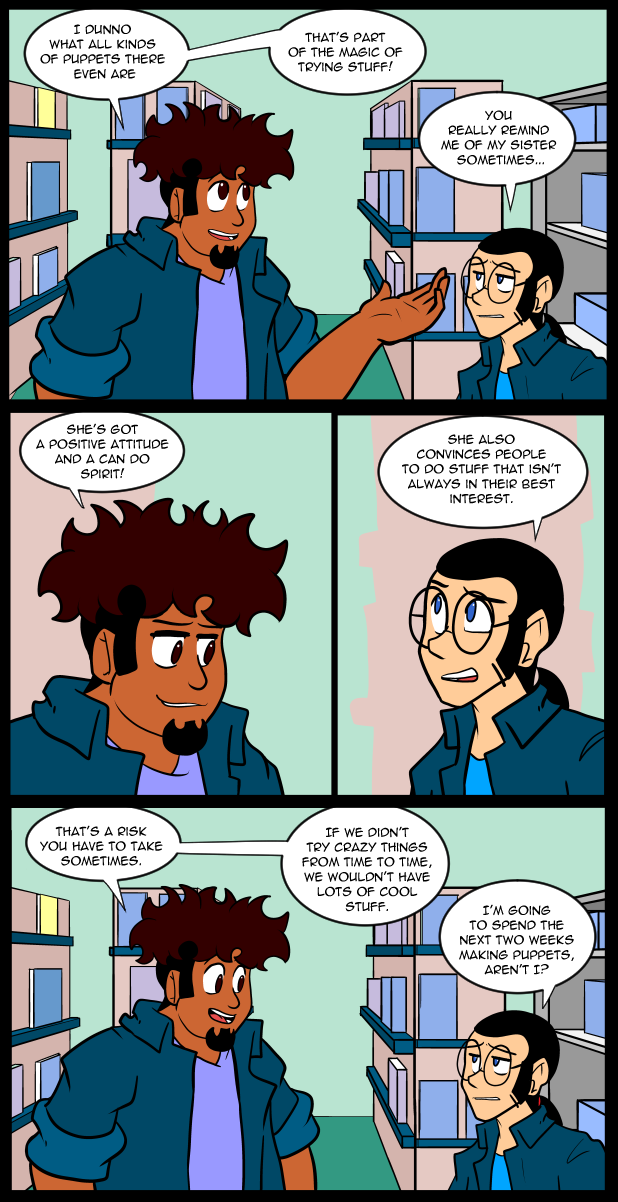 Ed and Mike are one of my favorite unintentional friend teams. They have shared interests and personalities that compliment each other. Mike’s naïve optimism is tempered by Ed’s negative posturing. He always seems to end up going along with plans, in spite of pointing out every flaw and potential failure point. Both kinds of people keep the other from getting too stuck in their ways.

I hurt my hip several days ago, I don’t remember if I said anything about it. What exactly I did I don’t know, but it was similar to the last time, but not the same. This time my left hip has remained mildly hurt even after the main pain in the low back finally subsided. I can walk, but I can’t go up and down more than 3 or 4 stairs before the leg gives out. It was extremely painful to do anything for a few days and now it’s about half as much. Except sometimes it’s okay for a few hours or minutes, then goes back to hurting. I tried to get the mail after the second or third day of it and my leg gave out on the way up the incline and I just pitched over into the gravel and dry sticks. it scratched my legs up quite a bit, and my hands. I also came down hard on my right knee. Getting up was very difficult without both legs. If I lock my left knee though I could still use it so that’s how I leveraged myself up after I slid down the incline into the ditch. Ironically falling over knocked my spine back into place right above my hip, so that’s when it stopped hurting so much I couldn’t even attempt sleep. My legs were extremely weak right after, but most of the functionality came back after 12 hours or so.

Combined with what is normally wrong with me this was all a bit much. Coming down on my side the way I did also hurt the rest of my back a bit. Luckily it didn’t mess my hands or arms up enough to stop me from at least doing the minimum level of art I’m doing now.

On top of all the other stuff my CPAP machine decided to tell me the motor was past its operation date. Luckily the machine doesn’t just turn itself off when it shows the error, it’s more like a timer that goes off after 20000 hours of use. As far as I can tell it’s fine, but it’s $900 to have the thing serviced at minimum. Which is bullshit because it’s super easy to replace the part and the part itself costs about $100 if you don’t get it from a price gouging medical service. So my plan is to try and find a motor replacement, then just keep it on hand until the thing actually quits. I can replace the motor in 30 minutes or so and have all the tools to do it already. This inflated pricing bullshit is intolerable. I’ll rebuild the whole goddamn thing if I have to. Bunch of fucking greedy assholes are running the world and we need to rise up and murder every one of them. That’s a whole other thing though. When I’m back running on all cylinders we can plan the bloody revolution together. That’ll be a fun holiday project.

Anyway, I’m gonna lay down or something. I have to get up in 3 hours and pill up Zombpa. Otherwise he may try to eat my brains. I’ll see you… Wednesday, I guess.

You know, if there isn’t a nuclear war or whatever.

Dang Jackie I feel like a slacker. You’re over here making moving stories and better-than-decent artwork, a truly great comic, all on a failing body that hurts to move. You even threw puppets into your storyline! Puppets! I just hope you realize how much you’re rocking

…and then it occurs to me, if there are puppets, it may at long last be time for the triumphant return of Sifl and Olly. This time, without corporate meddling!

‘cuz this is MY UNITED STATES OF WHATEVVVAAA!!!

Henson puppets, obviously. About your hip, see a doctor if you can. If not (understandable), it could be sciatica or sciatica like. I had something similar about fifteen years ago. Turned out it was my new, fat wallet that I had been sitting on that messed with my spine. Once I found out what it was I stopped carrying my wallet in back. I also got one of those collapsible walking canes from Wally-World and put it in the spot where I could easily grab it if I ever needed it in the future. Hope that helps a little.

“Bunch of fucking greedy assholes are running the world and we need to rise up and murder every one of them.”
Viva la revolution, down with money grabbing bastards! I’m with you Jackie; if you bring the pitchforks, I’ll bring the torches.

Personally, I don’t know how a revolution can legitimately work without naysayers decrying it as being partial to “socialism” and “communism” which are the “enemies” of the American way. Plus, you gotta have something in place that can create a sustainable economy for all of us.

I’m already convinced that the vote alone won’t change anything. The midterms, based upon the atmosphere, won’t really change anything nation-wise. It’s still going to be the same partisan bickering post mid-terms as it was pre mid-terms.

We have a 3 part plan: guns, gallows, & guillotines. God will sort them out & fire will sort us out,

No. I want it like the Americans the fist time we did it. They extinguished traitors. The means is just whatever we have to hand.

I can’t wait to see what the puppets will look like! :)