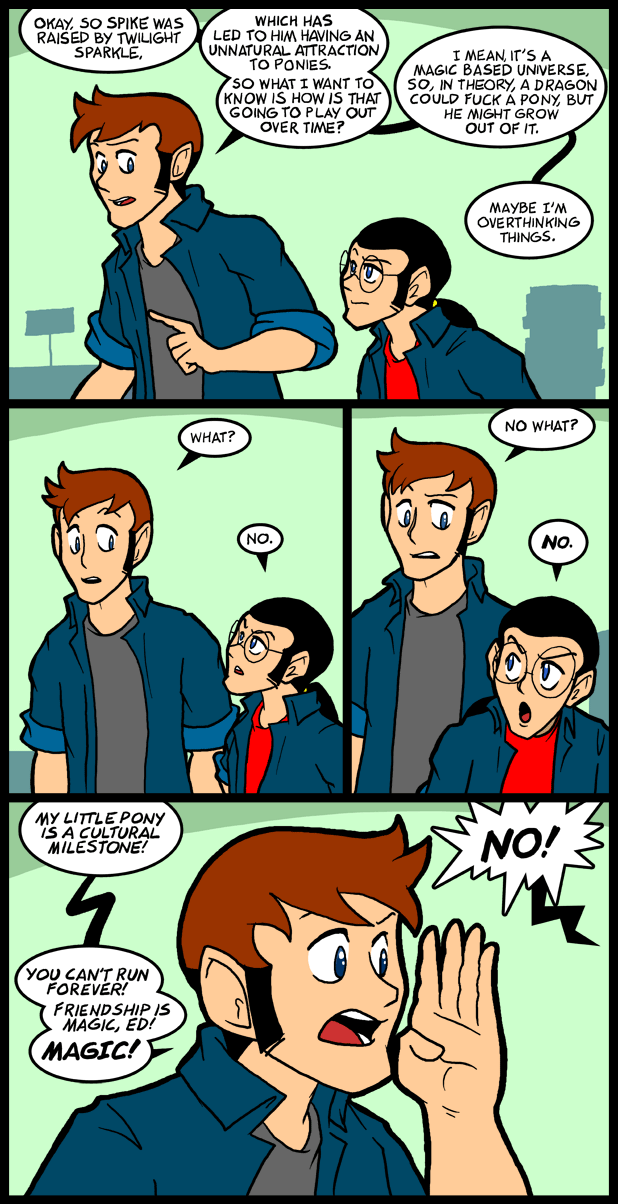 First of all, you’ll notice that this page has no page number. There are very few stand alone pages of Between Failures, but I don’t like to number pop culture stuff that I don’t think will make sense years down the road. Star Wars, Captain Planet, and what have you have a certain level of longevity that I’m not sure will be true of My Little Pony: Friendship Is Magic, especially since it’s a reeboot. If it goes 7 seasons or so I think the possibility is there, but I’d be surprised if it goes 4. I think it will be mishandled into the ground in season 3.

I hope that both sides of this… debate, for lack of a better word, can see themselves represented. If you don’t like something that everyone you know likes it can be really hard to put your foot down; to stand alone in a sea of bronies, if you will.

Usually I don’t do this, but I’m going to explain what Thomas is talking about if you haven’t watched the show. I don’t think anyone reads the blog first, so the experience won’t be changed for non pony enjoyers. The main character of MLP:FIM is Twilight Sparkle. She was given a baby dragon to raise named Spike. He’s depicted as being as capable as any adult character, for the most part, but still refered to as a baby dragon. He has a huge crush on Twilight’s friend Rarity. It’s a kids show, so they never get too concerned with the intimate details of potential dragon on pony action. Which leaves people like Thomas wondering what the eventual outcome of the relationship could be.

I am of the mind that, since it is a magical world, there could eventually be little dronies, or pagons, running around. Genetics be damned. Basically it’s Shrek rules. If it exists, you can crossbreed it.

For the most part I have avoided jokes that will not stand the test of time. Or at least I’ve chosen ones that will stay more or less culturally relavent for as long as I’m alive. After that, who gives a fuck. There is one joke that will be edited at some point. So first editions of the book will be more valuable, I guess. XD It’s the too soon joke really early on about Steve Irwin. People are already starting to forget The Crocodile Hunter. At the time I wrote that I couldn’t resist the timely reference. Looking back I realize it’s lost a lot of its impact. I already wrote the perfect replacement, but haven’t updated the page since the print version that’s available has the current page and I feel like that would be dishonest somehow.

If Whirlwind of Skylanders is any indication, dragon/unicorn cross-breeds are possible. Now the only question is whether the offspring will look like her, or a Kirin/Quilin (basically a unicorn with dragonic features).

They don’t put thought into a lot of things. “Dragon diplomacy? Sure, Spike can stay home while we do that!”

But, in my opinion, such a cross would have to occur during spike’s adolescent years, to compensate for the tremendous size difference.

Okay, first off… ew, I never wondered that. I didn’t even consider it a possibility.
Second, Spike isn’t crushing on any pony, it’s just Rarity. I always assumed it was because she claimed to be the “Prettiest Pony in all the land!” and because guess what, she has three gemstones as her cutie mark. Now I don’t know how familiar you are with the show, but dragons eat gemstones. In other words, Spike’s crush is based upon lust for the gems he’ll never have.

Does he have any other reason to like her?

Now about the possibility of them “getting jiggy with it”, I don’t think that it would ever happen. Based upon the fact that when it comes to her relationship with the baby dragon, Rarity is an uppity bitch. She see him as a tool, often using him as a living push pin, a pack mule, and other jobs that would otherwise get her hands dirty. On top of this, Rarity knows what she likes, and doesn’t settle for less, and she likes princes and lords and pony celebrities, not baby dragons.

Well, the episode, “Secret to my excess”, (I think is the title) wherein Spike had his birthday and went on his powertrip, towards the end when he snapped out of it, he was confessing to Rarity.
Her reaction is something to note.

But at anyrate, fans of a certain degree always get bored and over-think these sort of things.
I know I have.

But even if (or when) FiM has a fallout, I’m still going to be hardcore brony.
I simply have too much wearable swag to abandon it.

I think I saw that episode. When was younger I had to spend “Bonding Time” with my girl cousin and was forced to watch whatever she was watching. I didn’t stick around til the end of it, but now I kind of wish I did.

ive been thinking about this for a while myself, and i SWEAR there were dragon ponies in the original toy line (mom ran a day care had to watch the girl shows growing up plus the original My little pony aired before something cool

Now the big shiny obvious question here is: is Ed “NO”-ing because he doesn’t want to think about ponies at all, or because he likes the show and doesn’t want Thomas ruining it?

It could go either way. I, personally, would be answering “NO” to the latter question. I hear something similar to that 40% of the time on a game server I play on. :P

My two little boys are big time bronies have converted me and are driving my husband crazy singing the opening song lyrics. But I totally think Rarity and Spike’s offspring would look like Ki-lin. and have the magic to boot. It. Would. Be. Awesome. ^.^

I feel like the Brony thing is going to have a lasting impact. I think it’s safe to say this because there are conventions. That’s what set the hallmark for Star Trek. That’s a big impact; very few shows have dedicated conventions. So, even if Hub mucks this up, people will remember MLP for years.

After reading your little rant box, I think the prediction of season 3 might be a little off now. I came in near the end of season two and was trying to catch up with the series before the finale. But while I was looking up all of the episodes I found a few discussion sites having the same predictions and started to worry a little, as I had came in late to the community and didn’t want to have joined something that was about to end. But now, after seeing the prospects of season 3, I believe it may well reach season 5 with strong standings. The fandom and community will never truly die, and as long as they’re around, there will always be the show that spawned them in one form or another.
On an unrelated note, I’m a little concerned for Spike with his crush on Rarity. And Ed’s probably that one person who will get slowly sucked in by the vortex that is Thomas and eventually come to like it. Or tolerate it at least. /)

Thanks to having friends who are asshats, i know for a fact that this question has been raised…and answered…in full…*shudders*gotta love the internet, for all the things we wish we could unsee…

Yeah, I am. I really thought they would tank it in favor of Equestria Girls.

I am with Ed on this one.
The way i normally describe “my little pony” is not for polite conversation

Thank you Ed. Thank you. I thought I was the only sane person left!

WHY. WHY ARE GROWN ADULTS TALKING ABOUT MY LITTLE PONY.

You must be new here.

With season four confirmed, I believe this reference is close to meeting your requirements. Also, ponies. I friggin LOVE this comic now, 100%. I was already at like, 86% but this pushed it up.

As far as I can tell from watching the series and especially the season 4 premiere; season 3 is more of a demand by Hasbro to apparently bring it up to 65 episodes so they could market it to other channels. So the writers decided to use it in order to introduce some concepts and experiment with different things like CGI (timber wolves), simultaneous episodes, the “reformation” of Discord (a fan favorite villain) and the Equestria Games. Since they only had 13 episodes they decided not to invest too much into the season itself and instead making it into a springboard for the future.

I try to reserve my opinion when it comes to “the ponies”.
I haven’t watched it.
I don’t want to watch it.
As such I don’t really consider it something I can have an opinion on.

Yet I STILL wish people would shut up about it.

Well, it’s almost done with season 4 now, and has a 5th announced, so it’s almost made it. :P The popularity is only growing now, too.

I was really worried at the time, but things seem to have worked out. I even thought Equestria Girls was cool. Kind of wish they’d revisit that universe.

. . . Rainbow rocks has Twilight in it, so there’s a pretty good chance she goes back to visit. At worst, it’s the twilight who was offhandedly mentioned in the first EG movie.

I am going to ask the question all bronies must ask… Best pony?

Man Ed, is your masculinity so threatened by being a friend that likes some pones?

I don’t hate the bronies, personally, but I’m not a fan of the show, either. Let people be who they are, judge them based on the entirety of their personality, and live life to the fullest.

Well, it was mishandled during season 3, but hey. It’s at season 6 now, so yay

I myself am a Brony and I have kinda wondered the same thing lol btw loved seeing Celestia in the background on the bookshelf a few comics back ;)

Joke’s on you, it’s been running for 8 seasons now.

I think its best not to think about those things…………

Jesus…. I remember reading this all panel back when the MLP thing was getting really big, and I was super into it as well. God this entire comic series is one big nostalgia trip.

And it’s not like other mainstream media hasn’t broached this subject, or, at least, very near it. Look at the dragon-asses in Shrek. Also, dragon-ponies sound awesome. I imagine something like kelpies or hippocamps.

“Dragonasses” sounds like it could have been a real Medieval word.

Hehehehehe the comment under this comic did not age well :P