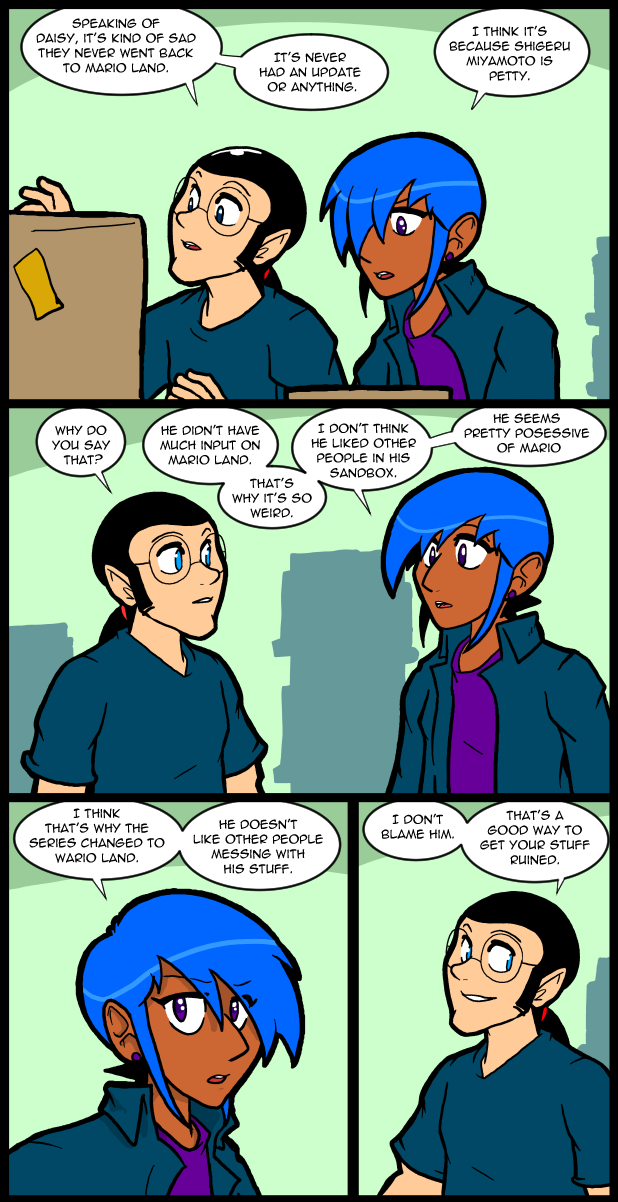 The stories about Shigeru Miyamoto being low key vindictive about stuff always exist on the shadowy edge of articles about game development at Nintendo. I always wonder how many of them are true, or if they’re exaggerated by the party who felt wronged. I suspect that he doesn’t like people messing with his stuff because he’s proven more than once that he makes the big money when you leave him be. Of course there’s also Starfox Adventures, so nobody’s perfect…

Not just Starfox Adventures, but the little story bits for Rosalina in Mario Galaxy were put in completely behind his back because he was vetoing it under any other circumstances, and they’re a fan favorite.

I’m pretty sure he’s also the person who basically killed the Paper Mario series by trying to shove mandates in there that just aren’t well suited to an RPG, let alone an established one with a past history of not being at all the way he thinks a game should be.

Dunno if I’d say it’s because he’s petty, necessarily, but he definitely lets his ego blind him a little. He’s got exceptional talent, but he’s letting his well-deserved high opinion of his own ideas bleed out into areas he actually doesn’t understand that well.

Also, I’d say it’s notable that Mario Land 2 released in 1992 and Wario Land in 1994. There’s a certain other Mario product that released in 1993 that definitely killed a lot of willingness to let other people have control over the brand…

“I’m pretty sure he’s also the person who basically killed the Paper Mario series by trying to shove mandates in there that just aren’t well suited to an RPG, let alone an established one with a past history of not being at all the way he thinks a game should be.”

As a fan of the (older) Paper Mario games, and RPGs in general, could you elaborate on your theories here? I’m curious.

He’s reportedly the person behind at least some of the changes seen in Sticker Star onward – cut back on the story, don’t use unique characters, don’t use less established races. I don’t remember seeing much of anything said about who specifically was behind the weird fixation on the removal of EXP and general character customization, but given the circumstances, I’d expect he had a hand in that, too.

The end result of the sweeping changes to the series is that it took until The Origami King to get something that was actually good again, and even then it’s still got a lot of rough edges – it is arguably being carried by the quality of its storytelling rather than its gameplay, but in all fairness the gameplay is at least decent now, having switched skills from one-use consumables to something more comparable with Breath of the Wild breakability, and having a UI that is not a complete dumpster fire like in Color Splash.

It still is a bit ill-suited for a turn-based RPG (well, for the most part – most bosses seem to be actually quite engaging due to their very different battle system). Non-boss enemies are still a bit too slow-paced and not worth fighting – you can get away with making enemies unrewarding to fight in something like a platformer, in which the combat takes about a single second, but doing a mini-puzzle at the start of every single fight does weaken the pacing. It really feels like this game SHOULD have been an action game instead.

Alternatively, it feels like the devs are pushing as hard as they possibly can right up against the very edges of the mandates. The knowledge of how much better of a turn-based RPG it could be if it was allowed to take elements from the first few PM games is always right there, weighing on your mind. They genuinely have some amazing concepts here, but they can’t all reach their fullest potential in an RPG that is not allowed to use some of the traditionally most successful RPG elements.

Dunno, I never played Color Splash (and Paper Jam), so I can’t comment on it, but I kind of liked Sticker Star and I absolutely HATED Origami King, to the point where I never bothered to even try to beat the final boss. If the next one is remotely like that, I won’t bother. The combat mechanic is horrible — oh, you mean I have to solve a puzzle with a time limit while the game actively tries to distract me and if I fail then even the weakest enemy will do sizable damage? AND not only do my weapons have practically no attack power but I have to keep buying them over and over again? How could I NOT love that? — and it abandons a lot of the “lore” of previous titles (Bombette and Admiral Bobbery could explode as often as they liked without any permanent consequences whatsoever!), and the way you never, under any circumstances, got any control over the contents of your “party” was annoying. I really felt like the money was wasted on that one; I’ve never found any other title in the entire Mario franchise to be as frustrating and annoying as Origami King.

Honestly, no idea how you liked SS but not OK. The consumable attacks were one-off things in SS, there were no party members to be annoyed at not being able to control, there was almost no story, and the need for Things to fight bosses was… not a great decision.

The timed puzzle combat elements aren’t there, and I can see why someone wouldn’t like those – even why it might make OK the worst game in the series for someone – but I just don’t see being able to like SS.

The first time I played Sticker Star I beat half the bosses without Thing stickers. It’s generally not impossible, except possibly for Bowser himself, it’s just difficult. (And the bosses have hints about which Things they’re vulnerable to in their fight/area, so if you fail the first time, you can go gather the appropriate Things. I admit that it’s a bit annoying that if you want to use Things to hit boss weaknesses, you basically have to take the levels out of order, because for example you don’t get enough of the bat Things for the Pokey battle until world 3, but since the game lets you play the levels out of order that’s to be expected.) The consumable attacks were a little annoying at first but it was fun learning how to get the good ones. (Also: it was far less annoying to have consumable attacks than it was to have such limited storage space for them.)

I didn’t mind the lack of switchable companions in Sticker Star because there were no companions in the sense of the earlier games. Kersti doesn’t do anything, she doesn’t fight, she’s just a way to insert dialog since Mario is silent. Origami King was marketed as having multiple companions, and then it turned out you got one single one for a chunk of the game — who usually didn’t actually do anything and who you couldn’t control — and then you got a few more towards the end, but you couldn’t swap them, they didn’t open up any new areas, and they were, again, useless in fights. And Origami King has the same story as Sticker Star: new enemy appears which is paper-related, rather than Mario-world-ish, and corrupts the world, which you gradually purify and restore to Mario-world-ish-ness. The ultimate ridiculous motive of Oliver was just an insult.

Sticker star had no original Mario characters in it. By that I mean any enemy/toad from the Mario universe that wasn’t already unique.

No one really thought anything of it at the time, because it was just passed off as a handheld title.

Color splash thing came out and had massive backlash asking where were the unique toads and everyone. It was there during an interview that they stated that if they were using Mario character, they had to remain as Mario characters. Nothing could be done to make him more unique.

It was then during origami King that they said it again and said it was the wishes of the series creator.

Oh, people definitely thought things about Sticker Star. However, I don’t think people were horribly concerned yet – not just because it was a 3DS game, but also because the fan reaction to it was negative enough that surely Nintendo wouldn’t continue using those severely disliked concepts. Okay, sure, Nintendo tried another low-story game that tried to shake off some of the things considered mandatory for the genre, we’ve seen them do this successfully before, they’re allowed to have some duds once in a while.

But they did it again with Color Splash, and, well…

As a hardcore Starfox fan we don’t talk about Adventures. Star Fox 64 was awesome. Star Fox assault when it wanted to be Star Fox was good. And I enjoyed Star Fox Zero I know I’m in the minority on that. I’m just hoping for another new Star Fox game

And Star Fox Zero… and Skyward Sword… hell, I think he mainly makes good stuff when there’s other people to reign him back in a bit. Same story with George Lucas, Keiji Inafune, Joss Whedon, and so on and so forth. But people love to make heroes out of public faces…

I don’t think people necessarily need to rein him in to get him to shine, I think his main issue is that he thinks his core philosophies for video games can apply to every video game ever, and that the twists he brings to existing concepts are always incredibly innovative when sometimes they just make things worse.

I think he’s also very burned by the way something like the Mario Bros. movie turned out.

He’s kind of the perfect mix of talent, experience, and having seen other people fuck his shit up to be VERY closed off to ideas he doesn’t agree with.

It wouldn’t be as much of an issue as it was if it wasn’t for the fact that he’s not learning to loosen his death grip a little. He doesn’t have to completely turn his franchises over to others, but he needs to learn better from successes like Rosalina’s backstory in Galaxy or the poor response to the new Paper Mario games.

I should point out that Shigeru Miyamoto didn’t actually have anything to do with Star Fox Adventures. It was made in house by Rare as Dinosaur Planet, then Nintendo noticed their talking space faring fox pilot bore striking similarities to Fox McCloud. Shigeru Miyamoto was the one to suggest Rare turn it into a Star Fox title by replacing their OC fox with Fox, so they could keep developing the game. The rest of the game play and the story tie ins were Rare, not Miyamoto, changing things.

Shigeru Miyamoto does have his cloistered moments when it comes to games. I remember watching a video about the making of Zelda: Link’s Awakening. He was very dead-set against its development as he believed it was not in line for what he imagined a Zelda game should be. So secretly the development team behind the game made it in secret. When it was near or completed (can’t remember exactly) they showed him the game and he quickly changed gears. Thus we have LoZ: Link’s Awakening as part of the Zelda library. I guess the bottom line for Shigeru Miyamoto is that unless he sees something that clicks with him then he’d be quick to dismiss it outright.