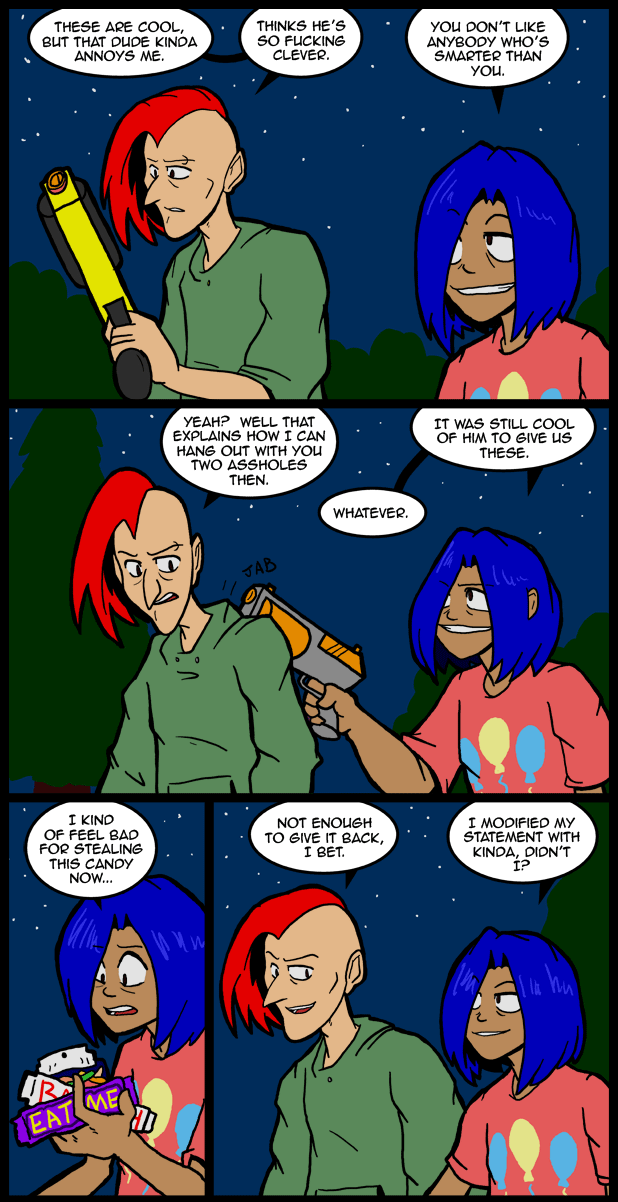 It’s kind of a shame that there’s no such candy bar as Eat Me.

This was up for most of Sunday because of my server’s fucked up clock confusing me, but whatever. Some of you got to see it early.

I saw The Secret World Of Arriety finally. I liked it, but overall I found it dissapointing. Parts of the story seemed vague and half told. I didn’t particularly like Ponyo, but when it got to the end I felt like I had been told a complete story and things were done. By the time Arriety got to the end it seemed like they were almost ready to get started. It was certainly pretty to look at though. It’s a shame they can’t make more movies at a time.

Edit: I wrote that first bit then fell asleep before I could finish. I’m a tired little guy.

1) Yeah, somehow I got that kinda vibe from these guys.

I’m not sure… but I think I raged when she pulled out the candy bars D::(

And now I’m confused. S/he could be either.
But I do know that s/he is an offense to the spirit of MLP. Especially Pinkie Pie. Pinkie would never steal candy. Well, except for that time when Fluttershy stole Philamena. Or that time on the Friendship Express.

On second thoughts, s/he perfectly embodies the spirit of Pinkie.

I have not yet figured out whether the blue-haired one is a guy or a girl. I thought I was sure for a while, then I got mystified again.

I don’t know if this is weird or not but I was happy the guy the left pulled out those candy bars.

my first thought was “my workplace doesn’t sell Eat Me candy,” =(. yeah i gotta agree, eat me candy would be so awesome i’d probably buy and eat it even if it tasted like crud.

lol yes I’m sure many would. Even comes in several varieties such as nuts and cream filling.

If they sometime, in the future,- make an “Eat Me” candy bar, I hope they also make some candy bars to go with it, with names like…Bite Me, and…Tunnel Licker!

Worse name for a chocolate bar I’ve ever seen was a “Nut milkbar”. Milk chocolate and mixed nuts. They never sold one from the gas station I worked at. They had to price them at 5 for a dollar. Sad part was, they were really good too.

Last I checked, she was still Palin. She just went away for a while.

At first, I was a little angry at the thief, but then I realized it probably isn’t a big deal even if they do it all the time. I personally dislike even petty theft, but they’re freaking candy bars! I just hope they don’t litter =P

We haven’t seen too much of these guys so it’s probably too early to judge, but doesn’t the last speech sound a little too technical for the character?

We see who the ‘brains’ of that gang is, don’t we?

Soooo, wait, I’m actually kinda confused… the person with the blue hair… is that a girl or a dude????? It’s hard to tell xD

I think you’ve got a missing piercing on creepy red head in last panel. Love this comic.. definitely one of my top favorites!

Dangit. I always forget that thing…

Ahhhhh, why’d the brony have to turn out to be a douchebag?

It’s more likely than you think.

feels “kinda” bad about stealing the candy, eh?
well, i feel “kinda” bad for blaming the game thefts on Wes (even if it was only in my head)

but seriously, the last several pages made me really want to get out the nerf guns at my work. :)

There’s an old cartoon called The Borrowers. I felt like Arriety was either assuming the viewer had watched it, or hinting at a reboot of it.

Also, is that a dude or a chick?

That is a good question…

The borrowers was a book series to start with, and yes, Arietty was based on it. I remember there was a cartoon series called ‘The Littles’ that was basically the borrowers but without paying whatever license fees to actually use the name. Never actually researched the relationship between the two, but if you’ve read the books and seen any of the cartoons the relationship is obvious enough. I just never cared that much.

As for the dude/chick, I think he/she/it is the rare crossbreed, the dick. Certainly its attitude confirms this appellation, yes?

I remember both. Looked it up, and apparently there was a “The Littles” book series too. Borrowers still came first, though, by a good decade.

There was a fairly poor writer, as in untalented, here in the states who wrote a story about a magic boy named Larry Potter and non magical people called something similar to muggles. I suspect J.K. heard about it and wrote her stories from the idea and because ther ewere only a few of the Larry books published, less than a thousand if I remember right, she got away with it. Nothing was ever said.

Well, there is a candy bar called “Eat More”, but that’s about as close as it gets. Al least up here in Montreal.

I hate thieves. They deserve to get what’s coming to them. People, normal people like the ones who own the store, worked hard to get the money to buy the stuff needed to build a business. Taking the stuff is 2 wrong things all rolled up in one sordid package, no matter how minor someone might think it is. A thief is also a liar and a cheat. There is no moral difference between stealing a candy bar from a store than stealing money from a bank, or even a pen from work. Yes I’ve done that. Not in the last 20 years though. I had an epiphany back then when I caught my own son stealing from the store down the street. Think about it. I really enjoy this comic strip but that last scene sucked. Anyone who thinks like that is a despicable excuse for a human being, no better than a politician. Sorry, I can’t think of a worse insult without using profanity. And YES, I do realize it’s just a story. My problem isn’t with the story just the attitude of the characters in that last scene and the real people who think that way.

One point about the Arietty movie that might be interesting:

The most famous and popular movies from Studio Ghibli are the ones made by Mr. Miyazaki himself. He made the Totoro movie, Spirited Away, Kiki’s Delivery Service, Ponyo, and others. (He also made some Lupin cartoons a few decades back, and his character design for Lupin is similar-ish to the design of Thomas in this comic. There is one full-length Miyazaki movie featuring Lupin, Cagliostro Castle, and if you haven’t seen it you *must*. It’s wonderful.)

So, if you watched it and you had the feeling “this is pretty good, but not really at the same level as some other Studio Ghibli movies”, you spotted the difference between the master, Mr. Miyazaki, and the journeyman (a Mr. Yonebayashi, about whom I know approximately nothing).

My friend and I were determined to see Arietty in Japanese, because we had a feeling the dub would ruin it. So we found a miracle screening and tromped in all ready to enjoy the film. However, as we sat waiting for the beginning I noticed the rest of the audience was primarily Japanese. In fact, we seemed to be the only two Caucasians in the theater. Doubt crept in, but we decided to stay anyway — only to discover that yes, the screening was just in Japanese. No subtitles. (Neither of us speak Japanese.)

We decided to stay anyway. And I have to say, having since purchased a DVD of it and watched it WITH the subtitles at home, it was spectacularly more enjoyable in a theater when we couldn’t understand what the heck they were saying. We got the gist of what was going on, and it felt much more immersive to watch the film without that pesky dialogue in the way. I particularly loved the sound design, and how LOUD everything was when they went out into the house.