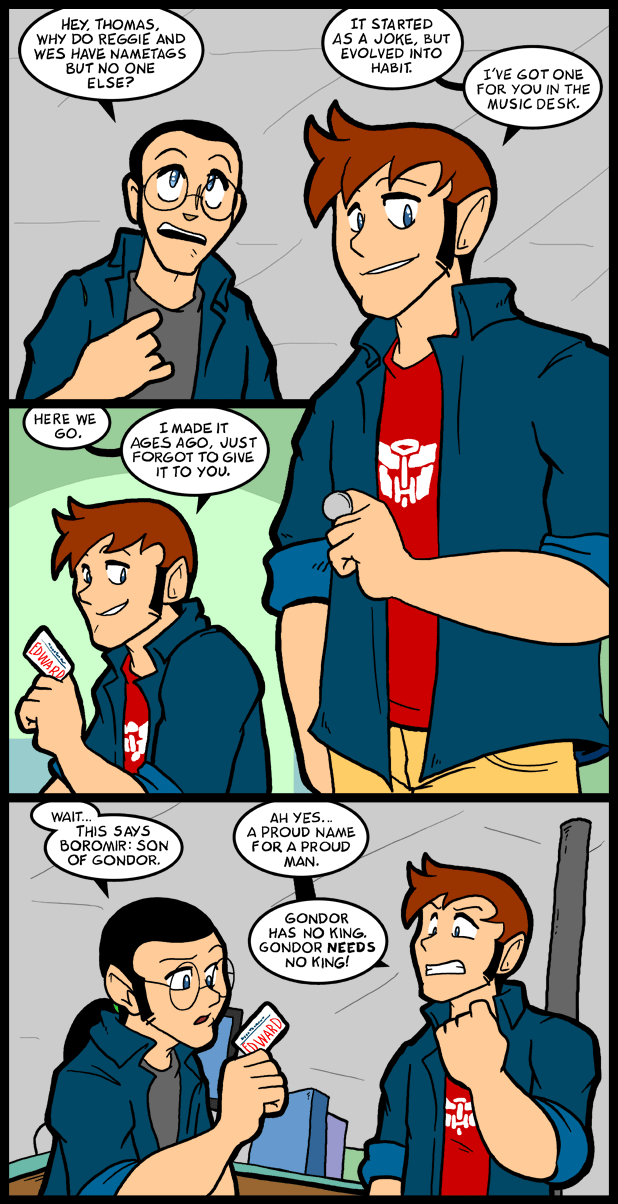 A bit of nerd clarification, first of all, the nametag reads Boromir: Son Of Gondor. It means son in the sense that someone comes from a place, not that Boromir is literally the genetic offspring of a person named Gondor. Boromir’s father is Denethor, son of Ecthelion, steward of Gondor. Almost everyone who will get the joke will understand this already, but I felt it might be a good idea to clarify that bit for the slower nerd out there nerding it up.

This page is one of the very first I wrote. It was originally part of the first story before I put Reggie out of it. It is still not the oldest thing I wrote that hasn’t appeared. It is, however, one of my favorite scenes.

Now that I have so many Doctors I had to get out my Legos and build some playsets for them to gad about in. I have a couple of buckets worth of Star Wars sets, which make darn fine sucky space sets when assembled in jagged arrangements. I have run into a problem unfortunately. I have 11 Doctors, but one companion. They need to make a companion set so the Doctors won’t be lonely. Some Daleks and Cybermen wouldn’t go amiss either. Those are available though. As of right now the only companions you can get are Rory, Amy, and River, and you have to get the first two out of those random packs, which is bullshit. (I noticed that Lego is doing blind figure packs now though. They had some at the store.)

If I got to choose which companions they made I would definitely want Sarah Jane (young version), Brigadier Lethbridge-Stewart, Rose Tyler, Jackie Tyler, Micky Smith, Jack Harkness, Adric, Jamie, Peri, Leela, and both Romanas. That’s actually 12… Alright, only the second Romana. Shit… I need Ace for Doctor 7. Okay, trade out Jackie for Ace. Those ones go in companion set 2 with Donna, Susan, K-9, Teegan, Grace, Martha, Nyssa, and… hmmm… It’s hard to choose the last few. These are almost all chicks too. The Doctor hung out with way more girls now that I look at it. Hot girls. Not much has changed really.

Some of you who have only seen the new series of Doctor Who may not be aware that the character Susan Foreman is the Doctor’s grandaughter, and first companion. A lot of stuff about her is never explained. It’s generally assumed that she died in the great time war, after living at least one human lifetime on Earth. It’s my understanding that there’s an audio drama that reunites her with ther grandfather in the form of the 8th Doctor, but I’ve never heard it. I didn’t think Time Lords and humans could interbreed, but she supposedly has 3 children. I’ve always hoped that they would revisit her character. She’d have to be recast, but I don’t think that’s such a bad thing when it comes to companions that are too old, or have passed away. That goes for Doctors too. I’d love to see another movie where all the Doctors have to gather toghether to stop some insanely powerful enemy. The 5 Doctors is a really great way to see all the incarnations of the Doctor doing stuff toghether if you want a little backstory, but don’t want to go all the way back. Of course #4 doesn’t really appear in that special as Tom Baker wasn’t on good terms with the show at that point. He only appears in some cutaway scenes before being trapped in a time bubble or some shit.

I’m pretty sure I described that show when I bought it, ages ago, but for those of you new to the blog the info may yet be of use. XD

Gimli son of Gloin would have been pushing the envvelope, right?

Too on the nose.

… as in Ed, the dwarf, huh?
He could just as easily been a Hobbit you know.

Ummm why did John and Tom change shirts?

In an Eighth Doctor story, humans and Time Lords are interfertile; otherwise not.

If you go back and look at the episodes with Adric, the doctor had three companions simultaneously for a while. So it’s OK to have more companions than doctors.