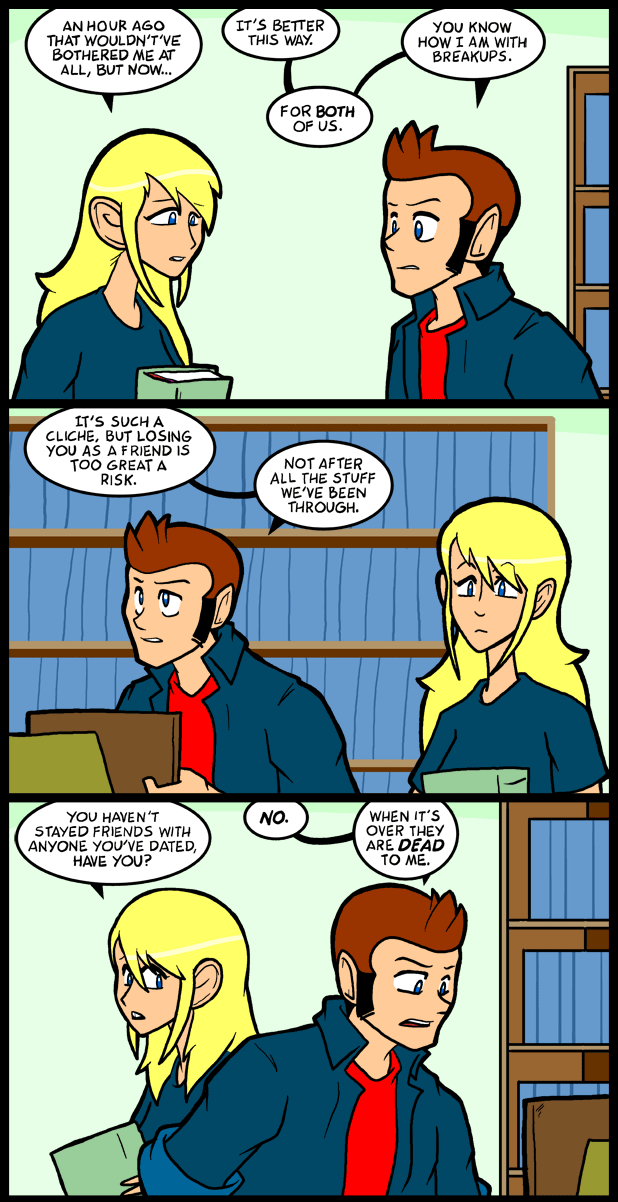 XD Oh drama, it’s been a while. How’s it going?

Okay, so… like the “community” that exists around webcomics is pretty small, right? So when you cross somebody it always comes back to you. Maybe it takes a long time, but it will eventually. Because of this a lot of us keep our normally catty natures in check, because you never know when you’re gonna need a favor, or whatever. So like the guy who runs this comic review site made one of my friends mad, not knowing we knew each other. For whatever reason the guy decided to interview me. Maybe I was just the only person who would respond to the email. He doesn’t strike me as a fan, but whatever. Anyway, it lead to me doing the interview in a way I wouldn’t normally.

I’ve done interviews before. Generally they send you questions and you answer them and send the file back. Which seems a lot like homework to me. Of course it would be different if anyone ever came to read the comic because of the interview, but they almost never do. Essentially you’re making content that will never be read. Unless, of course, you link back to them. Which is stupid because your readers are already your readers. Why would they want to read an interview with you when they have you around already? This is especially true with me because I make myself available to you guys in practically every way that exists. My messenger info is on more than one site, I have accounts on everything. If you want to talk to me it’s not because I’m hiding, it’s because you haven’t bothered.

So, like, these review sites real plan is to get hits from getting you to send people to look at their site. Or at least that’s how it seems a lot of the time. Even with the “well known” sites. That’s not to say that being asked isn’t flattering. Most people I know who make comics never get asked. Why I do is as big a mystery to me as anyone else. Things just don’t make sense sometimes. Like my friend who has a book being published even though no one gives as shit about his comic but me. What’s that about?
It would be one thing if they ever asked good questions, but they don’t. I’ve answered essentially the same questions every time I’ve done one of these things. So this time, since I was already feeling saucy, and my friend doesn’t like this dude, I decided to answer the questions in a real passive aggressive way. Just to see if anyone would notice. This was back in August. I have had about one hit from that website since then, and I think it was me… My friend really wanted me to post this right away, but I waited a really long time so that everyone would forget about the whole deal, then I could drop you guys on him and see what happens.

This is me unapologetically being a dick. Some of the stuff in the interview is untrue, the stuff about the other comics is just me being mouthy specifically to see if there would be any backlash. I also think that you guys will be amused because you are amused by my work, and my sense of humor. I Reggie it up here and there, but for the most part it’s fairly tame. If you like one of the comics I slam try not to have a bitchfit over it. It’s just nonsense. I like the comics. Even the ones I give shit to. It’s okay for people to have differences in taste. You don’t have to get all rumpweepy over it.

I actually didn’t think he’d post it. I had a bet with another friend that he wouldn’t and I lost. Dude even sort of responds to my complaints about interviews being a way to get free content. Which shows that he at least read it one time. Like I said before, I’m sure there are people that would piss themselves just to be asked for an interview, and I’m sorry that you aren’t being paid attention to. You really aren’t losing out though. As far as I can tell they are of almost no value. My hope is that this will shake up the world of webcomic journalists and they will ask more interesting questions. I don’t know what they would be, but I don’t have to, I’m not a webcomics journalist… yet.

Here the link is -> Interview with me where I am a jerk.

That’s… that’s not a positive life he’s lead. And it doesn’t exactly bode well for Carol. Not every relationship works out and we don’t know if there’s a breakup in store for them. It would really suck if their friendship suffered over it.

Up to this point in the archives (still reading through the first time), this is the most I have empathized with Thomas. That last panel… I share his anger, and the pain underneath.

I can empathize with his pain but not his idea of a person being dead to him.

“This domain is suspended due to incomplete Whols Verification” I’m not sure what I expected from a 9-year-old link.