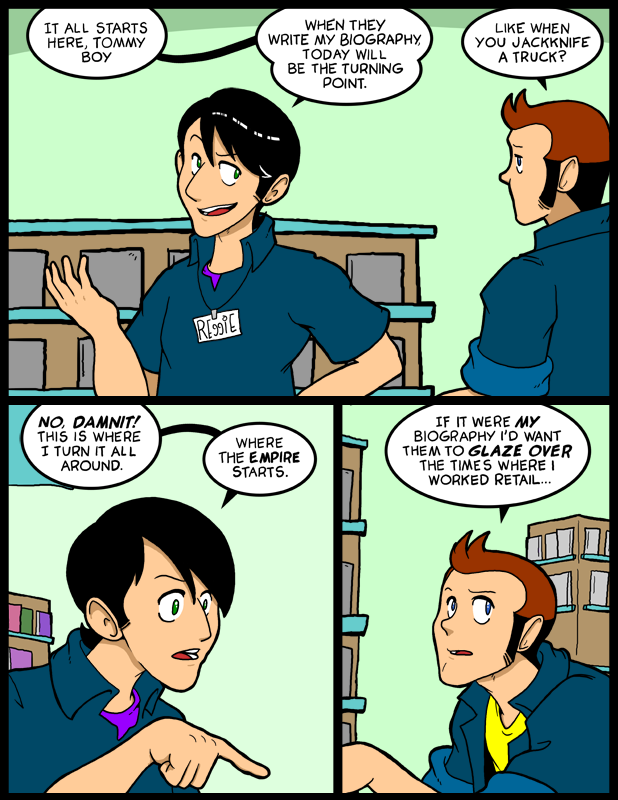 Many, many, months ago I scrounged around an got some points for my DSI for its download service.  I did this because I heard that Shantae: Risky’s Revenge was going to be coming out soon.  Then I waited.  I waited a very long time.  So long, in fact, that I whittled away my saved points with other games.  Games I enjoyed, but that left me scrounging for points again when Shantae finally arrived the other day.  >:|

Be that as it may, it was worth the wait.  Shantae is a platforming adventure game that looks as if it should have been released on the SNES.   It’s controls are tight.  You land where you intend to jump.  It’s old style play that feels like it came from the time when games really started to get good.  There are save points at all key locations so you don’t have to worry about losing a lot of time if you get killed, an improvement from the before times.  The item menu is touch screen enabled and has a handy map if you get it from the store.  The story is not deep.  You need 3 magic seal to do something.  Bosses have them, your busty pirate nemesis wants them.  CONFLICT!  That said, it’s always clear what you need to do, the casts is very amusing, and the world is cohesive.  Also, if you have any other games from Wayforward, there’s a shop that gives you presents for them.

Shantae is probably the best downloadable DSI title.  So far Nintendo hasn’t managed to come up with any must haves on its own for their own service.  Wayforward took care of that for them.

My biography is going to be all about how I was kept down by ignorant editors, until eventually I managed to climb my way to success with a hot five-some.

I kinda like this broken CSS. Very minimalist and easy on they eyes. :)

Reggie saying the Empire starts here is sort of like hiring Jar Jar to play Palpatine. Then again, I’d pay to see that in a movie. I can just picture him ordering Darth Maul around. “Yousa gonna take out da Jedi. Meesa gonna play senate like Gungan flute. Yousa doan know how wete dat is. It veehry wet.”

Personally, I like Ben Franklin’s idea. make it an Autobiography. Then again, he also used that as the name for his, thereby making me a copy-cat should I attempt to do the same…

I really do have a deep seeded hatred for Reggie. He’s just like all of the douchebags I remember from high school but combined into an ultra-mega-extreme-robo-megazord-douchebag. But it’s his douchebaggery that more or less makes me… Enjoy him as well fleshed out character. I still hate him. I just enjoy the fact that he’s around to give this world his special touch of jerk

A touch of jerk would make a great name for a fragrance.

I went to school with a lot of ‘Reggies’ in my time, the ones who thought Eddie Haskell was the hero on ‘Leave it to Beaver’ (yeah, I’m a little older than most of your readers). When I got to my Junior year in High School, I realized I was a little bigger than my tormentors, and they started leaving me alone. I did a dozen years of ‘Have Gun, Will Travel’ work as a contract Security Officer; it was a little dicier dealing with bullies who walked around armed, for a living.

If Kita were to write an autobiography, it would be written in third person, and it would just say “A Biography of Kita, by Kita Kazamaki” just to fuck with people who know the difference between biography and auto-biography. There would also be things about how she slayed dragons and evil snakeladies with nothing but fire and a sword of brimstone. N.n

Hi, new fan, and while i am sure you hear it enough, i am sure something awful will happen if I do not mention it. I just became a fan a couple days ago, and spent most of though days reading through all of the comics and becoming a fan.
also My fav is carol, for both her personality and body type, which i thank you for bringing since most people would not seem to not create like that. Though as a tall person i like Nina height, so i like a cross between the two girls, lol. I hate how i need to wait now for the funnies, but at least it be fun to see what happen next and waiting.

I found this and thought of the character Nina. That is all. http://specials.msn.com/A-List/Lifestyle/Gap-toothed-women-in-vogue.aspx?cp-documentID=26031501&imageindex=1&GT1=36010

I’m pretty sure you mean “gloss over” rather than “glaze over”. Your eyes glaze over when you’re bored or mystified.

I’m pretty sure I wrote it exactly how I wanted it said.

What? The end?! Nooooooo! No more archives to keep me busy! Of course, that’s probably a good thing… Anyway, I have spent many hours for four days (or was it five) drooling in front of you marvelous comic. Now that I’ve caught up, I have one thing to say: I am glad that I won’t be spending fifty hours a day in front of your genius anymore. One is good. XD

This is practically a scene right out of Red Dwarf. Replace Reggie with Rimmer, and Tom with Lister and it is almost shot for shot.

Rimmer actually has a similar interaction with Dave on more than one occasion. Up up up tickety boo!

I’ve been reading this comic for awhile and giving it a reread for the first time to refresh my memory on where everyone is coming from. Also I don’t read the commentary and such very much so I *think* the artist is familiar with the Roomies/Walky/etc comics but not 100% sure.

Point being: Either the first panel of “this will be my turning point”/”like when you jackknife a truck” is a nice subtle reference slipped in or it was fantastically unintentional.