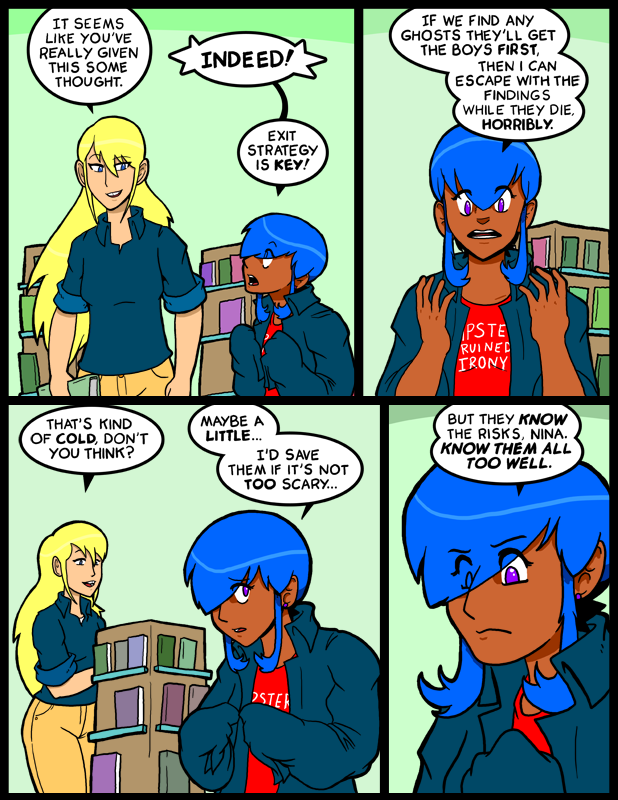 Jo’s last line is one of those that sounds like it comes from a specific movie, but it doesn’t.  I’m sure I’ve heard it more than once in film before.  If anyone can shed light of the first usage of something similar to this feel free.  I’d love to know the trivia.

I got a chance to see How To Train Your Dragon finally.  Dreamworks is pretty scattershot about film quality, but this one I liked very much.  In fact, I liked it better than bootblacking, and I like bootblacking very much.  Unfortunately since this is a good movie I fear Dreamworks will run it into the ground.  Hard.  Like they’re trying to attack the Pentagon.  Maybe not with merchandising, but with sequels.  The toys are actually pretty half assed.   No female characters, of course.  Which is a shame since Astrid was clearly the most effective fighter in the group, and important to the story.  Be that as it may, if they did a good job I would welcome more from that franchise.  If they intend to take a Shrek on it I would just as soon hope they not bother.

It’s only cold if they’re too stupid to realise the danger. Also, if no one puts the heater on.

I might be the only one that got the MST3K ref, my sister and i use that one all the time. That and being mellow like Ben Murphy.

Yeah, probably because I didn’t consciously make one this time. XD What thing is it and what episode?

Prince of Space, Episode 0816. I’ve been going through ALL of the episodes on youtube, and prince of space is certainly one of my favorites, as well.

And the ‘thing’ is ‘We like bootblacking very much’.

I thought he meant in to comic page. XD Yeah, Prince Of Space is one of my favorite MST3K episodes.

I was fortunate enough to be able to see Cinematic Titanic when they came to Seattle, and when Joel told us the movie (“War of the Insects” [Originally “Genocide of the Insects”]) was a japanese film, someone yelled out. “We will like it very much.”

This briefly confused Joel. He thought he was being messed with because of the tone of the delivery, but when he understood, he chuckled and commented that he wasn’t used to being heckled so nicely.
(It was an awful movie, and well worth the expense to see it shot down).

Man, your lettering is really coming together lately. Did you make a font out of it, or is it still all by hand?

It’s done by hand, but I try to stay in the lines better and not hurry so much. I have good days and bad. I also found a good nib for lettering.

Funny you should mention Dreamworks running that particular movie into the ground: They licensed it to Cartoon Network for a series. Not sure if the book series auhor got anything out of that particular deal.

Anyway, I never go ghost hunting myself, but I did get to harass some of the camera men from Ghost Hunters once. They were doing a shoot in NYC, at the merchant house museum (I think that’s the name. I’m terrible with actual names…), but I didn’t know who they were at the time. The cameramen, at least, didn’t have TAPS jackets on at the time, and I only figured out I had met them when I saw the episode. No footage of me (thank god. I’d break a camera with my hideous visage), but its the one where some guy is walking along and picks up one of their cases. No, I didn’t actually see that happen, either… Too bad, I guess…

I remember when that episode aired. XD It figures you’d be around during the one where something goes crazy.

I do kind of have that kind of karma, don’t I?

Wait…what does she want with the findings?

She will do science unto them!

I have so much love for How to Train your Dragon. Seriously, is me. Even now the DVD is out.
I suspect you’re right about the sequels, though, which is sad.

They could always die nicely. There’s nothing to say that ghosts always kill people horribly.

That logic cuts both ways.

I took the TAPS Paranormal 101 course at TAPS’ home office (a storefront in Warwick, Rhode Island) a few years back. It was $40 back then, and Kristyn Gartland taught the class. About half the class was the actual process of paranormal investigation; the other half was managing your investigating team. it was pretty neat and very informative, but no, I didn’t Jay or Grant.

But hey, Brooksie can go ghost hunting with me, anytime! I’m nice and big, and easy to hide behind. I’ve encountered a few spirit entities over the years, but none were hostile; one was friendly to the point of being a bit of a pest and was a frustrated geek — born 150 years too soon!

Brooksie really seems like the kind of girl I’d love to date. haha

Between HTTYD and Kung Fu Panda it seems like Dreaworks is finally learning how to make good movies without ogres in them.

I have to admit, I’m pretty excited there will be a sequel. The Shrek series did run a little too long (4th) in my opinion, but they were all decent films to say the least. I’m just hoping that the sequel is better than the extra on the DVD (Legend of the Boneknapper).

Remind me never to take Brooksie anywhere where frights may be had, since being male seems to make me expendable.

Or maybe we can run away in terror together, as I am the coward, too.

I am loving Nina’s outfit.

Well, it is one of those things that makes males feel useful…
Volunteer, Yep…
Though the phrase chosen can help
Oh my, you are big, will you come with us and protect us. – big smile
Hey Fatso, we need ghost bait, come with us. – less effective

Brooksie is starting to annoy me. Nobody can act so manic for so long and not get called out for it.