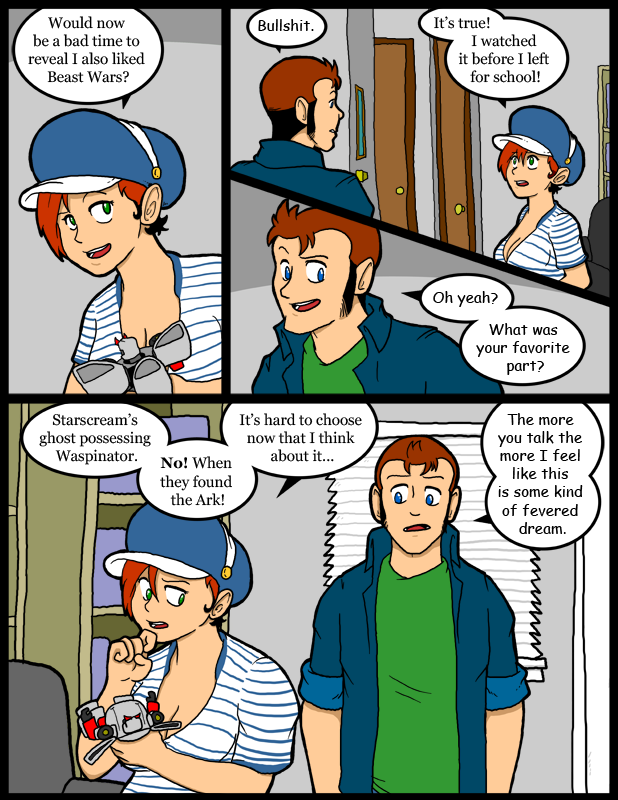 I’ve actually known 3 girls who expressed liking Beast Wars when the subject of Transformers came up.  I assume that there were others, but we never got around to discussing the finer points of the Transformers franchise in the time I knew them.  Typically they found Beast Wars then went backwards to Gen 1, as they were younger than me.  I expect if you let Carol ramble long enough she’d also list the Silverbolt/Blackarachnia romance, Megatron’s speech patterns in general, the revelation of the golden disk, and any scene with Rhinox in it.

As I may have said in the past, I was not a fan of Beast Wars until much later on.  At a point when I had expendable income I picked up the first DVD set and realized the error of my ways.  They should really revisit that concept.  It would be cool if they gave it a shot in the Animated universe.  They seem like a good fit to me.

My brothers watched an array of Transformers shows growing up, but for some reason the only one I ever got into was Beast Wars.

It was probably the best written one. XD

Beast Wars was so much win. I wish some network would pick it up again so I could watch it with a fresh view.

They have episodes of BW on youtube. I too am a girl who loved beast wars growing up. Still freaking do! XD

The DVD sets aren’t too pricey, and blue ray is bound to crush their spirits even further.

Why do you taunt us with this vision of perfection?
o(>w<)o
I think the episode where Primal has that fly stuck to his chest that makes him aggressive is my Fav
Or the episode where Rhinox eats those bean plants that're growing all over their ship

I need to watch those again!

Dude…Optimus was hardcore with that fly thingy. o.o I watched Beast Wars here and there as a kid in the mornings before school and that was one I was lucky enough to catch.

If the purpose of Carol’s visit as not sex, she’d better stop acting so hot. Right now she’s just waving the red cape at the bull.

be careful if this goes on for too long, people will want an x-rated version of sex, like Least I Could Do almost goes to on a regular basis

Could I charge for that? XD

I think you could, its your material, and you would make a killing! XD

If anyone could turn a bull aside it would be Carol…

I was a Cheetor fan until they made his feral form and he “matured” it took the fun out of the character. I also liked Dinobot, because he was a glass half empty guy surrounded by optimists lead by Optimus.

Rhinox and Rattrap all the way. I wish they made a better Rhinox toy. The first one was kind of meh. Rhinox was just cool on a lot of levels, and I loved how Rattrap annoyed everybody. Pretty much all the time.

I gotta say the thing that *first* turned me off of Beast Machines was how they gave Rattrap wheels. He’s an infiltration expert! How do you give him wheels and make him not as awesome as everyone knows he is? That was when I lost interest in that series. But Beast Wars itself was awesome.

What did you think of the new Rhinox and Rattrap toy?

They look great but they were on the tail end of Hasbro’s latest trend of poor quality control and I couldn’t find a Rhinox that could stand on his own without aid.

My favorite moment was the “So Long and Thanks for All the Fish” reference. “Not Wacko… Wonko! Wonko the Sane!”

Which episode was that?

Totally forget… I think the Green Bug type guy went nutters and uttered that line when his comrades declared him to have gone “wacko”.

Doesn’t narrow the search much. XD Maybe I should just watch it all to be sure I remember it right.

I’d recommend you do just that, and write about it on the internet, but…

“In the episode where Rhinox was transformed to a predacon, when Waspanator goes nuts… “

BEAST WARS WAS THE BEST SHOW EVER! RATTRAP FTW!

Never had a chick actually say she was into Beast Wars, but one did let slip she liked Reboot. I was surprised. I barely remember Beast Wars but that strange romance portion helped me discover my “pocket monster”. I just know it.

XD I knew several girls who were Reboot fans too. They were more likely to admit that one.

I’ve often thought it would be cool to have a shirt with Rhinox on it, with the words, “Rhinox is tired of your shit!”

Any fans of, ugh, Beast Machines?

That might well be the best shirt idea ever.

I never saw much of Beast Machines. They want a lot for the DVDs too…

I love Beast Wars! I never got to watch much of it, but i remeber that it was awesome…..hmmm now i have to go and see if anyone has any streaming episodes….

I think there’s a link or something in an earlier comment.

Best moment? Hmm. Ravage, transforming into his tape mode to an awesome guitar solo, would certainly be a contender.

Or pretty much anything with Tarantulas in all his scheming glory. “You’re insane!” “So they sa~ay… BRBLBLBLBLBLBRRR, heh heh heh hah…”

Though the crowner is probably Predafied Rhinox taking out the other Preds one by one before confronting Megatron with a “yeeeees” of his own.

I forgot about the tape mode thing. That was an awesome moment!

The Predacon Rhinox episode was one of the best too.

wait, how old is she supposed to be? cause i used to watch it before school (and/or after), and i’m only like 17.

Haha. This reminds me of when I was still getting to know my eventual husband. He wanted to fool around. I told him to cool it. Then he thought he’d bore me to death with beast wars.. I responded with the utmost ‘GLEE instead, lol :D

Oh, man, I LOVED Beast Wars! (You may now update from “3” to “4” on your list.) I liked Dinobot (the velociraptor, I think that was his name) the most. They probably had him become a good guy so he’d get more “face” time. XD Unfortunately, I never did get to finish watching the series, since they showed reruns so long that I’d stopped watching the show by the time new episodes came out, and then I just didn’t have the time. Now I’m gonna have to raid the interwebs for the episodes…

a perky plump red head who is into Beast wars… can the odds possibly be stacked anymore against Thomas?

Beast Wars, also called ‘Beasties’ up here in Canada for some odd reason. Ah well great show and best of the trasnformers serieses out of them all by far. had one spinoff after it ‘Beast Machines’ that wrapped up the whole transformers saga and cybertron with it. hard to pin down the best show moment for myself, tied between The Return (big spoiler for those who haven’t seen it its at the start of the second season), Megatron and his duck, the resolution of what happened to Dinobot, and the TKO Rhinox did to the whole Predacon ship

He’s just a few panels away from having a Geekgasm.

I am officially your willing slave/fan.

Dude…BEASTWARS?! You’ve brought my childhood rushing back into my mind. Its a good thing.

I remember spending the entire month of august in 2014 re-watching Beast Wars start to finish. I was watching ReBoot too but Netflix removed it from the line up before I could finish it.

The best part, I think, is that Rattrap and Dinobot were voiced by the same guy (along with a third, and maybe a fourth character. This means there are whole scenes where there is basically one person arguing with himself!

The writing of this serie was genius. To this day, I still prefer Optimus Primal to Prime.

If I had to pick a favorite moment. I couldn’t choose… But one of the most inspiring is that western last stand they do with that western movie music… (I even have the track!)

That was pretty cool. Scott McNeil is a legendary voice actor.

And oh snap, dude, that scene was hella tight! Wasn’t that when the Preds pretty much beat the Maximals, and then Megatron’s like ‘HA HA! WE BEAT YOU!’ and then everything starts exploding and then TM Primal shows up and he’s all like ‘My turn!’ and then all the Preds run away because of how badass TM Primal is?

My favourite part was when Silverbolt showed up. Silverbolt is the best.