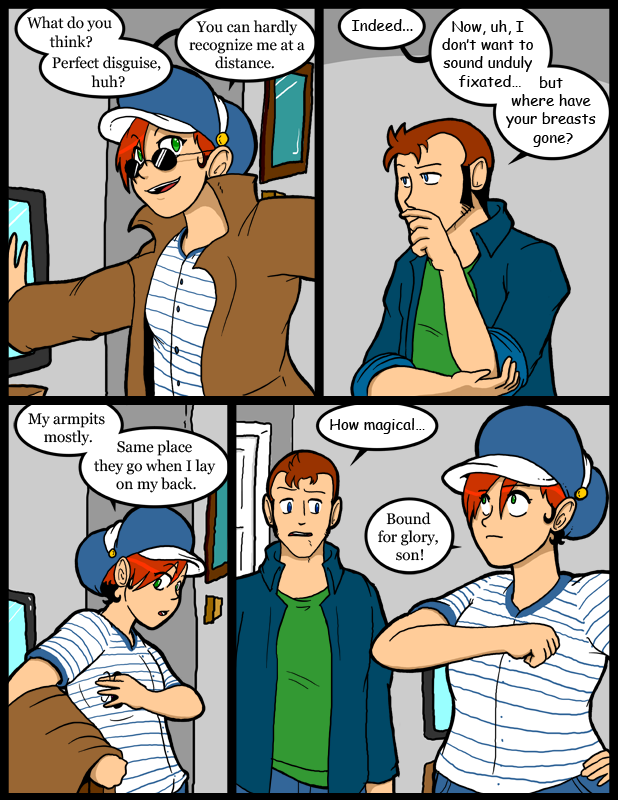 It’s so sad that all the fuss over the last page is explained in such a pedestrian way with this one. I almost wish I had done something insane now. XD

I played all the way through Super Mario Galaxy 2, got all the stars, and all the medals. It’s the first 3D Mario game I’ve ever done that with. Of course it’s also the only 3D Mario game that doesn’t have some fatal control flaw, or camera issue that prevented me from doing so. Even the annoying glider stages can be completed easily with a little practice. In fact the whole game was surprisingly easy. I only got stuck on one of the very last special stages. There’s platforms rotating around a cyclone and it’s really hard to keep your feet under you. I probably died 50 times at least. More than in the whole rest of the game. Even then it didn’t feel like the game was broken. It felt like I was failing to to very simple things properly, which kept it from being too frustrating. Early in the stage you can get 2 1ups so you only lose ground slowly. There was a point where I wondered if this was the stage that ended my adventure though. Of course once I understood how you’re supposed to advance I was able to replicate the actions much more regularly until I finally succeeded.

If you don’t get all the stars you can still see the ending, but if you get them all, and beat the game again, you get a bonus scene. It’s the kind of scene that makes me wish I had played the first game though. XD

I’m collecting all the green star jewels now, or whatever it is they are supposed to be. I can choose to play as Luigi at any time too. I’m not sure what conditions I had to meet to make that happen because I did them all at once. It’s cool that they give you a reason to go back through again. A lot of games give you stuff after you beat the game, but there’s no real point because you’ve done everything already. They should do it like in Chrono Trigger where you can start a new game with all your stuff from before, but that’s as may be. The long and the short of it is that I actually look forward to revisiting the early stages because they are fun and now I have much greater mastery of the controls.

Mario Galaxy 2 is probably the best Mario game ever. I liked it even more than New Super Mario Brothers, and I liked that a lot.

This has been the most intelligent and captivating conversation I’ve seen in like… a year. Also, Carol’s pose and Statement should be on a motivational poster.

Which pose and statement?

… and motivational poster for what?

Maybe for cross-dressing females back in the 1800s when girls couldn’t serve in the military?

Third panel looks awesome. She needs to keep the hat.

Girls in hats are pretty awesome. I put them in one at the drop of another.

‘my arpits mostly’
PURE GENIUS! I had an Ex like that, great fun while it lasts but what’s gonna happen to those bad boys when she’s 50? 60? 70?
She’ll have to tie rollerskates to them to stp herself tripping.

By the time she’s old science will have fixed all of that.

What does the Pharaoh have against BOOBS?

The fact that she’d bind herself as a disguise just to see Thomas either means she really loves him…or REALLY doesn’t want anyone to know she’s dating him. I mean, that stuff hurts like a mo’fo’.

I think it’s a bit of both.

NO! I need story ideas!

Thank god it’s just I that is insane

Carol in the last panel cracked me right up. Something about her expression just makes the joke work so well.

I wasn’t sure it would work till I got her expression right.

Wow, I managed to make it all the way to the current comic?
I read through most of the comic over the last few days; so here is a simple summery of the comic, it’s content, and my opinion of it:

That is a concise review. The kind of thing that looks good on a book cover.

hurray for the beauty of Mario and the namedrop of Chrono Trigger. Not enough people know about the best turn-based RPG that was ever created.

It’s surprising how poorly the DS port sold. It’s one of the greats, but I guess kids have moved on. They should have done a full remake like with Final Fantasy 4. Chrono Trigger would look great with some Dragon Quest style visuals. I’d even buy it again.

I agree with that, hell, I would have KILLED to hear a badass voice actor portraying Magus.

Killed? Killed who? Your father? (should I prepare to die?)

I got a bit of a Eponine Thénadier vibe from that last panel.