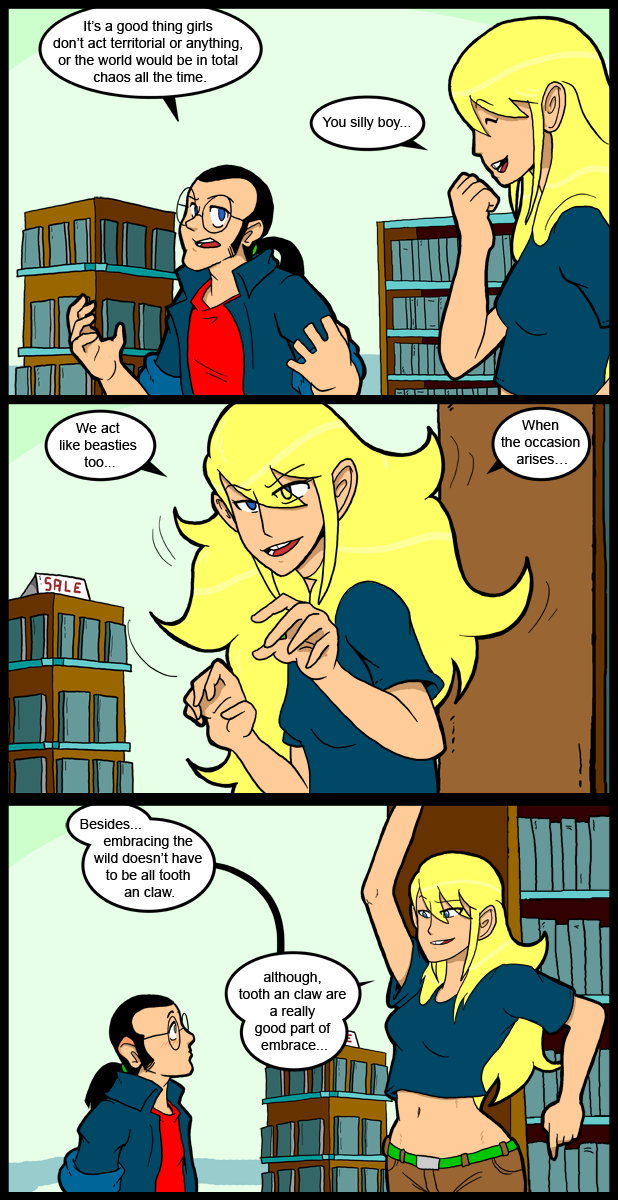 Here’s another page that fucks up the layout.  I’m probably going to have to find a way to fix this because I’m sick of being all cramped in my 8.5 x 11 prison.  At least this one only screws up the twitter feed.

Anyway, I had this dream where it was me and some friends in this old power plant kind of building wandering around.   It was sort of pipes and rust everywhere.  I don’t know why we had been chosen to get the place running again, but we were trying to find this main power control box that could start the place back up.  Eventually someone found it, but when they started to fiddle with it the thing started acting weird.  One of us knew that the settings had been screwed up and the building would explode if it didn’t get rewired.  For some reason they elected me to fix it and then ran away.  I don’t know why I even tried, but I fiddled with the thing a little, poking wires in places and whatnot, till it started to glow and pulsate.  I don’t know what kind of power plant it was supposed to be, but I knew it wasn’t nuclear, so I only had to get far enough away to be shielded from the blast and debris.  I pelted down the corridors and out into the woods.  Once I was far enough in I found a little hidey hole to wait out the explosion in.  I woke up before it happened.

I went back and finally fixed all the errors that managed to slip past me over the last few weeks.  Hopefully I didn’t miss any.

And girls definitely act territorial, but only with other women… men dont seem to be much of a threat to them, I guess, and given a choice I think I’ll keep it that way.

Add a side of Bow-Chicka-BOW-WOW to that order, please.

Not true, girls act territorial towards guys too. When a friend gets a boyfriend suddenly girls nights out become a lot more frequent

Is it just me, or is Nina in the third panel leaning against the shelf, holding onto the top with one hand and indicating Ed to drop to his knees with the other?

(Not that he’d actually need to kneel, though… If anything, dude needs a box or a stepladder)

I return!! I agree Blayze, it sure seems that way… maybe her Harry Potter Fantasy has gotten the better of her? Anyway, not much going on here, (not that you are terribly interested, just mentioning) so I’ve been visiting my opium quite a bit lately… And I do think you need better friends in dreams, dude.

It’s supposed to look like the other hand is on the shelf, but that’s as close as I could get it to look.

Have you ever ready any of the Vorkosigan Saga by Lois Mcmaster Bujold? I am reminded of the book Labyrinth where the main character Miles has to deal with a failed Super soldier called Nine, whom he dubs Taura. It made me happy.

I’m glad you were pleased, but I certainly haven’t ever read those books.

That last pose of Ninas makes me glad to be a man.

Then my work here is done… Until two days from now.

Was anyone else strangly aroused by nina in the second panel? anyone?

If my email is any indication, yes.

I like how Nina’s hair has a life of its own.

I like that Ed is blushing in that last panel.

I like even more that his ears also turned red. XD

Thought she was gonna pounce on him again.

I’m amazed there was enough blood left in the his northern hemisphere to blush.

Gaah she’s sexy. But she’s right girls can be pretty territorial too.