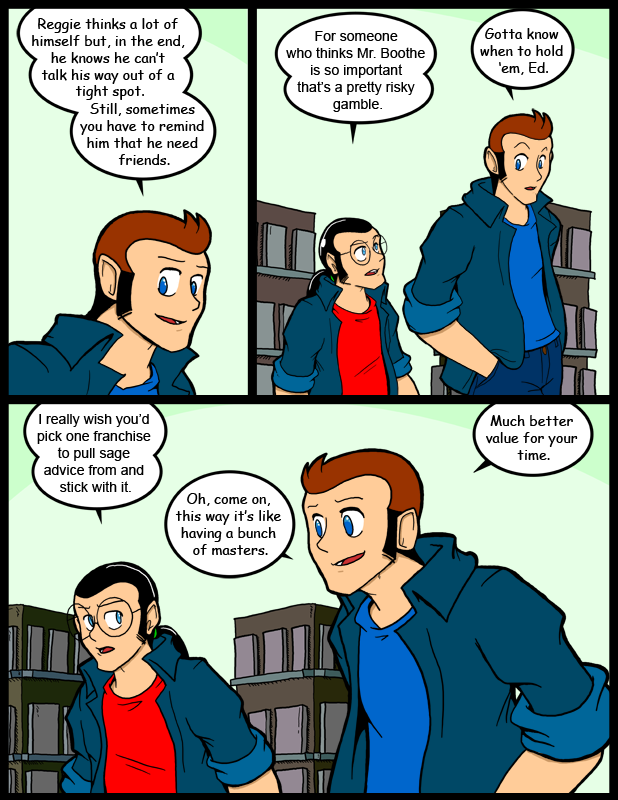 Sorry about the page mix up.  In my grief I mistakenly posted them backwards.  They pretty much read just fine in either order, but I’ll fix it later.

Also, I’m sorry I haven’t replied to your kind comments about Sadie.  I don’t feel I can add anything of value to them anyway.  Most are heartfelt tales of past pets.  So let it serve as a memorial to them all.  I can read them, but by the time I get to the end I’m pretty useless.  The hurt is still too near.  That said, reading them has made me feel better.  I appreciate everyone telling me stories of their pets, be it in comments, or emails.  You all have my most sincere thanks.

We’re all still sad, but it gets easier everyday, you know?  One last surprising thing is that Claws, our old Siamese cat, has been wandering around the house meowing as loud as he can.  Mom thought he was sad that Sadie is gone, but they weren’t special buddies or anything.  I thought he was just being weird because we’re all so down, but then I actually watched him make a round.   He started at her toy box and worked his way around the house checking places she would typically lay down, hide treats, or dig in the carpet.  When he was done he came to me and wanted to be picked up, which he doesn’t do very often.  It’s not a scientific study, but it looked a lot like he was calling out for her to me.

I guess they were just close to each other in their own way. 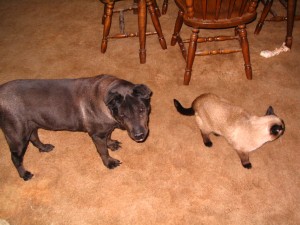 Yep, critters get used to their “friends”, even if it doesn’t seem like they’re that close. It’s the familiar, after all.

I told Mom the other day that I think Claws is a bionic cat…how can he be our oldest pet and have lived the longest?? Props for inbreeding I guess, lol!

Kind of a hit or miss system. Cause Pookie went too soon and was all wonky a lot of the time.

I saw this, and I immediately thought about your recent loss. I hope that you can relate to this, or that it at least brings some cheer to your day.

Many thanks for the thought.

animals, like humans, show love in different ways mate. One of my oldest friends is my bro shane, and every time we see each other, we try to beat the snot out of each other, be it with swords (wooden ones, have no want to kill him) staves, or even our bodies, him with his fast blows and me with a considerable bulk and impressive grip and grapple, until one of us yields, after which we get some food and zone out with games or projects. The best thing about it, really, is that we both laugh and enjoy ourselves and know that one would die for the other.

Animals are the same way, Cats and dogs are typically thought of as enemies, but I’m sure that if Claws was in trouble Sadie would be first to rescue him if she knew.

You missed an S.
It’s supposed to be “he needs friends” not “he need friends”.

Just curious: Are you going to switch those two strips around?

Are you sure? Maybe Thomas is just keeping it real like the kids do these days, with their Sony Walkmans and Pac-Man video games.