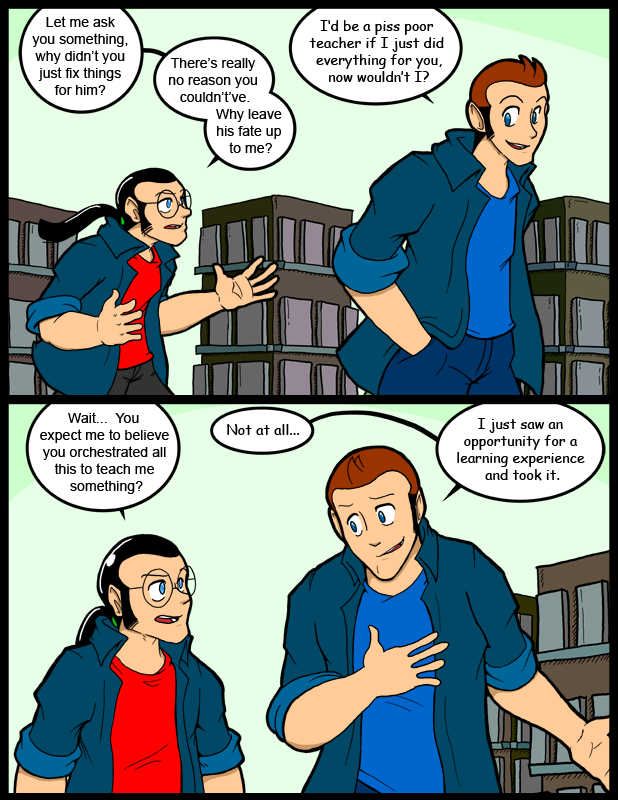 If you worked with Thomas for a long time, completely unaware of his machinations, it probably wouldn’t be aggravating, but if he kept exposing his plans to you I think the reverse would be true.

I had this dream where I was in a Target.  It might have been the one I always end up at in my dreams.  I can’t remember how I ended up there, but there were events that lead to me going.  I was with this amalgam person who was really two people I know, but it had all the least useful traits.  There was this shelf right in the front of the store that had clearance games on it.  Stuff like God Of War for the PSP, Dungeons & Dragons PSP (I think that exists…), and some other titles I wouldn’t normally buy.  They were only forty cents though, so I was like ‘may as well try them out for that cheap’.  So we didn’t go in to the store proper.  Instead we just took the games and headed to checkout.  While we were standing in line the clerk was singing to himself, but he was almost perfectly mimicking an autotuner.  He was really short and seemed to be in a very bad mood.  When I got to the  front I said something like “Your singing sounds almost exactly like it’s being autotuned.”  He just kind of grumbled something back at me and started ringing me up.  Just as we’re going to pay some guy comes over and leads the kid away.  No explanation.  So I’m left standing there mid-transaction.  We wait for a while and no one explains anything, or asks us to a different line.  Slowly the other clerks get led away as well, and everybody is just kind of left standing there, wondering what to do.  The people who elect to stay wait for a really long time.  Finally I’m like “Who here has been waiting over 5 minutes?”  The crowd, mostly of old women, all raise their hands.  So my amalgam friend and I go off to the office area to try and find out what’s going on.  As near as we can tell almost all of the staff has been arrested, except no one has contacted the head office to make sure the store will still function.  The police just started arresting everybody quietly disguised as managers, but leaving the store to run itself somehow.  A few people just start wandering out with what they want, but I can’t bring myself to do that, so we leave defeated.  I woke up as we were trudging through the snowy parking lot, looking for an old truck I used to drive.

For those of you worried about Sadie, she made it through the night, and was up walking around again.  She’s clearly still not feeling well, but I was sure we were going to lose her last night.

Man Thomas is a true Tactician

Opportunity. Random short vowels in the middle of words suck, I know.

I must have rushed when I entered it. Usually the spellcheck catches that stuff.

Why hasn’t Thomas every considered becoming a lobbyist, his skill at manipulation is worthy of the profession, but then again it might seem too much like work to him.

Probably would have a hard time dealing with politicians. We often hate the ones most like us.