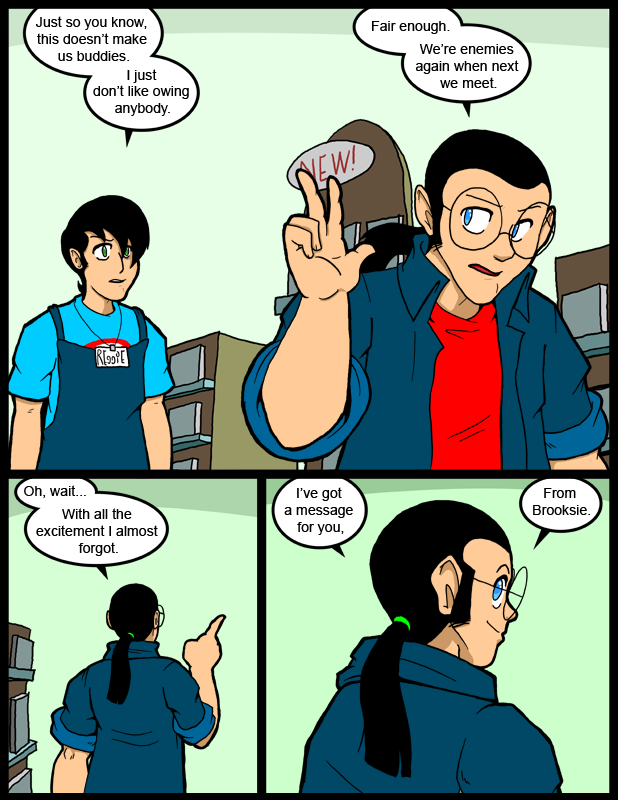 Okay, so, I had this dream where I was running around in a theater.  It was really weirdly built and too big.  When I say theater I mean olde timey movie theater that still has a stage, but the screen was fitted into it later.  The building had way too many levels.  You could go from one to another on a series of switchback stairs that ran up both sides.  Each one emptied out via a door portal with a dim orange bulb in an ornate shell lamp.  I wasn’t alone.  I was playing what amounted to laser tag throughout the building with random people, some from my life, some not.  If there was a point to the dream I don’t know what it would be.  I never got more than the layout and the playing tag.

It’s early yet. Maybe onece he gets a good head of steam going.

I’ve worked retail for a long time. Reggie, for all of his arrogance and over powering personal traits, is far from the worst I’ve dealt with. Kinda like Brooksie said earlier, the world’s supposed to have assholes. The trick is figuring how to pick the one that smells the least. I’ll take an honest enemy over a self serving friend any day of the week.

That’s a philosophy I can get behind.

My weird dream yesterday: I went to a custom car show with a friend of mine. It was getting late, and the show was about to close, so we headed for the exits. But we got separated, and I just barely made it outside because I tripped the emergency sensor on a garage door. I was worried, because my friend was epileptic, and I thought he might have been stranded due to having a seizure. But I couldn’t find my car, and then the city flooded. I couldn’t flee uphill, because they were setting up a roadblock, with a machine gun. At some point, all of the ridiculousness started to add up. The friend in question had passed away years ago. The car I was searching for was a ’95 Chevy Impala SS, a car I always liked, but never owned. So I came to the obvious conclusion that this was a dream, and noped my way straight out of that. (Many of my dreams suck. As a result, I often recognize I’m dreaming, and I’ve learned to will myself out of a dream, don’t ask me how. The worst part is, I sometimes just wake up to another dream. I’ve had to wake up at least three times to get back to the real world. And that’s assuming that the SCREW is a thing.)
On a semi-related note, it once took a registered nurse five minutes to find my pulse. So I never rule out the possibility that I’ve died and no one noticed.